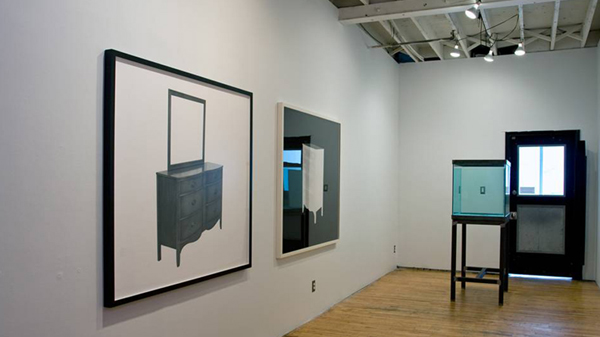 I recently moved from Brooklyn to Toronto, ON, which is a fine city.

I like cities. I only lived in the country for a year when I was about 12 years old.

I have this problem (a lot of people do): I am always trying to describe or critique a city by comparing it to another. This reminds me of something I read in a book of jokes put together by Toronto artist, and publisher Josh Thorpe*.

Q: WHAT DO YOU GET WHEN YOU CROSS THE STREET WITH A CHICKEN WING?

Which, the point is, when you start comparing all the incongruities and congruities you are more likely to write poetry than a travelogue.

People ask me if Toronto is like NYC (a lot of Canadians ask me this). I take the bait, of course. I say Toronto is more like Brooklyn — if Brooklyn were on a lake somewhere in the Midwest instead of on the East Coast — if it wasn’t in the middle of a bunch of other huge cities, on the Atlantic Ocean, and the closest you can get in North America to Milan, Paris, Berlin and London.

This is true philosophically, if not entirely geographically.

View of vinyl wall, part of “Appropriate Follies, A new installation by Derek Liddington and Stephen Lavigne” , 2008, at XPACE. 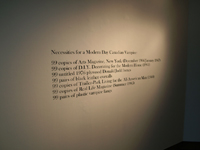 So, whatever... Toronto is a world-class city.

There are good art galleries in Toronto, probably more than Brooklyn where there are many great artists, fewer galleries. This is because there are a million art galleries in Manhattan (just across the Williamsburg Bridge) where it’s more traditional, profitable and prestigious to show. That’s, like, 10 galleries to every artist in Williamsburg, Greenpoint and Bushwick combined. Manhattan’s Chelsea neighborhood is paved with galleries, and looking at the art there is both exiting and spiritually exhausting.

In Toronto, it has taken me some time to find the places I like to look at art. The local magazine guides provide little information beyond a show title and a location. And the spaces I like are not often close together, so it’s got to be a decent day if I want to see multiple shows. Also, I don’t recognize most of the artists’ names in a city mostly devoted to showing local art. I am learning about Canadian artists.

I usually only read supportive materials after I see a show. When I go to look at art, I go into a show like it’s some kind of Playstation game. I have to negotiate the environment to get the special power or treasure, and each room has its own set of rules. I know I get this from playing too much Dungeons and Dragons...

DUNGEON-MASTER: You enter a dimly lit room, there is a door at the other side of the room, but otherwise the room appears empty.

HALF-ELF FIGHTER: This seems suspicious. I’m going to use my Eye of Grotus charm to see if there are any invisible creatures before I proceed...

I also get it from Robert Morris’ ideas that he wrote about in a series of articles called ‘Notes on Sculpture’ published in Artforum Magazine between 1966- 67. Morris gives preeminence to the relationship of the viewer to objects and the context of their presentation. Morris, the artist, tries to control the situation (through manipulations of scale, position of the work in space, light, etc) while viewers navigate the gallery, wresting control of the meaning through their experience.

For the artist, the art consists of the actions and experiences involved in the work’s creation. For the viewer, the art is experienced as the portal (or membrane) between the natural world and the imagined world. The artist is a ghost haunting her own show, and the work is unfinished until the viewer completes the narrative.

My friend, Jacob Hartman once described his early art experience. As a teenager, he was taken to museums around Los Angeles (maybe by his sister) where he would look at the paintings, installations and sculpture. With no education in art history or theories at this young age, he would find the art indecipherable and strange. He loved this feeling, and it would later influence all the art he makes.

I viewed the following shows before writing this article:

Josh Thorpe lives and works in Toronto, ON.

*All jokes by Ryan Driver.