He was a big guy-at least 6’2″ and over 200 pounds with a sneer on his face and a prominent scar near his lip line. Defiantly, he strode up to the teller counter in the small South Bronx branch of Manufacturers Hanover Trust and pushed a piece of paper across the counter to teller James Gardner.The note read: “Give me all your money. I have a gun.” Gardner glanced at the note, and then coolly shoved it back at the would-be bank robber with the curt reply: “Beat it.”

Still without a word, the note passer picked up his note and abruptly walked out of the bank. 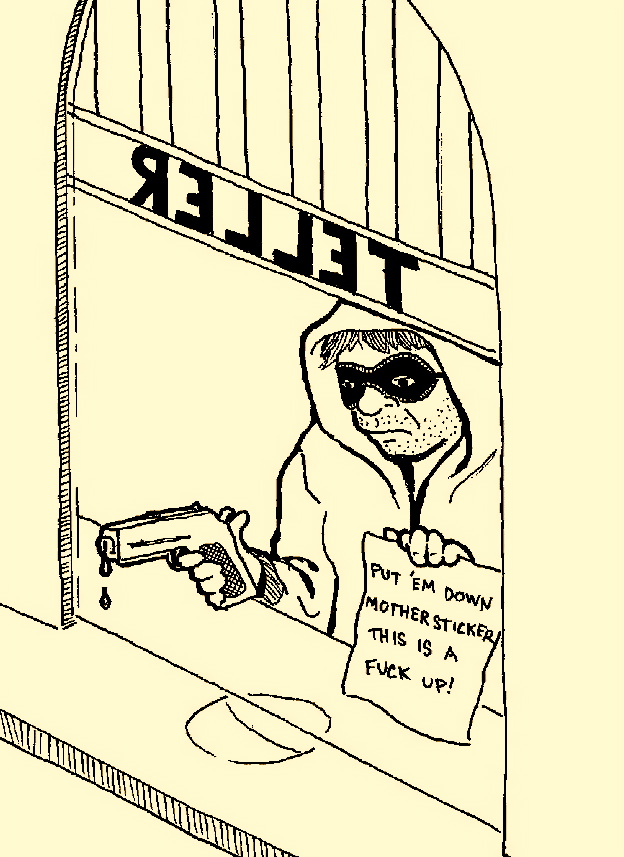 Doesn’t seem credible that the “tough guy” should turn pussycat, but anything can happen when a bank robber attempts to use a note to make a cash “withdrawal.” And strangely enough, a simple vocal rebuff from a teller-no matter how inane or pointless it may be-more often than not has foiled would-be robbers at Manufacturers Hanover branches.

In Brooklyn, teller Bernice Williams’s response to the note, “I have a bomb, put your big bills in the bag,” was to remind the note passer in a firm voice that he had to present his passbook before she would give him any money.

With an incredulous look on his face, the would-be robber walked out of the branch. He wasn’t apprehended, but he didn’t get any money, either.
Most tellers’ reactions to note passer demands are usually spontaneous and they can’t explain their “illogical” responses.

“I don’t know,” says teller Mary Clarke, “I couldn’t think of anything else to say at the time. I guess that’s why I told him he would have to go see the guard on the platform.”

This attempted holdup took place at another Bronx branch of MHT and again the note passer picked up his note (“I have a gun. Give me all your money”) and walked out of the branch.

Teller Pat Beckert foiled a planned big heist at her midtown branch by simply referring the note passer to “another bank.” The extortioner’s note read: “I have a bomb. Give me $10,000 in hundreds.” To which Pat replied: “I don’t have that kind of money. Try another bank.”

Even more brazen was Marion Gregg. Passed a note demanding “all your money,” she told the holdup man her window was closed, then dropped to the floor and activated the alarm. The man walked out of the branch, but was apprehended later by the police.

The would-be thief who approached teller Irene Santos at MHT’s Westchester Avenue Bronx branch didn’t pass her a note, but he might have done better if he had. He told her he had a gun and wanted all of her money. But Irene, who has perfect hearing, replied: “What?” To each subsequent demand, she again pretended to be hard-of-hearing until the puzzled holdup man disgustedly walked out of the branch.

Although you wouldn’t necessarily know it, the would-be thieves are often just as “scared” as the bank tellers-also more confused.

One team of intruders (a man and woman) entered MHT’s Melrose Avenue Bronx branch. The woman got in line to cash a check while the man strolled over to teller Marie Cirillo to inform her: “This is a holdup. Nice and easy and never mind the alarm.” Immediately, Marie dropped to the floor and, at the same time, pulled the alarm.

Confused but still cool, the holdup man peered over the counter. When he couldn’t find Marie, he stepped back, looked around the bank for a few seconds, then walked over to his companion in the other line and in an almost apologetic tone, said to her: “Let’s go, I don’t know where that girl went.” Now thoroughly bewildered, both walked out of the bank.

Some thieves have unwittingly derailed their holdup attempts simply by “overwriting” their notes. They fail to keep the message short and to-the-point. Kenneth Stevenson was handed the following lengthy missive: “This is no game. I am not alone. Don’t act stupid. This is a holdup. Don’t sound the alarm. Fill the bag with big bills. No small ones. I know the score...” Etc., etc.

You guessed it. Before teller Stevenson had finished reading the note, the suspicions of the bank guard were aroused. He vaulted over the counter and apprehended the verbose crook.

Of course, the large majority of bank intruders are usually bluffing when they claim to have a gun or bomb. Most often the bulge in the pocket is nothing more than a hand. Some also pull the old “coat-over-the-arm-trick.” The coat typically conceals nothing more than an arm.

Despite the bluffers, blusterers, and blunderers, however, Manufacturers Hanover cautions all its tellers to “take precautionary measures” in dealing with professed holdup men. In short, “Don’t do anything foolish; he MAY have a gun.”

Teller Linda Rodriguez can testify to that. The man who invaded her branch pointed an honest-to-goodness gun at Linda and when she didn’t move fast enough for him, he fired the gun point-blank in her face. There was a sharp report...but Linda is still around to talk about it.
The gunman was a pussycat, too. His gun fired blanks.