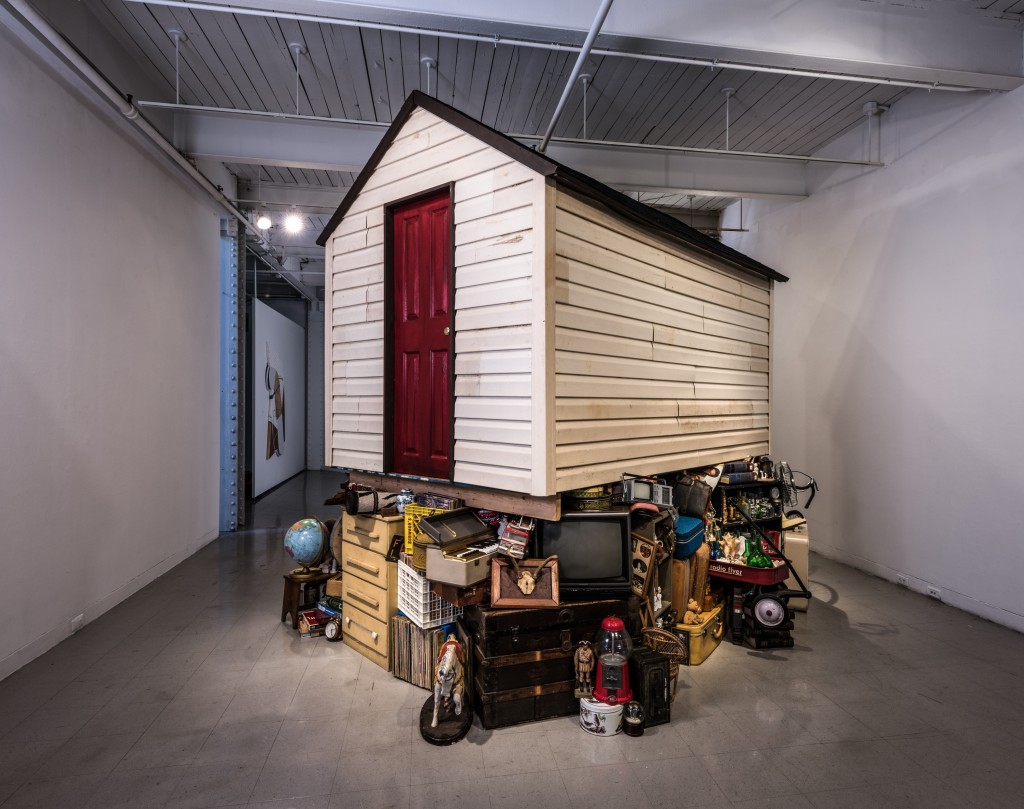 Editorial note: “Built on Buried Walls” was exhibited at Meyerhof Gallery in Baltimore in 2015, as part of Jason M. Stewart’s installation, “Four Voices.” Read below for Stewart’s perspective on this individual work.

Built on Buried Walls explores the complexities of the sentimental relationships between objects, memory, and place. I am the only child of separated parents, whose marriage ended before I was born, and I spent much of my youth traveling between different houses. This flux of living conditions has engineered in me a specific interest in how one honors their past through the objects they keep. Specifically, I am interested in the items that do not receive the privilege of being in lived-in spaces; instead, they are packed up and stored away like time capsules that are opened once every few years, only to remind one of an inability to let go.

The work is inspired by a plaster statue that has lived in my studio for over 6 years. This statue was acquired during a thrift store visit one Saturday afternoon. There, I spotted the 18 inches tall plaster of the Virgin Mary. It rested sideways on a bottom shelf, in a rarely visited aisle of the store. On the base it read “$3.95,” and upon inspection, I found that parts of the figure were significantly chipped and worn and someone had tried to “touch up” the face with a blotchy yellow ochre and burnt sienna flesh tone. I found it interesting that this object, tattered and damaged, would be donated and sold rather than thrown in the trash. I should point out that I am not a religious person, so I felt no connection to this object for its Christian references. Rather, I bought this object because I couldn’t help but speculate on the past life it had lived and how meaningful it may have been to a previous owner who could not throw it away – instead choosing to donate it for resale. 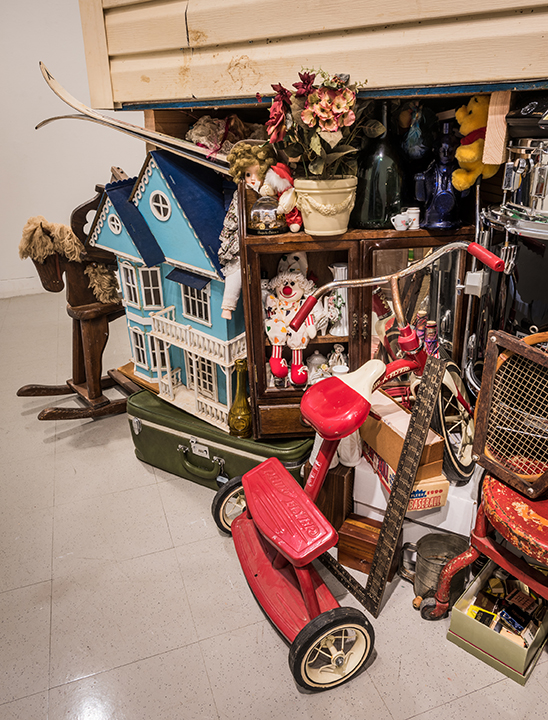 The more I sat with this object, the more aware I became of the various items I hold on to that are relegated to my basement. In many ways, it is most appropriate that they are confined to this space. Gaston Bachelard wrote in The Poetics of Space: “The cellar dreamer knows that the walls of the cellar are buried walls – they have the whole earth behind them. And so the situation grows more dramatic, and fear becomes exaggerated.” And with this exaggeration in mind, I began to see the basement for its mystery, darkness, and function. It is the place where creepy-crawlies live and laundry is cleaned, and it is buried in earth – like a grave. But it is also the foundation of the home. Our everyday lives exist above this space and its walls provide structure, much like the objects in the basement provide structure for our character and history.

I consider Built on Buried Walls to be a sort of domestic theater. There is a strong narrative that tells a story about a story that doesn’t exist. It is a tableau that references a person or world that has been removed, or has never actually been present. 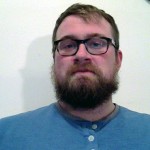 I collect objects from multiple people and places so that these objects read as relational to a variety of generations. Before beginning the piece, I struggled with whether or not to include windows on the house. I wanted to increase the suspicion about who might live here; who might own this “stuff.” In the end, I constructed the house so we cannot see inside and we cannot open the door – a closed door will always hold more things than an open one. To verify what is inside would kill the imagination of what does or does not exist.

Jason is an interdisciplinary artist working in painting, sculpture, and installation. Stewart received his BFA from Rowan University and his MFA from the Maryland Institute College of Art. Stewart’s work addresses the idea of “place” through multiple voices – each voice being a re-experience or re-arrival to the idea of place. His handling of an idea through different modalities strives to address the formal concerns of materials, while also alluding to the mutability of the human mind. In addition to his art practice, Stewart is an educator, songwriter, and scenic designer.  Stewart has displayed work throughout the East Coast – including the Newark Museum in Newark, NJ.  Additional works can be seen at www.jasonMstewart.net.

More from Author
Comments on “Built On Buried Walls”
No comments yet. Be the first!