Art Editor’s Introduction:  This is the first in a series of chained interviews – where one artist will select another to interview, that artist will, in turn, choose another.  Each artist will control the content and format of the article, and the project will continue until the chain is broken.  This experiment is born from a desire to add chance and surprise to the curatorial process and to allow artists to frame discussions about art they want to be talking about.  New voices discussing new art – that’s the goal.  To begin, I’ve asked video artist, Jeremy Drummond, to seek out a project of particular interest.  He interviews the collaborative team of Kathryn Mockler and David Poolman about their latest project The Reluctant Narrator via email.

Q- Murder, the first of 5 videos in this series, begins with the narrator proclaiming that “It’s not a good idea to be in the same room as someone who’s about to murder you.” While this initial statement is obviously agreeable, absurdity seems to collide with “reason” in all of the videos comprising The Reluctant Narrator. How did this approach to narrative construction develop?

A- A few years ago we both read an article in Harpers magazine that quoted Donald Rumsfeld’s formula for dealing with the media.  He had instructed his press secretary, “to begin with an illogical premise and proceed logically to an illogical conclusion.” We thought this would be an interesting way to structure a collaborative project.Initially we had envisioned the collaboration to be a text/image based project where Kathryn would write a collection of absurdist poems and David would augment the narratives with a series of images.

A few paintings resulted from this initial concept, but then we realized that we could push the narratives further through video. 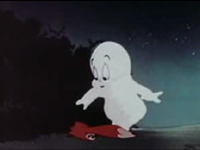 Q- Beyond the absurd nature of the narrative, it is clear the relationship between image, sound, and text has been carefully executed. The visual aspects of this project rarely illustrate the words of the narrator. Instead, they produce a gap between what is seen and what is heard where the audience must draw connections. One could argue this gap is what often separates “art” from other forms of visual information – could you speak towards your process/intentions in this regard?

A- We are interested in investigating a narrative space where the viewer is placed in the position of having to do a little work.  There are occasionally contingent connections between image and voice-over, but we are trying to create tension in the gaps between what you see and what you hear.It was also important for us to present these stories in as short a time as possible – five narratives in eleven minutes.  We wanted the compressed length of each piece to create a sense of disorientation so that by the time you think you’ve got the narrative figured out, you’re onto the next video.

Q- In relation to the previous question, each video in The Reluctant Narrator employs a different approach to visual information – Murder is constructed from appropriated information, Lucky incorporates still images, and The Saddest Place on Earth is a blurry representation of various scenes. How were these decisions made and to what extent do these decisions transform the narrative?

A- We were interested in creating a sense of imagined and also familiar or “lived” spaces.

As children we were both obsessed with this Casper cartoon.  It was probably the first cartoon we had seen that dealt with death in a frank manner.  What’s interesting seeing it as an adult is picking up on the references to WWII and to the blitzkrieg.

With Lucky, we were trying to construct a character that contradicted our collective vision of what a “rapist” is.  We used “snapshots” of domestic imagery such as dirty laundry, houseplants, and a shower curtain to suggest that our construction may be false.

The Saddest Place on Earth is edited with establishing shots and cutaway shots from adult films.  We were interested in the banal imagery of these shots – the full moon, the taped-off crime scene, the generic city. Many of these are stock images used as filler between the sex scenes. In The Saddest Place on Earth, the pairing of the blurred appropriated footage with the oblique narrative is an attempt to create unease or disorientation in the viewer. 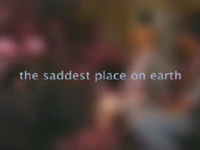 Q- Is The Reluctant Narrator complete? Or is this intended to be an ongoing body of work? Is there a particular video you feel best achieves your desired intentions?

A- The project is an ongoing series of work.  Each video manifests our intention to a different degree.

Q- Beyond this project, the two of you have a history of working collaboratively – one as a screenwriter and the other as an artist. How does this particular collaboration differ from past experiences and what are the benefits you’ve discovered from this process?

Kathryn:  Unlike film, where there is an established hierarchy and roles are strictly defined, the process of creating this video series for me felt much more freeing and equitable.  In addition, because film is heavily reliant on funding, filmmakers often must make compromises with their original concepts in order to conform to budget constraints. This was not an issue in The Reluctant Narrator.

David: Collaboration makes up a large portion of my practice.  Since 2000, I have worked with musicians, curators, writers and artists in a variety forms. I enjoy working with people from diverse backgrounds/interests as it always adds a new dimension to the process of making work.

Q- Do you intend to collaborate on future projects? If so, is there anything currently in process?

A- Right now we are finishing a new video based on Borje Salming, one of the first Swedish hockey players to play in the NHL.

We have two short films that will be shot later this year, and we are planning Part 2 of The Reluctant Narrator.

Q- Where can people go to learn more about your work?

The editor extends special thanks to Jeremy Drummond for beginning this series for ducts.  Readers can learn more about his work at www.jeremydrummond.com.

Please join us for the Summer 2009 issue of ducts to read the next segment in the series: Kathryn Mockler and David Poolman’s interview of the artist (or artists) of their choice.