My father lay on his marriage bed wearing sweatpants, Stanford red, pulled high over his diminished gut to accommodate the colostomy bag, and a white polo shirt, freshly laundered and pressed. White sneakers, brand spanking new, snuggled together at the base of his useless legs like baby seals. His wife, who rarely left his side, had stepped out. To fill a prescription maybe? The rest of his family, a few of his children anyway, stayed with him in the immense house he shared with her and Willis, their noble hound, and Sam, their talking bird.

My father stirred from his drug-induced sleep, agitated; the British National Health Service was pissing him off. “They still owe me twelve pounds, and those ruddy bastards need to know that I intend to collect.”

A granddaughter sat in an armchair beside his bed. He wondered which of his four children she belonged to. Could she be a patient? Definitely a patient. The shiksa child of some English mine executive, though why anyone would bring a child to this part of Africa was beyond him. So they had him doing pediatrics now, what a waste of his talents. He was, after all, a Fellow of the Royal College of Physicians. “Show me one other bugger in this hospital with the letters FRCP after his name,” he said to the child, who didn’t look at all sick.

The child said she didn’t know any buggers. My father smiled sweetly and reached for her hand. So much commotion on the ward, people coming and going in the anterooms, must be upsetting for one so young. “Tell me something about yourself,” he said kindly. “Do you have any Welsh blood in you?”

“Not a drop,” said the woman sitting beside the child. Now where did she come from? Must be the child’s mother. American accent. “But we could have her read a few verses of Dylan Thomas if you think that would help.” 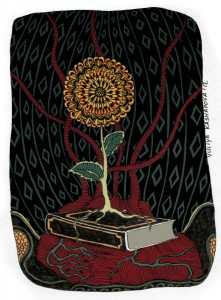 My father smiled again, as if he was either amused or impressed, though he may have been recalling a dirty limerick he had memorized, or a nurse he had fucked forty years earlier while my mother waited for him in their marriage bed. And then, with the light of that smile chasing the fear of death from his face, he closed his eyes.

For a few beautiful moments, or maybe just a split second, he gazed at the lovely profile of Jehan Sadat, First Lady of Egypt, official hostess of the Second International Symposium of Electro-physiologists. Mrs. Sadat stood at the podium and thanked him for traveling all the way to Cairo. As the guest of honor he sat in the chair to her right, ready to present his highly anticipated paper on recent advances in lithium-powered pacemaker technologies to an assembled audience of thousands. But the noise, the dysrhythmic clapping of hands, the clicking of cameras, the pumping thump-thump of blood traveling through arteries, like old people inching along a Florida freeway at rush hour; the noise distracted him.

“How’s it Buster?” said a familiar voice. South African accent, lyrical and crisp, like his own. My father turned his head toward the voice, his eyes open and alert. There in the doorway stood Malcolm Portman, another famous electro-physiologist.

“Good Malcolm, good,” he said, delighted to see his old friend and colleague. “What did you think of that talk?”“I think,” said Dr. Portman, casting a furtive glance at the woman sitting beside the child, “that the beauty of morphine is that it eradicates all the pain. At this point that’s all that matters, right Buster?”

An obdurate mass of carcinogenic cells, the legacy of thirty-two years of smoke and ash, had claimed most of my father’s right lung, and its crablike legs were crawling swiftly up and around the spiral staircase that had once been his spine. Words scuttled about his morphine-addled brain like ants at the base of a mountain too high for them to climb. His eyes moved slowly, over the beige carpet (Oh gosh David, it’s ecru, not beige, his wife would have said had she heard his thoughts), and bouquets of flowers, heaps of happy hyacinths and plump pastel peonies, arranged in baskets beside the bed. Flowers with no scent. Plastic? No. Definitely silk. A pair of shiny white shoes at the far end of the bed, attached to some bugger’s feet. A flash of anger passed over his ashen face.

“Why are those shoes on the bed?” he asked the woman sitting beside the child. Another child had appeared, also female, but older than the first one. She smiled and said “Hi Grandpa,” then sat on his bed and held his hand.

He recognized this one, definitely one of his grandchildren. How many did he have? Tears filled his eyes. “I’ve always loved you, you know,” he told her, his voice shaky. “Of course Grandpa, and I love you too. We all do.”

My father looked past the granddaughter he recognized into the empty space between fake flowers and stuccoed ceiling and said to a presence visible only to him, “Pluck from the memory a rooted sorrow, raze out the written troubles of the brain.”

“Okay Grandpa,” the granddaughter said. She turned to look at the woman. His daughter? He didn’t recognize any of them. Pain, a constant companion for as long as he could remember, had served him well. A lifetime’s worth of chronic illness and its cohort of nasties had been his security blanket, woven from the stuff of his heart, lungs, intestines – from the very core of his being. Pain, his noxious pacifier, was also the mother of his many inventions, the savior of millions. The pacemaker he helped develop back in the early seventies, after his first myocardial infarction, had kept him alive. A subsequent series of milder attacks had left his heart scarred. Without the pacemaker it would beat like a bag of wriggling worms, pumping blood in all directions and no direction at once, the pulse in his neck plopping along like a string of pearls pulled through fatty sausage casing.

The metal box implanted in his gut was not one of his babies, but the one tucked under the skin of the upper left side of his chest, well, that was surely one of his, if a few generations removed. The former, a defibrillator about the size of a pack of cigarettes, sprouted wire leads that stretched like spider legs from just above his left hip to the base of his heart. The latter, a metal box about the size of a book of matches, also sent wire leads to his heart, but these had corkscrew-like ends that twisted deep into scarred cardiac muscle. Rhythm regulators. Ba-dum, ba-dum, ba-dum. He and his invention, much like he and his second wife, had a symbiotic relationship; the device needed the doctor in order to exist, the doctor needed the device in order to survive. So far it had worked wonders; he should have died ages ago. My father stared past his granddaughter and, with vital voice and vapid eyes, said to a presence visible only to him, “And all our yesterdays have lighted fools the way to dusty death. Out, out, brief candle.” “What candle Grandpa?”“He’s quoting Shakespeare,” said the woman. “One of the tragedies.” “And with some sweet oblivious antidote, cleanse the stuff’d bosom of that perilous stuff which weighs upon the heart.”“Macbeth?”My father nodded. “Act five, scene three.”“That’s right, the woods are coming,” the woman said, hoping to make him smile.He didn’t smile. Instead, he paused, his head still, brows pulled together tight, as if to picture the scene. “Where’s the . . .?” he started to ask, his eyes once again alight, searching. “The dog?” the woman asked, attempting to guide him through the woods.My father shook his head. “The bird?” she asked.“The wife,” he said.“She went to the pharmacy to fill your prescriptions. She’ll be back soon enough.” His eyelids closed slowly, but before he could sink into sleep the woman said, “Dad, why Macbeth?“Therein the patient must minister to himself,” my father said, to no one in particular.