The struggle with my car’s ECON has been going on for a year now, with one more to go on the leash, I mean lease. ECON’s been good to me, performing above expectations. Whether it’s been good for me is another question, judging by the amount of attention it demands and the somewhat tawdry nature of the relationship.

It’s hard to ignore, that big green button called ECON on the far left side of the dash. When I pushed it the first time, nothing appeared to happen except an announcement, in the “multi-information display,” that ECON was on. Nothing changed, not on the dashboard nor yet in behavior or conscience. I was forced to the owner’s manual for enlightenment: the ECON button, it said, makes the accelerator pedal less responsive and partially thwarts the A/C, among other, more arcane mechanical depressions. In other words, it’s a simple yes/no decision. I save some fossil fuel, or I don’t – morality at the push of a button.

If only Honda had left it at that. But no, they had to go and make good and evil obvious. They had to make me feel guilty every minute of drive time. I can no longer blithely burn up the earth as I drive to and from my virtuous second life in Maine.

In short, I cannot not look at the dashboard.

I should first set the stage and say that the dash is almost entirely digital. I can get to a clock face that looks analog, but it requires several punches at the Menu. All the rest of the indicators are numbers and graphics, mostly white but with shadings of blue here and there. Very hip, very appealing, including no fewer than three gauges to indicate fuel consumption.

The first one sits squarely in front of the driver, and since it’s designed for a younger, visual generation, I’ve learned to ignore it. Two coaching bars (so-called in the owner’s manual) straddle the digital speedometer like traffic lanes, aiming at some vanishing point of perspective and symbolizing, I presume, the lure of the open road. Upon acceleration the bars turn a violent blue like nothing in  nature; thence they retreat to an aquamarine state of Caribbean grace as performance improves; and they finish on the bright green of trees in spring (way too obvious, Honda) when performance is exemplary, say coasting downhill. A pretty picture indeed, like two lava lamps firing and fading, but not a serious tool for guilty Boomers.

The other two indicators grab attention as if the dash featured a peep show. The one just to the right of the coaching bars is a horizontal line of lozenges running on a scale marked 0, 35, and 70 miles per gallon, each lozenge slightly tilted to the left. The line lights up and advances right when I’m being a good boy, and blinks out to the left when I’m transgressing. This happens more or less in real time, an instant judgment on my abilities, my world and life view, and probably my Calvinistic upbringing. The lozenges queasily fall to nearly zero as ECON tries to climb a hill, they triumphantly butt up against 70 as we coast to a stop for a red light. After a year of staring at them, I see lozenges in my sleep. They bear down on me like 18-wheelers. 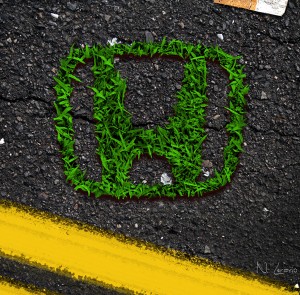 The third and final indicator is the most terrible. Whereas Indicator #2 is imprecise, with but three stages of godliness, Indicator #3 destroys any vestige of happy ignorance. A real digital read-out refreshes itself several times a minute, a precise and brutal miles per gallon that celebrates or chastises down to the tenth. It shows virtue calculated over distance: real Average Fuel, the fleeting tyranny of the accelerator extended through time. That’s the number I’m fixed on. At the start of every trip, and sometimes in the middle just to test the variables, I re-set Indicator #3 (Trip A or B!) to measure how my performance is evolving. Possibly, ECON is altering my genes as I drive.

My worst performance, besides the zero of a traffic jam or stop light, has been 5.3 mpg as we groan uphill, my best a Hallelujah of 199.9 mpg while coasting down on a re-set. ECON records no higher rate, to protect vocal cords perhaps.

ECON achieves some of its miracles by having no power. As I approach that hill in Waldoboro, I no longer use the passing lane but immediately slide to the right. Everyone overtakes me. Maybe they laugh at the old guy in his little car. To their mind’s eye I might as well add hunching forward and gripping the steering wheel with hands at ten and two. I’ve already got the graying hair.

I should also say that while I may be slightly obsessed with ECON, I’ve not yet succumbed to the full menu of hypermiling. Yes, I observe the speed limit, eschew the A/C, anticipate stops miles in advance, and generally acknowledge that the brake is the enemy. But I’m not yet so ardent as to woo ECON into any more of the 109 tips I found on one website. For example, I won’t be attempting #55, Engine Off Coasting (EOC), which advises: “In non-hybrids, EOC is considered an advanced technique and should not be attempted until the skill developed (sic) away from traffic. In addition, coasting with the engine off is illegal in some areas.”  On the other hand, maybe I will try #58, Pulse and Glide, or even #108, Listen to Slower Music, when I’m feeling bad about exceeding 55 on the turnpike and using cruise control on hills.

Other drivers of my ECON, of course, set the enterprise back. One heavy-footed daughter reduced ECON to tears (and 35 mpg) following a trip from Boston to Deer Isle. Dear, un-hypermiling spouse drives around town and I see an alarming decline in Average Fuel, although in her defense, ECON suffers greatly in stop-and-start driving even under more fanatic ministrations. And therefore, yes, I spend the whole four hours driving to or from Maine regaining respectability, obsessing over tenths, despairing as Waldoboro drops me a whole point, cheering as I coast down to the toll booth in Kittery and get back 0.4. And I’ve not figured out why I seem to get better mileage coming back south to Massachusetts. It can’t be. It’s the same route, same hills and traffic lights. I must not be accounting properly for winter blends of gas, under-inflation of tires in the cold, head- or tail-winds, the number of books I’ve packed, the number of Trader Joe’s frozen entrees in the ice chest, or how anxious I am to compensate for that day’s news about climate change.

So this is personal. I look at those damn gauges several times a minute. Somehow Honda has persuaded me that Earth’s fate is in my hands.

And I am doing far better than most people. Those ads that tout 24 mpg for the latest cross-over?  I scoff. I’m pushing 45, Bub. At these rates I don’t have to drive an over-priced  hybrid, with its battery like a time bomb, dirty to make, impossible to recycle. And I’ve plenty of techniques in reserve if guilt gets worse.

Not only that, but my 12,000 miles a year are justified, for I’m escaping to Maine twice a month to volunteer for a land trust, and that means saving land and sequestering carbon if nothing else. And if everyone were as conscientious, committed, and careful as I (so goes the liberal plaint), wow, we could save the planet.

Ridiculous, of course. What one person does means almost nothing. It’s already too late. These words I write could lighten a thousand lead feet and make a difference but vanishingly small. ECON is an atom in a slowly exploding mushroom cloud. That traffic jam on Route 128, going nowhere but still burning, is repeated a thousand times a day across the world. Think about a cruise ship: the average trip from Boston to Bermuda consumes a quarter million gallons of fuel, advancing 30 feet for each gallon burned.

Am I not much better than all that? Yet I obsess. Western life is a long series of compromises and conundrums: boycotting Walmart means fabric workers in Bangladesh lose their jobs; a brand-new efficient house may never save enough energy to overcome the amount needed to build it in the first place; nearly every bite of our food reeks of the carbon exhaust of combines, semis, and jets; every soft comfort has a hard cost; just driving a car is an abomination. I can’t (or won’t) do the right thing and live hermit-like in Maine. Why bother?

Yet I obsess. I note ECON’s every tenth of change, seeing visions of that trip on the flat, hot highways of the Midwest last year when we nearly topped the magic mountain of 50 mpg. But in the hilly East we fail. Our consumption gallops.

No wonder I worry. The news is full of the wonders of natural gas, so incredibly abundant as shale gas under the land and methane ice under the coasts that it may be a larger resource than all other carbon fuels combined. Fantastic? No – we’ll burn it all.

So I obsess on ECON. Only two icons show on the systems part of the dashboard, and one of those winks out when the engine warms up. Until disaster actually happens, all those other indicators of doom – brake warnings and shift malfunctions and systems failure and engine overheating – stay invisible, deferring to the one constant green, creepy half-tree, half-human thing that’s lit when ECON is on. Let’s just drive along as the planet gets sick and overheats, just be green and everything will be OK.

And yet I scan ECON’s gauges, every few seconds. Of course, I could turn Average Fuel off. But I won’t. I need to know I’m trying as best I can. I need to be forced to know I’m making a difference, however minuscule. I need to know that whatever I do is almost completely inconsequential to the world, yet still matters in some way. I need to be better than average, at least in a car, spending our planet’s inheritance.

I’m not released until the car is turned off (Tip #72, Turn key off, then shift to Park). Whew. I can relax again. Other demons of consumption don’t pester quite so insistently.