The best way to remember what you forgot to bring to a race is to wake up super early, stop for coffee, head down the freeway, get to the race site, park your car, take a shuttle to the start, stand in a line to use a Porta-Potty, then remember that you meant to bring some gloves.

Little things seem important when you’re nervous, and I am. I look around. The trail runners are a pretty friendly crowd—their socks get a little dirtier than the regular road runners, and they aren’t as obsessive as the triathletes so I don’t need to be afraid of them. What I’m afraid of is the course: it’s brutal, and that’s why there aren’t more people here. Last year it took me three hours and fifteen minutes to run fourteen miles. I remember it was colder last year and I was carrying Kleenex; I must have had a cold.

It’s time to shed the layers I did manage to wear, and I rummage through my bag as if its proper organization will have something to do with my performance. As I look up I see Shawn, the guy I dated last year. He’s not looking at me, but I feel as if he’s seen me. A balding blond, he’s lanky and well-suited for this environment made for an antelope. 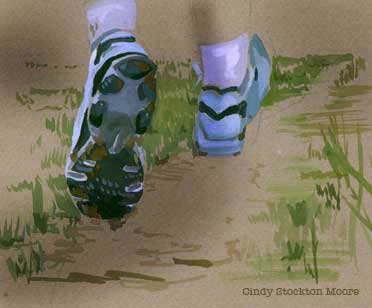 The start is up an incline and he’s just finished warming up. He exhales and shakes his head a little. He’s wearing a race kit that looks slick: a tank and short shorts. He’s decked out in clothing furnished by “Triathlon Lab,” the shop where he works. He manages the store and gets the stuff for free. I’m wearing some long baggy shorts plus a fuel belt that helps to carry four little bottles around my waist so I can stay hydrated. Shawn “bandited” a race (raced without paying the entry fee) over the summer when we were dating, so I’m glad to see him wearing a race number. He’d said he felt bad taking any water from the aid stations at that race. I’d always thought he was cheap, or maybe just broke, when he pocketed a ten I laid down for a tip one time when we went to happy hour at the Border Grill.

The gun goes off. A stampede of 400 runners jockey for position as we settle into our paces on a dirt road that’s downhill into a basin. I refuse to run behind someone who’s wearing an ipod, so I go around the guy in front of me. It’s a race, for Pete’s sake! What a rookie.

The first aid station marks the turnoff onto the trail and a pack of us hit the ground hard, our feet beat-beat-beating the single track hugged by a field. Oh no! A traffic jam, the guy out in front can’t handle the pace, there’s no room to pass. When he finally steps to the side, a dozen of us run through to the jagged ascent: twists and turns, big boulders, and steep-steep. I can hear my breathing. The young co-eds around me are fading,dropping back to a walk.

This is why I train. Unlike Shawn, I was not born a runner. He barely trained but was a track star back in high school, his dad had told me when we went to dinner once. I’d been working on my running for seven years and I’d made some fitness gains, but I still wasn’t at all fast.

My legs feel the load of climbing, but they are strong and fresh. I spring and bound up at a slow pace, though now my breathing is audible to other people. I come up behind a tan girl who’s got a Los Gatos Ultrarunners shirt on. She’s got the right kind of legs—some muscle but not a lot of mass. I fall in behind her.

“Let me know if you want to pass,” she says. I don’t respond.

They say run your own race and that’s what I intend to do, but this guy behind me is breathing hard, and he’s right on my tail. It’s annoying.

“Why… don’t… you… pass?” My words are broken with my breath.

“No, I’m fine,” he says. He keeps on my tail, huffing and puffing, emphasizing the exhale like he’s an exhaust pipe. His cell phone rings. That’s the end of him!

I hammer my quads on the descent, flying downhill, barely taking time to put my feet down. Another aid station. I run through trees, a riverbed. I take the climb as steadily as I can. I see an upside-down horseshoe emblem on the lower left leg of the girl in front of me. She’s slowing.

“Come on Lululemon pants, pick it up!” I say. Her knees spark. “You’re doin’ great!”

Yeah! We’re awesome! My arms brush my sides, and I duck under a branch.

Finally, a clearing. The ground is dry below the sign that says Boney Mountain, and I run on its spine. One side ocean—the surf white, foamy, and smooth from this far away; the other side is snow on distant mountains. I’m somewhere behind Malibu and there was a lot of rain this year, so everything is green in the sulcus below me. I take a long, deep, slow breath, use my finger as a mini-windshield wiper to wipe each brow. Whew! I bask in the warmth of the sun up here. But not for long.

A glance at my watch tells me the fast people are probably done by now. People like Shawn.

Rat tat tat tat, the descent is a roller coaster ride. Steep, I get passed by a big guy; he’s young, has the physique of a football player, and he’s got a ton of momentum on the downhill. A hard left now, I use my arms to help me turn. Da dit dit dit dit. The sounds of the rhythm of the downhill.

I don’t want this race to end. There are two miles left, and, of course, one more little bump to scale. The young, big guy who flew past me is walking now, hobbling, he’s semi-injured. His enthusiasm took him past the point his tendons could handle. My legs are getting tired—it’s been eleven hilly outrageous miles so far. I trip over a loose rock but don’t go down. It’s a narrow pass, and there’s a mini-traffic jam, people slowing on the uphill. I assume a prehistoric stance—something stooped, but forward-looking as I climb. I’m working, but I’m not laboring, so now the guy in front of me is in my way.

“Pick it up a little,” I say, as if I am his subconscious coach whispering in his ear. Then I think, don’t be so bossy and add, “If you can.” I see very little change in his pace or style after a few more steps.

“Can’t you see I tried to pick it up in my own way?” he says, stepping to the right.

I worked so hard to get over those hills, I’m not going to succumb to a lesser strategy now as I enter the paradox of the last two miles: I can’t wait for it to be over, but I want to it to last.

“Ahhhh, uhhhhhh,” the utterances come from a deep place. They are deep sighs, a heaving. I may be tired but I’m relaxed, and I am loud.

“Are you OK?” the next person I pass asks me.

I’m on an earth escalator and the steps are melting behind me. There’s less than a mile of flat land before the finish, and I shift my legs into an easier gear. Here comes that finish line. Good job! I tell myself smiling big, dancing around a little with my arms in the air under the banner.

The moments after are the best, so fresh and quiet as I walk over to the refreshment table. After I’ve had some water, I check the results, which are just posted. I have taken more than thirty minutes off last year’s time. Shawn finished in fourth place overall, second in his age group. We are the same age, but he is almost an hour faster than I am. It’s as if we ran different races. That was us, different races, different places. A hipster artist who worked in a bike shop with natural-born athleticism, he used expressions like you know the spot, hit you up, that’s how I roll. His mother had been an Olympic speed skater, and his father was a hard-core cyclist and runner. They’d divorced.

This race serves scrambles eggs after, and I grab a plate. We are standing around a grassy parking lot that has some tents with vendors. It’s not hot; it’s a beautiful and harmless day. The announcer says he’s going to start the awards ceremony. There’s Shawn again, over by the podium.

“How was your race?” he asks. We’re both sweaty, his is more dried.

“I’ve improved,” I look down at his paper plate, which has the remains of salt and pepper on it. We congratulate each other on our races.

“No,” he says in a relaxed enough way that I believe him.

“Where’d you get that salt and pepper?” It’s more of a demand than a question.

“They have it over there.” He gestures toward the egg table. I walk over to the now-empty steam table trays, help myself to a few shakes. Shawn gets called up to the podium to receive his award. I clap for him and give out a yell, “Yeah, Shawn!”

He looks right at me, maybe a little embarrassed.

That’s how I roll.