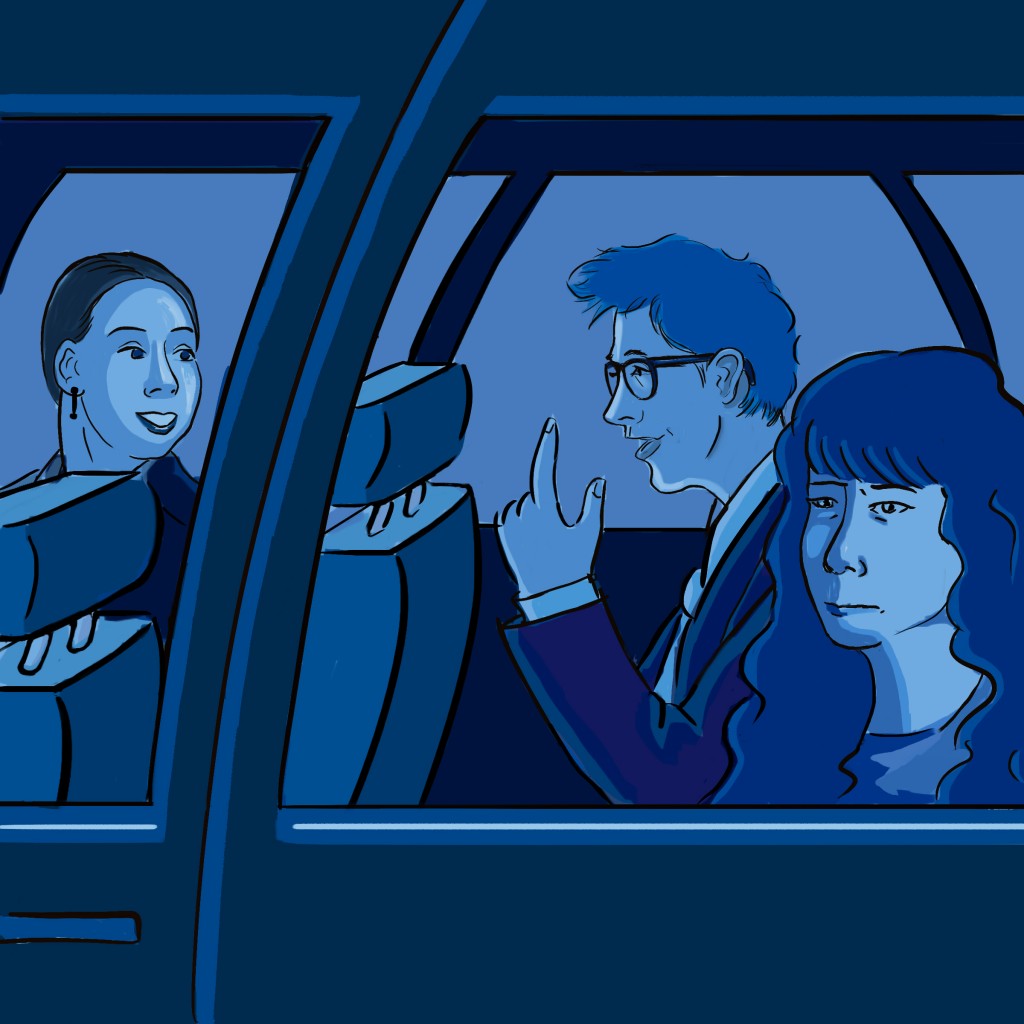 I set one foot inside the shiny black SUV and hoist myself up. I wish they had running boards; my legs are too short for me to climb in gracefully. I plop into an empty seat in the back, getting a vague impression of a clean-cut young man in the other seat. I glimpse a dark-haired woman in front. I’ve kept them all waiting a minute or two and brace myself for a comment, but there is no reproach. I give my name to the driver and we get moving.

A conversation resumes. “The truth is, I’m not really interested in that kind of job,” says the woman. She cranes around to talk to the guy next to me. I can see her profile: maybe early thirties, with elegant features and precise makeup.

“Why not?” says the man. I sneak a better look at him. Young, late twenties, not quite movie-star handsome. Maybe neurologist handsome.

“I couldn’t be somebody’s secretary. I’m too strong-willed,” she says. Humblebrag alert. “I would say, get your own damn coffee.”

He laughs. “Then what’s wrong with your job now?”

“I’m just...bored,” she says. I’ve been willfully deaf, not looking up, trying to play a game on my phone, but I can’t help getting interested.

She mentions a type of service-provider. Let’s call it an upscale dog-grooming spa. She gives the street but not the name of the business. “I mean, I’m a partner there, I’m not just an assistant. I couldn’t work where I didn’t have control.” The two keep talking. Apparently he’s a headhunter. They discuss jobs she can do and how he can help free her from her ennui. They exchange first names and he gives her his email address. It slips past me but I do a search on my phone for the place she works. In my defense, she isn’t the only one in the cab who is bored. I don’t find anything online; without her last name, I can’t narrow it down, even with the approximate location. This is Manhattan, so you can bet there are a lot of places people can go for pet-primping.

Ridesharing: one more way to overshare. It’s not news that it’s too easy to relax and digitally say more than the world is interested in knowing and way more than you should safely divulge. But I love this neat synthesis of new technology and bad old habits. Just download an app that lets you get where you are going for less money than a solo ride, and all you have to do is spend time in a comfortable vehicle with one or more other like-minded passengers. And if you want, you can pretend that you and another interesting person are not being overheard, and since you’ll never see any of us again, you can tell all your secrets. Isn’t that fun?

It reminds me of the Cone of Silence, from the late, lamented television show “Get Smart.” Agent Maxwell Smart would insist on discussing top-secret intelligence under an ungainly plastic dome in order not to be overheard. The joke was that it never worked – the spies couldn’t hear each other but anyone outside could hear everything.

We can’t choose not to hear, of course. It’s not as though people have the equivalent of eyelids on their ears, and covering one’s ears isn’t the solution: (1) it looks weird, and (2) if you’re trying to be fascinating, why can’t I listen? Here’s why. In a city with a lot of spaces where overhearing is not just possible but inevitable, there has to be a social compact: I ignore what you are saying to someone else, or at least refrain from acting on it, unless it’s going to make me a lot of money; you don’t over-burden me with your chatter.

The rideshare adds digital drama to eavesdropping. Remember when talking was safe? Even if a listener was so inclined, it wasn’t easy to assemble the puzzle of someone else’s life based on scattered clues carelessly dropped. Now we forget it’s easy to get ourselves in trouble the old-fashioned way as well. I guess it doesn’t occur to most people that random strangers sharing their space might use a little tech to cause a little pain. Anyway, who’s going around dropping their Social Security number or birthdate in public?

Probably no one. But creative bad guys don’t need sensitive information to cause trouble. Last year I lost a pair of eyeglasses (fell out of a pocket) and I put a lost-and-found on Craiglist. Someone texted me: I may have found what you are looking for – please see photograph. I clicked on the photo and couldn’t open it, so I sent it to my laptop, opened it and got malware on my computer, and had to spend some time scrubbing it out. (I felt better when I searched online and found dozens of complaints from people who’d gotten the same message from the same phone number after optimistically placing lost-and-founds. You don’t mind being a fool so much if you’re not the first.) So let’s take as a given that there are always people who derive a certain malign glee in making strangers feel uncomfortable, lose money, or worse. I think any real New Yorker assumes that at least one guy on your subway car is probably a violent crazy. What kind of elitist attitude makes anyone think that the crazy doesn’t do ride-shares? And it doesn’t have to be a crazy person. It can just be someone who’s a little bored with playing phone apps and looking out the window and starts to take too great an interest in what you are saying.

I wasn’t planning to misuse the information the woman was dribbling and – spoiler alert – I didn’t. I don’t take pleasure in making strangers suffer; I need to know you well before I do that. But the two of them kept talking, not concerned that I might want some quiet. I’m too well-bred to have shushed them, though I kept wondering: if I wanted to be bad, how hard would it be? So I kept listening.

“I think we need an assistant at our firm,” says the man.

“What kind of responsibilities would that involve?”

“It’s for someone who sits out front, greets people.”

“But it’s actually much more than that,” he adds, fast. “It requires independent thinking and decision making.” He gives more details. “Is that something you might be interested in?”

She has perked up. “Actually, yes. That does sound interesting.”

She tells him about other jobs she’s had. She was an actress, she says. “You know, I don’t just do grooming where I work. What I really do is sales.”

Even I am impressed.

“That’s amazing,” he says. “Did you ever consider real estate?”

“Did you ever think of getting your broker’s license?” he says.

“Well, that’s the thing,” she says. “I feel like there’s a lot I can do. But I’m trying to figure it out now.” Maybe he had some ideas. “I never got to finish college so I just didn’t get on track when I was younger.”

“Yes, I left school after I met my husband.”

A very loud silence hits the cab. I shoot a look at the driver; he is staring straight ahead, straining not to be a part of this.

She gives her husband’s first name. “He’s a producer,” she says, proud of it.

“Nothing you ever heard of,” she says. She mentions a few movies. I have even heard of one of them. I do a quick phone search and find the name of the producer. Now I have a last name for the husband. I search his full name and her first name and get her last name. She hasn’t changed it, or at least it isn’t the same as her husband’s.

“Wow, of course I know those movies,” the man says.

“Really?” she says, clearly delighted. “I was in a couple of them. But they cut my lines.”

I keep tapping at my phone. She’s telling the truth: she’s had tiny roles. I use her full name to find the place where she works. I consider whether her partners would be interested in knowing she is dead bored and telling strangers in rideshare cabs that she’d abandon her partners at the first good offer. But I told you: this Sherlockian exercise was for demonstration purposes only.

“When was this?” he says. I admire his perseverance.

“Oh, I was in my twenties. It was amazing, I met him and he took my life in a new direction,” she says. She pauses. “You know, I’m thirty-five now.”

“Get out of here,” he says. Cute and gallant.

There’s a ping up front. I glance up and check the screen affixed to the dashboard: it’s someone’s stop.

The woman starts gathering her things. The car slows. She says goodbye to the man and self-consciously gets out, her descent infinitely more fluid than my lumbering ascent earlier. I get my first good look at her. She does look young, though not “get out of here” young.

The man is dropped off a few blocks later. Then it’s just the driver and me.

Someone has to break the silence.

“How do people tell everything to strangers?” I say.

The driver grins. “Oh, you should have seen it before you got in. It was really smooth. They kept talking and talking.”

“Really?” Sorry I missed it.

“She got in first, and then he got in. And then they were talking. So he tells her she should move to the back seat so it’s easier to talk.”

Good for her. “It seemed to me that when she mentioned her husband, it was all over.”

The cab driver guffaws. “Exactly. When she said she was married, he backed off so fast. I think he figured, ‘I’m not getting messed up in this, I don’t want this guy to come after me.’”

We both laugh. We get to talking about the long hours he has. Then he tells me he has crushing back pain from doing some yard work; he’s going for surgery the next day. He tells me how many hours it will take, and what hospital he’s going to, and the name of his surgeon.

I don’t remember any of that stuff, though. It’s none of my business.

Ruth is a lawyer and writer who lives in New York with her husband and children. Her essays have been published in Talking Writing, aish.com, and Alimentum, among other publications.

Laura Zinn Fromm
This was wonderful! So funny, so nicely observed and so painfully true. Nice piece!