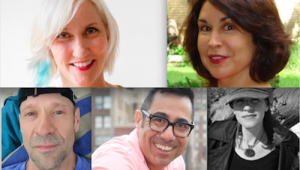 An Evening of Memoir

This evening will feature readings from 5 memoirists–including and hosted by Ducts‘ very own memoirs editor and author of Hello American Lady Creature: What I Learned as a Woman Living in Qatar, Lisa L. Kirchner. Here are your readers:

NANCY HIGHTOWER received a PhD in English/Creative Writing from the University of Denver, and has published sections of her memoir in progress about growing up in the evangelical south in Entropy, Vol. 1 Brooklyn, Cleaver, and The Chaos, as well as articles about religion and politics on HuffPost. She is the author of Elementary Rising and The Acolyte, and teaches at Hunter College.

DORRI OLDS is an award-winning writer whose work has appeared in book anthologies, newspapers and magazines including The New York Times, Marie Claire, Woman’s Day and The Forward. Her social media following includes over a million views on YouTube. As a full-time freelancer she divides her time between writing personal essays, pop culture articles, movie reviews and interviewing A-List celebrities. She is currently working on a book about misogyny and rape culture.

CHARLES SANCHEZ is an openly gay, openly HIV+ writer and performer. He is the creator of the award-winning HIV+ musical comedy web series, Merce, and a Contributing Editor for the comprehensive HIV website, TheBody.com. Charles would also like you to know that his hair is done by Justin at Hello Beautiful Salon in Brooklyn.

DEAN WRZESZCZ is an actor, writer, and editor whose op-eds have appeared in The Philadelphia Inquirer, Pittsburgh Post-Gazette, and New York Daily News. He also spends an inordinate amount of his life answering the question, “How do you pronounce that?”

LISA L. KIRCHNER is the author of the critically-acclaimed Hello American Lady Creature: What I Learned as a Woman in Qatar. Her work has appeared in book anthologies, as well as numerous magazines and newspapers. Once, she was simultaneously the dating columnist for an alternative newsweekly, bridal editor for a society rag and the religion reporter for a gay and lesbian paper. She’s currently the Memoirs editor for Ducts, which is bringing you this evening. More at www.LisaLKirchner.com

More from Author
Comments on “Dec Trumpet Fiction: Memoir”
No comments yet. Be the first!