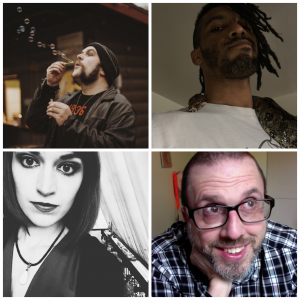 Our 20th season continues with the first reading of 2019. Hosted by Ducts editor in chief, Mary Cool, the night will feature spec fiction from Chelsea Graham, Dave K, Justin Sanders, and Michael B. Tager. Here are your readers:
CHELSEA GRAHAM grew up in Michigan, lived a decade in Rome, and recently moved to Brooklyn. Chelsea’s fiction has been published in Litro, the Stockholm Review of Literature, and Five on the Fifth. She holds an MSc in Sociology from the London School of Economics and a BA in Communication from the American University of Rome.

DAVE K is the author of The Bong-Ripping Brides of Count Drogado. His work has appeared in Front Porch Journal, Cobalt, The Avenue, Queen Mob’s Tea House, [PANK], X-R-A-Y, Barrelhouse, and on the LED billboard in Baltimore’s Station North Arts District. He is also a turntable placed on a table or countertop to aid in distributing food. Learn more at okaydavek.com

JUSTIN SANDERS is a ghost from Baltimore. His words have appeared most recently in American Short Fiction and on the city’s walls.

MICHAEL B. TAGER is a Baltimore-based writer and editor. He is the Managing Editor of Mason Jar Press, an independent publisher of high-quality books. Recent publications include Necessary Fiction, Hobart, Barrelhouse, and The Collagist, among others. He lives with his wife and cats, and thinks the Oxford Comma is for suckers. Find more of his work at Michaelbtager.com.

More from Author
1 comment on “Jan Trumpet Fiction: Spec Fiction Night”
New York! I’ll be inside you!; January, 2019 | Michael B. Tager
[…] be in New York on 1/12 reading at KGB Bar for Trumpet Fiction. If you’re in the area, come see me. I’ll read a little bit of poetry and then some […]