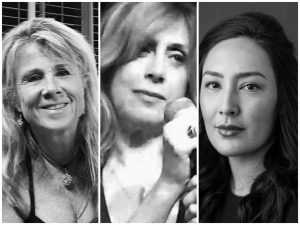 Join us for a nonfiction-esque evening that will feature a combo of personal essay writing and fictionalized memoir, featuring 3 talented authors:

Jenifer Margaret Kelly is a playwright who was born in Brooklyn but grew up mainly in Miami. Her play My Brooklyn was a finalist in this summer’s Eugene O’Neill Playwright’s Conference at Yale, and she is very involved with the Irish American Artists and Writers community in New York City. She is also the author of many creative nonfiction essays, poems, and short stories, and is currently working on a young adult novel entitled The Girl with the Red Umbrella. She attended UCLA film school and has an MFA in dramatic writing. Moving to New York City a few days before Super Storm Sandy, which she swears was a coincidence, she has nevertheless been in a whirlwind of one type or another ever since.

Roberta Lawrence is a singer/songwriter whose songs one day spontaneously expanded into short stories and novels. She will be reading from A Princess Comes to Chelsea—the prologue from her novel-in-progress, Quietly Crazy for You, which is inspired by years spent in the alternate universe of jazz and studio musicians in the late 1970s and 1980s. Roberta has received a New Voices Award from the Writer’s Voice for Princess, a Ludwig Vogelstein Fiction grant, and multiple artist residencies at Ragdale and the Virginia Center for the Creative Arts. Her articles and reviews have appeared in BOMB, Musician, ASCAP in Action, Backstage, and other publications. She helms her own public relations firms, Roberta Lawrence Media and Soundcheck PR, and is a singer/songwriter, lyricist, and record producer. The CD that she produced featuring her late husband, trumpeter/composer Mike Lawrence, Nightwind, topped the Billboard charts and is due to be re-released later this year.

Darley Stewart is a Scottish-Korean fiction writer based in Bedford-Stuyvesant, Brooklyn. Her work has appeared in Tin House, Funhouse Magazine, The Ocean State Review, Flapperhouse, The Brooklyn Rail, Battersea Review, Electric Literature, and elsewhere. She is the recipient of a 2016 Fiction International Fellowship from Seoul Art Space and a 2015 Ocean State Fiction Scholarship from The University of Rhode Island. An alumnus of Brandeis University and The University of Edinburgh, she gives regular readings in Brooklyn, most recently at the Manhattanville Reading Series at Unnameable Books.

More from Author
Comments on “May 13 Trumpet Fiction Reading”
No comments yet. Be the first!