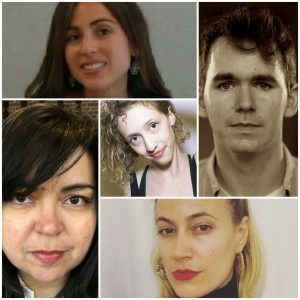 This multi-genre evening, hosted by Ducts’ essays editor, Voichita Nachescu, will feature an array of performances by memoir, essay, and fiction writers, including Zaina Arafat, Lilly Dancyger, Tim Manley, and Nina St. Pierre! Here is more information about your readers:
ZAINA ARAFAT’s stories and essays have appeared in The New York Times, Granta, Virginia Quarterly Review, Iowa Review, The Atlantic, The Washington Post, BuzzFeed, VICE, and NPR, among others. She holds an M.F.A. from Iowa and an M.A. from Columbia. She grew up between D.C. and the Middle East and now lives in Brooklyn, where she is working on a novel and a collection.
LILLY DANCYGER is the Deputy Editor of Narratively, where she oversees the memoir section. Her writing has appeared in The Washington Post, The Guardian, Rolling Stone, Playboy, and the revised edition of Without A Net: The Female Experience of Growing up Working Class from Seal Press, which was just published this week! She’s working on a memoir about her father’s art and addiction, from which she’ll be reading tonight.
TIM MANLEY is the co-creator and writer of the web series The Feels, which has been covered by Teen Vogue, BBC World Service, and Salon, among others. He is the writer and illustrator of Alice in Tumblr-land, and his true stories have been featured on The Moth Radio Hour and elsewhere. He is also the storytelling coach for the New York City DOE’s Showcase Schools program.
VOICHITA NACHESCU is a Romanian-American writer. Under the pen name Ileana Florian, her essays and short stories have appeared in The Atticus Review, The Rumpus, PANK, Mulberry Fork Review, and elsewhere. She is the essays editor of ducts.org and currently working on a memoir about growing up in socialist Romania.
NINA ST. PIERRE is a writer and editor with an MFA in creative nonfiction from Rutgers. Her writing has been published in GOOD, Flaunt, Bitch, Curve, and The Oregonian, among others. She’s currently working on a memoir about Northern California and her family’s relationship to fire. ninalary.com
About the Author
Trumpet Fiction
Share:

More from Author
Comments on “Feb Trumpet Fiction: Multi-genre”
No comments yet. Be the first!