Trumpet Fiction kicks off its 20th season in conjunction with San Fedele Press:

Our History, Our Words

An Evening of Historical Fiction, Nonfiction, and Poetry 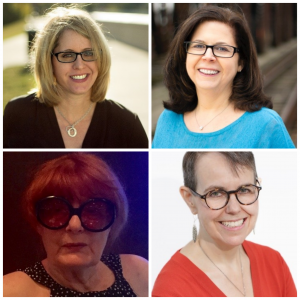 That’s right–TF will turn 20 years old officially in April 2019, but the kickoff of our new season begins on October 13, with D. Ferrara of San Fedele Press hosting. Experience one of the longest-running reading series in NYC and listen to historical writing from 4 authors you’ll want to get to know better:

DAWN LEAS is the author of Take Something When You Go  and I Know When to Keep Quiet. Her work has appeared in Literary Mama, San Pedro River Review, The Pedestal Magazine, SWWIM, Southern Florida Poetry Journal, and elsewhere. Her work won an honorable mention in the 2005 Dorothy Sargent Rosenberg Poetry Prize and has been nominated for a Pushcart Prize. In past lives she has been a copywriter, independent-school admissions director, English teacher, stay-at-home mom and worked in higher-ed administration. Currently, she is a freelance writer, editor and writing coach. She also received an M.F.A. in Creative Writing from Wilkes University. For more information, please visit thehammockwriter.com, facebook.com/dawnleas/ or instagram.com/thehammockwriter/, and find her on Twitter @DawnLeas.

DEIRDRE SINNOTT grew up in Utica, NY, where her upcoming novel, The Third Mrs. Galway, is set. She graduated from Syracuse University and speaks nationally about Utica’s role in the abolition of slavery. She directed two award-winning documentaries on social justice and mass incarceration/prison issues. Her writing has appeared in various magazines and websites.

BARBARA J. TAYLOR: After thirty-one and a half years of public school teaching, Taylor retired in June to write fulltime. She was born and raised in Scranton, PA, the setting for both of her novels, and has an MFA from Wilkes University. Publishers Weekly named her debut novel, Sing in the Morning, Cry at Night, a Best Book of Summer 2014. The stand-alone sequel, All Waiting Is Long, picks up sixteen years later. Taylor is working on the final book in the trilogy.  For further information visit her on Facebook, at barbarajtaylor.com, or on Twitter @BarbaraJTaylor.

THEASA TUOHY, novelist, journalist and playwright, has worked for five daily newspapers and the Associated Press. She has happily turned her life experience and reporting skills to fiction featuring female reporters. Flying Jenny is her second novel. Her first, The Five O’Clock Follies, was about a female correspondent during the Vietnam War.  As a playwright, Theasa co-authored the book, or libretto, of Scandalous: The Musical, an award-winning show about the life of D. H. Lawrence. She is currently working on a mystery series set in Paris. She is a graduate of the University of California at Berkeley, and lives in Manhattan.

More from Author
Comments on “Trumpet Fiction kicks off 20th season!”
No comments yet. Be the first!