Shoulders hunched over, hands in coat pockets, he strode down the street on autopilot towards his favourite pub.

All around him, the sky purpled into darkness, the full moon rose, the street lights faded up, taxis honked in the evening rush hour, shoppers popped in and out of stores to buy last-minute dinner ingredients, local louts gathered at the corner kebab.

Yet, he could only focus on the constant replay of the day’s events in his mind: negotiating for bank loans, bargaining with landlords, interviewing prospective employees, haggling for discounts on new stock…

Everything was too much. He was wound up. He could feel the tension in his shoulders and neck, between his shoulder blades and his eyebrows. A drink, several drinks, some time alone, perhaps some R&B playing in the background, some space to chill, and then who knows… That was what he craved.

He entered the pub. It seemed empty. He was relieved that he could have the place to himself before the peak hour crowd arrived. ‘The usual,’ he motioned to the bar tender. He picked up his pint, took a gulp and carried the cold glass with him as he walked to the juke box, hoping to play some R. Kelly.

There was a sign on the machine: ‘Under maintenance’.

‘Fucking hell,’ he muttered beneath his breath, wanting to throw his beer, glass and all, at the damn contraption.

He cringed when he heard that all-too familiar wheezy voice behind him. ‘Shit,’ he thought, ‘this isn’t my day, is it?’ On any other evening, he would have been happy to go over and chat for a few minutes with old William who visited the pub daily seeking whatever company he could find. But today, he was in no mood to humour the ancient pensioner. Reluctantly, he composed his face into a smile, turned and waved to William seated at the corner table.

It seemed rude to refuse the elderly man. So he dragged his feet towards the table, grudgingly preparing himself for an earful of stories about the war years and how life was so much better in days gone by.

Then, the overhead TV squawked to life with a re-run of yesterday’s Chelsea-Bolton game that he had missed. William seemed keen to watch the game too and stopped talking to focus on the flickering screen. Saved from William’s chatter, he tried to lose himself in the game and forget everything else.

He had heard that Chelsea had played badly. Nevertheless he wasn’t prepared to actually see how systematically Bolton had mauled Chelsea’s defences and offense. He stayed for as long as he could, downing several pints to drown out his favourite club’s dismal play. But he could not stay to watch the end of the game. It was too painful. He paid his tab, yelled goodbye to old William, and walked out of the now crowded and noisy pub. 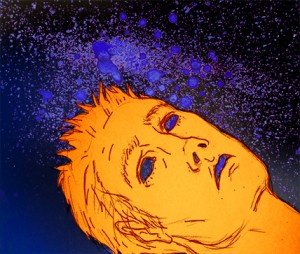 Outside, the night chill hit him fast. He hunched against the cold, increasing the tension in his body. So much for a relaxing night at the pub. He was now even more wound up than before he had entered the place. He felt like a drawn bow, ready to explode. Although the logical choice would be to go home and to bed since the hour was late, his body seemed to think otherwise.

Finally, he walked that tension out of his body. As he stopped to catch his breath, he realised he did not know where he was. He had walked so far out of town that he had long left all the buildings and street lamps far behind. He found himself alone in the middle of a dark country lane. It seemed that he had unconsciously used the light of the now-setting full moon to help him navigate to where he was.

He was bone weary. He looked for a place to rest. In the field next to the lane, he saw a knoll with a single tree growing on top. Carefully, he strode through the field and sat on the slope by the tree. Breathing in deeply the fresh night air, he lay back against the grass and gazed at the heavens. It had been a long time since he had last done this, looking up at the night and far away from all manmade structures that could frame the natural universe.

With each breath, the last vestiges of tension melted away from his body into the ground and his body grew lighter and lighter. He reached his hands out to touch the stars and felt the stars enfold him within their embrace. He took in the deep blackness of the sky, slowly losing himself within a greater entity. All his troubles seemed like nothing within the vastness of space and they vanished.

He did not sleep. Instead, he rested in this suspension of time and space. So when dawn crept into the eastern sky, breaking the illusion of night, he was ready for the new day.