In the Time of the Byzantine Empire
Kim Addonizio | Fiction | Issue 33: Summer 2014
Share:

Her ex-husband had been in a terrible accident.  Biking alone in the Hudson Valley, he had lost control on a downhill and crashed into a tree, breaking several ribs and his scapula.  He’d been wearing a helmet, but had sustained a brain injury.  Now their son had flown up from DC to New York to be with him; his present wife was constantly by his side, through the ICU and emergency surgery, through the hospital stay and then the move to a rehab facility where he was learning, slowly, to identify photographs of animals and the names of the people who surrounded him.  There were a lot of people; he was a popular language professor, regarded as a leading translator of contemporary Slavic verse.  One of his books was widely used as a textbook. He had a stream of visitors when he was able to have them, and many offers of support from students, colleagues, and friends.

The ex-wife knew this from the blog a teaching assistant had set up on a web site called Caring Heart.  She was in Italy, on sabbatical, working on an architectural book about Ravenna. She had been spending her time thinking about sepulchers made of porphyry and the fates of Byzantine monarchs, watching the light reflect off the gold haloes of martyred saints walking in a bright mosaic procession toward Jesus and Mary and the angels.  Her thoughts had been centered on churches and basilicas, and on a restaurant where she often ate and where she drank, most evenings, a Campari spritz followed by a carafe of red wine.  She would go home to the apartment she rented, not far from where Byron had once lived with Teresa Guicciolo.  There she would have more wine, enough to allow her to pass into a restless sleep before waking in the middle of the night, sweating from a hot flash.  She would read for an hour or so, and then, if she couldn’t get back to sleep, would tap out a Xanax, swallow half with a glass of acqua minerale, and thereby lose another morning of work. 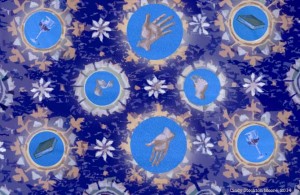 Now she spent those late moments of the night on Caring Heart, reading about her former husband.   The entries were written by his assistant and a close colleague, and sometimes by his wife.  He was agitated, and had pulled out all the tubing and tried to rise from bed; he was calm and serene and loving, or angry and sarcastic.  He called his son by his dead brother’s name, and pulled the covers over his head and refused to eat, or struggled forward with a walker, making it halfway down the hall. There were loving messages from everyone he knew; the ex-wife, herself, had written a couple of them: Wishing you a fast recovery. Thinking of you all during this difficult time.

What she felt, but did not write, was that she was jealous. It was a dark, self-pitying jealousy, and it moved like a black wave over all the images that passed through her mind, leaving behind its bitter salt.

Their son had once been angry with his father, in his late adolescence, but that had long passed, and for the past several years they had enjoyed a close relationship.  Her own relationship with her son had gone from an easy intimacy (he had been hers alone as a baby and toddler, while her husband was busy with teaching) to a distant politeness that frustrated her, and that she did not understand.  Her son treated her as a casual acquaintance, one he did not particularly want to know further; he rarely called or wrote.  While she, as always with her emotions, was overwhelmed by their ferocity and did her best to tamp them down to an acceptable level.  Otherwise, she noticed, people tended to edge away from her,as though a glass had just shattered at their feet.  Now her son was closer to his father than ever.  The entries on the web site often mentioned the word family, the family being, of course, her ex-husband, their son, and the wife of the past ten years.  The three of them were like a beautiful painting or fresco, perfectly proportioned, luminous with religious meaning.  Mary flanked by two hovering angels, or holding her veil playfully above an infant Jesus while Joseph stood meditatively in the background. The hand of God, the suffering Christ, and the white dove.  Whereas she, the ex, was one. An aberration.  She was a drunken apostate.

Her former husband was a good man, and she had screwed up the marriage. The last year they were together, she had begun an affair with one of his graduate students.  She had lied about where she went, invented a friend named Veronica who often needed her, had come home from fucking her lover all afternoon straight into the shower and then to the living room to greet her husband.  She could not remember, now, why she had done these things.  There had been a vague but persistent dissatisfaction, a longing for—but she never knew what.  She had finally told him about the affair; her lover had left her, she was (she thought) miserably in love, she might (she also thought) get back together with her lover, without the obstacle of the marriage.  Their son was twelve at the time.  She had screwed up her relationship with him, too, and for what?  Afterwards there had been a handful of men, including one who was married, who had at one time promised to leave his wife, who did not leave, and she found herself alone.

In Ravenna, there were bicycles everywhere, and no one wore a helmet.  Every day, she was reminded of her ex-husband.  It was unclear how many of his abilities he might regain after the insult to his brain. Everyone was trying to be upbeat and hopeful.   The doctors had said that full recovery was unlikely. She remembered what a kind, fair man he had been; even after he knew about the infidelity, and the marriage was over, he had shared care of their son and been generous in terms of finances.  It hurt her to think that now he would be reduced; he might not be able to return to teaching, or even care for himself.

Today, she learned from his wife’s entry on Caring Heart, he was going to be forced to leave the rehab facility. Their insurance would not pay for him to stay longer.  He would need round-the-clock care for an indefinite amount of time. People were volunteering to run errands, offering money and places to stay. The wife wrote that sometimes it was all too much for her.  I want him back the way he was, she wrote.  The ex-wife felt incredibly mean of spirit, but there it was, that thick, viscous surge of feeling: she still envied the wife.  The wife who today was packing up his things, helping him out the glass doors, taking him home.  They would have a quiet dinner with her son, who was staying with them as long as he was needed.  He would sit with his iPad in the living room, near his father on the couch.  His father would have his stocking feet on the coffee table; maybe he would be trying to decipher a book, or simply be leaning back against the cushions, tired and drawn-looking; every now and then a small ripple of confusion would pass over his face, and then subside.  She did not want to be on the outside, feeling like a voyeur to his suffering.  She wanted to be, again, a part of what they had had together, what she had foolishly thrown away.

She read the wife’s journal entry at five am and could not get back to sleep, even with an entire Xanax.  She lay in the dark remembering the early years of her marriage.  She had slept beside her husband easily, insensibly, night after night, never waking.  In the mornings she would curl against his back, and he would reach behind and pull her arm around him. He would come home from his classes and drop a stack of books and papers on the dining room table, where he liked to work. They would cook dinner together, drinking wine he would have opened while telling her about the vintage or the origins of the wine, then pouring her a bit to taste before he filled their glasses.  Soon their son would be born, and she would cradle him in the crook of her arm as she stirred soup or risotto, or put him in his playpen, where he would lie looking up at a mobile of plush farm animals in his solemn way. Their young family—husband, wife, new son—had seemed inviolable, like a photograph or painting; in her memory it was still there, perfectly framed, glassed-in and inaccessible.

Around seven am she rose, exhausted, and walked down the street for a cappuccino and croissant at her usual café.  She went to another café on the Via di Roma for a second cappuccino and tried to read a monograph on medieval iconography, but mostly she sat, looking out the window, thinking about her former life.  It had been a good life.  She had destroyed it, and out of that her husband had built a new one.  She had built nothing.  After Ravenna she would go back to Boston to the small studio apartment she owned, where she lived with an ailing cat and a wall of shelves filled with books, where a folding futon doubled as bed and couch.  She put her elbows on the table and leaned over her cappuccino, letting her hair fall over her face so the other patrons would not see that she was crying.

A little later she crossed over to Sant’Apollinare Nuovo.  She always felt stirred by the glitter of the mosaics, the marble columns, the coffered ceiling and soffits of the arches. The basilica had been built at the beginning of the sixth century by an Ostragoth conqueror, Theodoric, as an Arian chapel for his palace.  Some of the mosaics at one end of the nave had once depicted the king and his court.  Fifty years later, when Theodoric was dead and Ravenna was under Byzantine rule, the church had been reconsecrated as a Catholic one, and the figures had been covered over with images of curtains.  What had been Theodoric on this throne was now a gold design. There was only one visible indication of the change that had occurred: a hand from one of the original figures had been left.   Slim and white, the hand came out of the darkness between two curtains and rested against a column, barely noticeable from below unless you knew it was there.

She gazed up at it until her neck hurt.  She began to imagine a very still, silent, somehow living figure hidden behind the bright tiles, breathing quietly—maybe a lady-in-waiting in a richly colored brocade gown.  The figure would feel the light coming through the arched windows on the east side of the nave, hot on her open palm and the cuff of her sleeve.  The rest of her would be achingly cold.  She would have stood there year after year, enduring her own erasure.  One day she might step forward and show herself.  She might drift down through the hushed air, past the startled tourists, and step lightly onto the marble floor. Then she would walk out into the open courtyard, where a palace had once been, and feel the sun on her face again.