Wally said Cliff started it.  Cliff said, no, Wally started it.  But under their mother’s new policy, it didn’t matter who started it.  If she was disturbed while on the phone, they were both to blame.

She wore square-tipped red loafers and slid one off the left foot and gripped it at the toe.

She said, “What did I tell you?” and started swinging.

The first blows glanced off Cliff’s arms, which he’d raised over his head.  The heel-box popped against his forearms like folded newspaper off the backside of a dog.

“But this time he really did it, Mom,” Cliff explained.

“What did I tell you?” she repeated, correcting the angle of her swing, testing overhand instead of sidearm blows, and now instead of the leather glancing off shirt sleeves the heel dug in to flesh.

It was the fifth one that caught Cliff’s elbow.  They both heard the crack.  For an instant they held each other’s eyes in silence waiting for what that crack meant, then Cliff erupted.

“This is his fourth cast in three years,” Dr. Holman said.  He wrapped wet white gauze around Cliff’s forearm, overlapping each swirl in a pattern that climbed gradually like color in a barber’s pole.  “What can you tell me about that?”

Cliff’s mother had been crying.  Now her face went from sorry to something else.

Mrs. Marinello, the nurse, fed the dry powdery gauze into the water tray where it soaked until Dr. Holman pulled it around Cliff’s arm.  He had already used an entire roll that had started drying around Cliff’s chest.  It felt like it was folding Cliff’s ribcage open like a book.

“I was wild, too,” Dr. Holman said, looking up over his glasses. His walls were lined with the heads of animals he’d shot on trips to Africa.  A gazelle, a lion, a buffalo.  “Still am, I guess.”  A polished case with spotless glass windows was stocked with gleaming rifles.  “Wild boys have strong bones.”

“You never had a cast?” Cliff’s mother said.

“Never had a cast,” Dr. Holman said, holding up his arms as evidence.  He wore a white shirt with short sleeves, a stethoscope tucked into the pocket.  His arms were hairy.  Wet white lines of plaster trickled down the wrists into the hair. 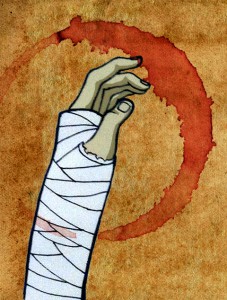 He said, “Wild boys cause trouble though, don’t they, Mrs. Foote?”

Cliff’s mother looked at him blankly.

Above the refrigerator a white box that resembled a birdhouse had a sign that read, “Lollipops for Good Boys and Girls.”  Cliff pictured what color he’d get this time.  Red.  Yellow.  Green.  He wondered if wild boys got lollipops, too.

“I don’t know what you’re saying,” she said.

“What I’m saying,” Dr. Holman said.  Then he stopped. The wet gauze was going over the elbow now.  “That hurt, slugger?”

Cliff shook his head no.

“Not really,” Cliff told him.

He arched his eyebrows, which were black and white over the black frames of his glasses.  “Well it hurts me.”

Cliff laughed.  Around his eyes felt crusty from crying.

“It hurts me enough I’m gonna need a lollipop,” he said. “That OK?”

“Can I have yellow?”

“And yellow for the slugger.”

Mrs. Marinello stood on a step-stool and pulled out the lollipops.  She peeled the wrapper off the yellow.

And she slid the lollipop onto Cliff’s tongue.

“What I’m saying, Mrs. Foote, is wild boys hate to see other wild boys get so many casts.”

“Put it this way,” he said.  The gauze began climbing Cliff’s biceps, where it felt cold and wet and funny.  “I haven’t articulated an overarching policy, I take it case by case.  And in this case, one more will be too many.”

He kept wrapping.  Inside the wet wrap, the gauze was tightening.  Cliff’s muscles felt bigger inside than they did in the air.

“Mrs. M,” he said, “you finish him up, all-righty?  And you,” he said, winking at Cliff, “no cello for a week.”  He opened the door to his office between examination rooms. “Mrs. Foote,” he said.

“What are we gonna tell your father about this?” Cliff’s mother asked him.

They were on the way home.  It had turned dark.  A driver in an oncoming car flashed his headlights to get Cliff’s mother to turn hers on.  She was sniffling into a crumpled tissue.  A light mist dotted the windshield.

“About your arm, how it happened.”

“We have to tell him it was an accident,” his mother said.

Cliff said, “That’s not the truth.”

Back home she stirred Bosco into a glass of milk and placed a box of Mallomars on the counter.  Cliff took the Bosco in his cast hand, which hung stiffly in front of his chest like a shelf.  He proceeded to his room.

“You’re not hungry?” his mother asked.

She followed Cliff into his room and closed the door.

“It was an accident that your elbow broke, Clifford, you know that, right?”

“Stop calling me Clifford,” he said.

“Cliff,” she said, correcting herself.  “But you know I didn’t mean to do that, right?”

“So can you forgive me?”

He sipped at the Bosco.  He studied the spines of the books he’d borrowed from the library.  How was he going to carry these now?  He pictured the days or weeks it would take to forgive her.  And during the time it took to forgive her, who else would he have?

“I’ll come back in a few minutes,” she said.

“It wasn’t even my fault,” he sputtered.  “You wouldn’t even listen.”

From the hallway, Wally shouted, “It wasn’t my fault.”

“You started it, you liar,” Cliff shouted.

Wally said, “You started it.”

Cliff’s mother said, “Walter, go to your room and close the door.”

Cliff’s mother flung open the door, and Wally stood his ground, without even flinching.

He said, “You’re in there trying to make up a story, aren’t you?”

“No, you watch it,” Wally said.  He leaned around her in the doorway.  “You tell the truth, Cliff, like they taught us.  See how she likes it.”

“Don’t push your luck,” she told him.

But Wally pushed it, and she didn’t push back.  He said he was telling the truth if nobody else was.  “That’s my policy.”

“It’s none of your business,” she told him.

Wally said, “That could have been me, and if it was you wouldn’t even care.”

Dinner was late, and it went by quietly, the television humming in the background.  Ozzie and Harriet, the Patty Duke Show.  Cliff stayed up later than he was allowed.  He and Wally watched Ben Casey. “Man, woman, birth, death, infinity.”  Cliff didn’t understand a word.  Wally couldn’t either, Cliff was certain, but he appeared to.  He had that 5th grade thing about him.

Ben Casey was their mother’s favorite show.  Ben Casey was a sensitive doctor.  He didn’t condescend to uneducated patients, and he looked like the Italian boys from her old neighborhood.  Ordinarily, she made sure Cliff and Wally were in bed before it started.  Tonight she didn’t watch.  She sat at the kitchen counter, smoking by the window.  Some of the smoke drifted out through the screen.  Some hung below the ceiling.  Cliff wondered if Ben Casey smoked.  He wondered if Ben Casey fixed broken elbows.  But this episode wasn’t about broken elbows.  It was about hospital policy, and how, in order to really help a patient, Ben Casey had to break hospital policy and make up his own.

Tim is co-founder of New York Writers Workshop, and co-author of its popular text, The Portable MFA in Creative Writing. His chapbook, Yolanda: An Oral History in Verse, is forthcoming from Finishing Line Press (2015). His fiction, poetry, and essays have been published in China (United Verses), the Philippines (Esquire, Tomas, Silliman Journal, and Fast Food Fiction on Anvil Press), and in numerous venues in the US, including The Blue Lyra Review, Barnstorm Literary Journal, Caribbean Vistas, Soundings Review, Theory in Action, and in the anthology Long Island Noir (Akashic Books). He’s been an invited speaker and workshop leader in China, Thailand, the Philippines, Australia, and the US. He teaches in New York University’s Global Liberal Studies program. As a former Ducts fiction editor, he’s been proud to showcase work from established US writers such as Kim Addonizio and Sheila Kohler, and to bring in writing from around the globe, from authors such as Damyanti Biswas, Sarge Lacuesta, and M.G. Stephens.

More from Author
Comments on “Policy”
No comments yet. Be the first!