The Grand Theory of Consciousness that Came to Nothing
Andrew Bond | Fiction | Issue 34: Winter 2015
Share:

They hired the Smartest Man in the World to come up with a unified theory of consciousness.

‘Find us the e=mc2 of the mind’, that was the brief. They gave him all the time and money he needed and off he went in search of the metaphysical holy grail: what makes us think.

First, a word about the Smartest Man in the World. How smart was he exactly? Well, by the age of 11 this mixed-race kid had finished a degree in social sciences at the same Ivy-League University where his parents were both lecturers. He was a child prodigy; the only offspring of a rocket scientist and professor of Eastern philosophy. At 15 the Smartest Kid in the World had obtained a doctorate in Philosophy. He was too young to be a professor, so he was sent off to study meditation with grand masters in Tibet. He became an expert in Pali and Sanskrit, studying the old vedas and mantras. Then he disappeared for a time into an ashram in Ladakh.

Finally, after more than two decades the Smartest Man in the World announced he had found the answer. And so they gathered in the great hall of the Royal Society of Thinkers. It was to be a seminal moment for mankind — the point at which humans finally and conclusively could determine the rationale of their existence. All the most important academics of the time were there, along with politicians, even the Prime Minister. So was the general public, up in the gallery, with their phones and tablets, recording the event for posterity sake. The room was packed with anticipation, the public had been primed for years and months, the TV crews were all focused on the stage and its white board. The networks had sold every second of commercial advertising. 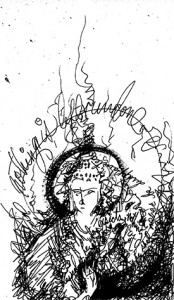 The Smartest Man in the World was duly introduced and in he walked, bowing to the crowd, smiling, waving for the cameras. For many, it was the first time they had seen the man they had heard so much about. Over the years the world had become increasingly aware that there was this genius out there working on a grand theory, and in recent months the media interest had become intense. But few had actually seen pictures of this reclusive man.

In strolled an uneccentric man, not yet old, but with unkempt hair and a beard, wearing an ill-fitting suit and no tie. His eyes were vaguely Asian, the cameras zoomed in on his face, they glowed with an intensity of thought.

He acknowledged the crowd without a word, then turned and began scribbling on the oversized white board. He started slowly, writing single words here and there on the vast empty space.

There were a few murmurs of agreement in the crowd. It seemed random but then he quickened. The board soon began to fill up.

The crowd offered a laugh, by now it was all so complex that no one could make head or tail of it. But still he continued to scribble furiously, pausing every now and then to check his thoughts, occasionally erasing something or moving it.

The marker squeaked. He was resorting now to tiny text; you could barely read what he was writing.

And then he stopped.

The Smartest Man in the World checked his work for about 30 seconds, nodding here and there, erasing an arrow with his palm, then he turned to the audience and smiled.

A short silence persisted. Someone started clapping. This set the whole audience off clapping, though not quite with thunderous applause. But while they were doing so, he turned back to the whiteboard and began erasing words. He wasn’t finished.

The applause petered out, there was a dull laugh from the crowd; a collective embarrassment of ignorance that swept through the vast hall. In the shadows of the gallery you could see people holding up their phones, photographing the moment as the mass of tangled words and arrows began to unclutter. Theories were seemingly blotted out at random. In due course, there were few words left on the board.

Then these disappeared one-by-one until all that was left, conveniently placed in the middle of the board, was a single phrase:

I think therefore I am.

He stopped briefly to let his audience reflect on this. ‘Descartes! I knew it!’ someone cried from the depths of the auditorium. Then he erased one of these words leaving:

Next to go was the last two words, so all that remained was:

Then he added a question mark at the end.

On quizzing this he drew a cross through ‘think’. This prompted him to erase ‘think’. It left him no choice to then take the eraser to ‘I’.

Nothing remained on the board. The crowd was stunned. They were silent, there was no clapping this time. The Smartest Man in the World nodded at his empty white board in affirmation, then turned to the crowded, beamed, and took a bow.

Still there was silence.

Someone in the gallery began to clap. They all started clapping, enthusiastically, until the whole house was brought down in appreciation of a brilliance that no one was quite sure of. Was this it then? Was this the Grand Theory of Consciousness they had been promised? In due course the President of the society cleared his throat at the podium.

“Sir, I think we understand your theory but could you please elaborate on your findings.”

For the first time, the Smartest Man in the World spoke. He stepped up to his microphone.

“Ah, yes. My conclusions reveal nothing.”

“Yes, sir, that is correct. Nothing.”

There was a nervous laugh of derision from the President.

“You have arrived at Nothing? After all these years, you have nothing to report?”

“No, I haven’t arrived at nothing. I mean, yes I’ve arrived at something.”

“My conclusion,” he paused here, unsure, “is nothing.”

Some among the crowd laughed. But the President didn’t.

“You said you had arrived at something.”

“And?” the President turned to the audience, arms akimbo.

“Well, you see . . .” the Smartest Man in the World became uncomfortable, fidgeting on his feet. It seemed he knew the answer but was having difficulty articulating himself. After a brief reflection he then said, “Well, nothing is something,” and grinned.

“Nothing is something?” The President looked over his bi-focals at the man below his podium. “Look, this is preposterous, sir, you are supposed to be the Smartest Man in the World! The weight of the world is on your shoulders. We have paid you considerable sums of money and given you aaall the time in the world.” The President was ruddy faced now, pausing to dab his forehead with a handkerchief. “We demand a proper answer!”

With that he thumped his fist on the podium. The Smartest Man in the World flinched with alarm, and the crowd grew silent with embarrassment.

[and in the control room the director was yelling “Cut to ads! Cut to ads!”]

“Well, after all the years of studying this and considering the many theories and considerations of consciousness, notwithstanding the fact that I had to give them some thought, I have determined that whether you think or not, it all leads to nothing.”

After a pause while he waited for the President to object further, he went on, “You see, the sum total of all this thinking that I did is the realisation that we shouldn’t be thinking after all.”

“And if we cease to think, then we cease to exist, and the result of that, of course, is nothing.”

“But that can’t be true, look around you, there are hundreds of people in this room. They exist, you can see them. And out there are millions more. That is not noth-ing?”

“Well, if you think about it . . .” The Smartest Man in the World left the sentence unfinished, and as it dawned on the crowd there were sniggers of laughter, a moment of realisation, murmurs and nods of agreement.

When the TV audience returned to the Royal Society, he was taking questions, doing his best to explain nothing at all to an audience that clearly didn’t quite understand. He hid his impatience well, respectfully answering questions.

“Yes, that is correct ma’am. The Buddha had it all figured out two and half millennia ago.”

To another: “All other species on this planet do not have the capacity of reason that we keep, so they are unaware of the question of consciousness.”

He then became cryptic, answering questions with quotes which the press would later ascribe to a variety of thinkers through the ages.

Discovering that one has nothing to say, one seeks a way to say that. (Susan Sontag)

Blessed is he who expects nothing for he shall never be disappointed. (Benjamin Franklin)

He looked in the direction of the president, apprehensively, then continued.

Nothing cannot become an object of study; you can’t do a PhD on nothing. (Eckhart Tolle)

To another, rather silly, question he even showed some rare wit.

I love talking about nothing; it’s the only thing I know anything about. (Oscar Wilde)

Eventually the crowd grew unruly, chatting among themselves, a light-hearted murmur. It seemed nobody actually cared that there wasn’t an answer after all. They weren’t thinking about it. Up in the gallery their attention span had moved on. They were now jabbing away at their phones and tablets, more interested in the re-tweets and reactions. In fact #Smartestman was no longer the number one trending topic, already replaced by #planetsgottalent.

But the President wasn’t done. He called the hall to order with a determined bang of his gavel. “Order! Order! I say.”

“This house proposes that nothing is gained from thinking,” he looked in the direction of the Smartest Man in the World, “Is that what you are suggesting, sir?”

The Smartest Man in the World stepped up to his microphone, “that is what I have discovered, yes.”

And the crowd in the gallery loved it. They roared with applause until the President was led away gibbering.