Jaine stepped from his building into early morning light, adjusted the tightly woven silk mask tighter over his mouth and nose, recoiled with his usual horror as he crushed the life from the quiet seething opulence beneath his heels, turned his face toward his right shoulder, stiffened against the cold and light rain, sought the warmth he knew and began to walk toward the park. Rainwater, standing in grey pools, in sunken places, in asphalt-covered concrete, awaited notice.

Sunday, surely some sun would shine, eventually. The rain was really no more than a mist – the Irish would call it a “soft day” – and the clouds were moving swiftly; spots of light moved along the ground as if someone overhead was rapidly sketching bright patterns onto the street with a large spot-light. He was confident that the new mask would provide him with the security, the sanctuary that he had sought for so long. The weave was represented to be impenetrable. No living thing could pass through this mask.

Janeta stepped from her building into early morning light, rechecked her purse, was comforted by glittering glass beads within, icy blue metal mirrors reflected her darting eyes; an unfamiliar odor drifted upward into her nostrils to tantalize her, and she spat a sharp, tiny and quick breath into air that felt liquid to her, air that seemed determined to clog her throat. She thought that it had always been so; she feared that it would always be so and she longed for a clear gulp of air that was not a watery drink, or a labored sigh, at least one. Only one. She did not see that as an extravagance. She was resolute that today would be different.

Her thoughts were occupied with the child she had abandoned. The first child. She would not abandon others. The man had asked her to and she obeyed for love. She obeyed like the distasteful other she often saw herself be. There was no good reason to abandon the child to his father and the guilt for doing so had pursued her throughout her life.

There was another child now twenty years later, born of a repulsive marriage and under extreme duress. She had almost died. Caesar scarred and marred for her eternity. She was filled with her goodness and retribution. Her penance could finally be paid. Not even love would take this one from her. She lived her life for him. Her heart beat for him and her blood flowed through her veins for him. Her being flowered because of his existence. The father had been duly disposed of and she was not concerned with him, she was now only concerned with the boy. He was now eight years old; the one she had abandoned for love was twenty-six years old.

Jaine longed to be alone.

Everyone should be able to be alone if he chooses to be, sung along his nerve endings. Guilt and responsibility for so much pounded in his heart.

The weave will hold. Absolved. Can do no more. They are so tiny. Rage courses along nerve fiber without restraint. Responsibility. Sense of cosmic ordination provides no respite. Must not, cannot be responsible. Responsibility is mine. The guilt has become unbearable. The Other tags along and is mindless of the dilemma. Her disdain for me and the masks hangs thick and fecund like an August river dawn. Perhaps there are other dilemmas. Always so concerned with her looks. Ceaseless scampering of little demons that never rest. They insert their tiny talons into the tender first layers of skin and gnaw at the nerve endings of my will. Must be rid of her. What does she think when she is alone in the darkness just before sleep? Her grotesque appearance cannot escape her notice. Surely.

Pale green chiffon would most certainly be acceptable to any who would pass by and notice. Most passing by usually noticed. Everyone always stared at her so intently, curiously. Slap, bang their inspection turned her heart to heat. Janeta did not think of herself as remarkable but others often did. This was her day and none would deny her; she was determined.

Jaine would not notice, he noticed only the care with which he stepped. Jaine, always Jaine. Immutable and remorseless. Pursued by him as if by a rabid animal, slathering and forever. The mirrors and glistening beads woven into my hair, tightly braided. Red leather sandals, with a slight heel, will be costume enough.

She could have been seen in the park in front of Westminster Cathedral, had there been anyone there to notice. It was a warm sunny day in London and several people were in the park. It was Sunday afternoon; the Cathedral would open its doors to visitors, which it did on Sunday at one o’clock.

A man entered the park. He saw a woman in a green dress sitting, combing her hair and putting on makeup. She was sitting on the grass with her legs under her and seemed to be applying a facial powder. She held a mirror high up and as far away from her face as she could reach. Her hair was dressed in an elaborate coiffure. It was tightly braided into several thin, long braids, with what appeared to be reflecting bits of glass or jewelry woven into each braid. Her hair was quite long and she continually brushed it from her face with her other hand. She held her face up to the sun, bathing it in the light. She would reach into a bag lying on the ground beside her and take from it, at different times, various paraphernalia with which to do her make up. She could not be seen clearly from a distance. 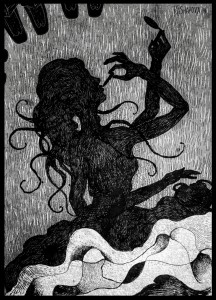 She kept applying makeup repeatedly. Perhaps she was doing something else, which he couldn’t see from a distance. He decided to walk across the park in a direction, which would carry him very near her. When he passed near enough to see her clearly he could see that she was a man and that she was not alone. Another person was seated very close to her; he seemed to hold her as a lover would hold her.

Sunday morning in the bright sunlight on green grass of a public and crowded park a young man dressed in woman’s clothing sat and made up his face again and again. All the life which had, at some point in space and time, occupied the exact spot where she now sat, gathered to tell of its passing into the heart of those passing by. All that had been seen and known and sought to caress and press itself to them melted and was adrift. The forlorn sound of all the aloneness, which had ever existed, was there and enfolding. What had appeared from a distance to be a woman sitting in the morning sun and drying her hair was instead a man who rouged his lips and face over and over.

The ritual was the same. She would dip the fingertips of one hand into a small round container, a woman’s compact that held the rouge. He would move his fingertips in quick, circular motions, nervously, and transfer a quantity of rouge from the compact to his fingers. She would then shake the braided and beaded hair from her face and hold her face up to the sun. He would then extend his arm holding the mirror which was the hinged other half of the compact so that it was between his face and the sun. She would continually shake the hair from her upward tilted face and smear rouge onto her cheeks with quick, staccato movements of her hand. He licked his fingertips with the same jerky movements two or three times and then would wipe his neck with the fingers he had cleaned with his tongue. She wiped her neck with the same hurried, frantic movements with which she did everything. When the procedure was concluded to his satisfaction he would put the compact into a small beaded purse, shake his hair, luxuriating in the warm sunlight and the sense of accomplishment, sit rigidly upright for a few seconds and begin the whole process again.

The ritual continued for hours. The visitor to the park watched her for hours; until Westminster opened its doors. When he returned to the park she had moved closer to the bench he had been sitting on while he was watching. There was then a crowd of young men gathered around her talking. He had seen them earlier trying to determine whether or not they were watching a woman. She was very demure for them; truly a coquette.

She reached into her beaded make-up bag, removed a metal container, poured the contents over herself, her hair and clothing, lit a match and tossed it into the green chiffon; the man who had been sitting quietly near her and who had appeared to be embracing her and wearing what appeared to be some sort of surgical mask was startled and made a movement as if to leave but did not; they were both engulfed in flame, the silk mask flared, charred into brown filament and wafted into the Sunday gentle breeze. Only then did it become clear that there were two of them, joined; connected from behind the shoulder to halfway down their shared ribcage.