Have you been injured in a car accident?

If the answer is “yes,” then you need a lawyer.  Why?  Well, for starters, the police officers who report car accidents are always—always—heavily bribed by one party to say that the accident was the fault of the other party.  This is a given.  This is 100% true.  How do I know?  Let me tell you.  I was a highway patrol officer in the state of California for seven years.  And not once—not one single time over the course of those seven long years—did I ever report an auto accident without taking a bribe.  Wake up, people.  This isn’t CHiPs.  This is the real world.  Cops take money.  Lots of it.  Every day.  So ask yourself: “Did I heavily bribe a police officer after my car accident?”  If the answer is “no,” then you need a lawyer.  A lawyer like me, who will stop at nothing to get you the money you deserve.

How do I know?  I worked for five years as an insurance investigator in the state of Alaska.  During those five years I committed moral transgressions that would turn most men into shame-ridden, suicidal wrecks.  I’m not saying my job caused me to down a quart of heavy-duty antifreeze in a seedy Barrow motel room.  Nor am I saying that my nude, unconscious body was discovered by an Inuit prostitute I’d called earlier in the day and forgotten about.  Or that the Inuit prostitute tied me to a dogsled and delivered me, nude, to an igloo on a windswept tundra where a geriatric shaman, also nude, nursed me back to health with strange, wailing incantations and a hallucinatory potion comprised of fermented berries and seal dung.  I’m not saying anything of the sort.  All I’m saying is that I did some dishonest things when I was an insurance investigator—horrible, low, unpleasant things that might drive an ethical man to the brink of self-destruction.  Luckily, I’m not an ethical man.  I’m a lawyer.  A lawyer who will stop at nothing to get you the money you deserve. 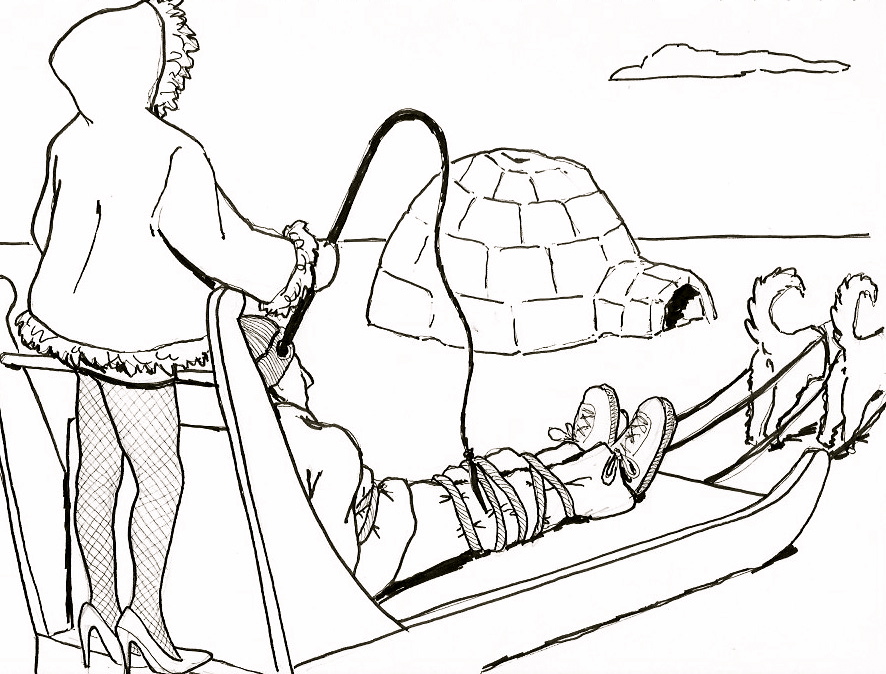 How do I win so many cases?  It’s simple.  If there’s bribery going on, I bribe bigger.  I’m a lawyer and always have plenty of freshly laundered, completely untraceable cash on hand.  Nobody—nobody—outbribes me.  These are just a few of the people I regularly pay off to get you the money you deserve: police, other drivers, toll booth workers, mail carriers, asphalt crews, crossing guards, small children, large children, dog walkers, the dogs themselves, judges, courtroom stenographers, bailiffs, senators, congressmen and governors.  Find me a lawyer who has more people in his pocket, and I’ll call him a liar to his face.  Then I’ll choke him and bite off his nose.  See if I don’t.

If, by some small chance, the parties involved in your accident are not susceptible to bribery, I will employ persuasive techniques I honed during my six years as a human intelligence collector at Guantanamo Bay.  How good was I at Gitmo?  Did you ever hear of Khalid Sheikh Mohammed?  I’m not saying I was the guy who waterboarded his fat Ron Jeremy ass and made him squeal like a cut pig.  Legally, I can’t say anything at all about that.  But I can tell you that after Gitmo I was invited to join an elite private security force in Iraq, where my nightly Humvee patrols through the flaming, apocalyptic streets of Mosul resulted in 104 confirmed kills.  Fully half of those kills were certified non-civilian.  Show me another lawyer in Altoona with those kind of numbers and I’ll call him a liar, drive my fingers through his neck, rip out his jugular, and eat it like a soba noodle.

So call now–I stop at nothing.