It’s spring: love is in the air, and I think I’ve finally found someone.  A graphic designer from Brooklyn with a well-trimmed beard and a budding passion for craft beer, he goes by JKDeuces22. He starred me on OKCupid, then I starred him, and now I can feel it: this could be the real thing. I liked the look of him in his profile pictures right from the start: the one of him in India, smiling outside the Taj Mahal. The one of him playfully propping up the Leaning Tower of Pisa. The one with a beagle licking his face. The one with his mom. 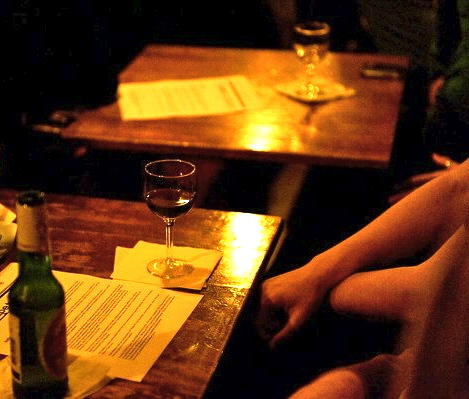 “Message me if you want to be my partner in crime;),” he wrote in his profile. “Extra points if you have dimples and love spontaneous camping trips.”

I do want to be his partner in crime.

I do have dimples.

And I do love—or know I would love if given the chance—spontaneous camping trips. I was, after all, a Brownie. I still have my Troop 369 canteen; sometimes I use it as a flask. So I decide to take the initiative, like the ballsy Girl Scout I’ve always wanted to be.

Where do you go camping? I could use a break from city life, you know?

I’m not sure how good a Bonnie I would be to your Clyde, but I’d be up for trying.

Regret consumes me the second I press send. Why did I use the lame Bonnie and Clyde line? I should’ve told him about the Brownie flask; that would’ve shown him I like to party. Now I’ll have to go back to the OKCupid Quiver of balding shorties who work on Wall Street and spend their nights trolling the web for someone who is 5’1” and has read Outliers.

But a few minutes later, JKDeuces22 writes back!

Although I’m generally wary of men who use emoticons or are overzealous with exclamation points, I can’t help but trust Jack with that All-American-Man smile. He looks like he could be eating a whole apple pie, by a campfire, on Memorial Day. A few more messages zing back and forth: He’s from Connecticut! I’m from Pennsylvania! We both like the Mets! Or at least I pretend to!

We have so much in common.

We decide to go on our first date at a beer garden in Williamsburg. The night before, he asks for my email so he can let me know if he gets held up at work. I say sure, and give him the one I use exclusively for online dating because it doesn’t show my last name. I can’t have the men who Google me finding my LiveJournal from 2002, when I was fat.

Of course, I know how to Google-sleuth Jack, even without his last name. It isn’t so hard once I discover that he graduated from Boston College in 2005 and that one of his favorite activities is lacrosse. There he is, Jack Kandinsky, #22 on the 2002 Boston College J.V. Lacrosse roster. From there, I find high school prom pictures on his mom’s Picasa album. I find the website he designed as an undergrad. I find his LinkedIn profile, Facebook page, and Twitter account. And then I find his friend’s wedding pictures. I let out a small gasp when I see Jack canoodling with a tall leggy blonde. In one picture she is nibbling on his ear. In another they are doing the electric slide. My heart sinks: a definite ex. But they’re obviously no longer together, which can only mean something awful must have happened, right? I bet she cheated on him, leaving him damaged but resolved to heal. I admire his resilience; I’ve been in his shoes before. Now I feel closer to him than ever.

On D-day, I can’t resist Facebook-friending Jack, even if it means he’ll know my last name and have pictorial access to the fat years. “How’d you find me?” He messages after I send the request through. “I can be pretty tricky!;)” I reply.

Throughout the day, I send him funny videos and interesting links that I know he’ll love: a clip from SNL’s weekend update, a recipe for beer bread, the address of a website that sells flannel shirts for dogs. “LOL. Thanks,” he responds. I admit that I usually judge men who use “internet slang,” but how can I judge All-American Jack? He’s been through so much, what with the cheating ex and all.

At 5:45 PM, while in my office bathroom applying a last-minute layer of deodorant before our 6:30 PM date, my phone vibrates, alerting me to a new Facebook message. My heartbeat quickens. I imagine Jack is double-checking that I have directions to the bar; that’s just the kind of man he is.

I unlock the phone. I see the message:

Hey! I HATE to do this, but my boss just asked me go to the Mets game with him and some clients! I really think I need to go...can I take a rain check?;).

I feel my lower lip tremble, but a moment later I suck it up because I appreciate a man who is committed to his work. He obviously really wants to meet me.  Look at those exclamation points. Look at that winky-face. I write back:

Jax! No problem. Really. Have an AMAZING time at the game. Are you free next Tuesday? I REALLY can’t wait to meet you! -Mads

Maybe this is a good thing? Maybe waiting will build the sexual tension leading up to the first date, setting the tone for a long, satisfying relationship? Yes. This is definitely a good thing.

Besides, I have last week’s episode of New Girl saved on my DVR. Zooey will make me feel better; she always does. Back home, I change into sweatpants and heat up a Lean Cuisine as I park myself in front of the TV. Before I turn on Zooey, I flip to the Mets game, hoping to catch a glimpse of Jax on the jumbotron. I smile, thinking of all the future Mets games that Jax and I will share. Maybe we can get matching jerseys? As I let out a sigh of hopeful bliss, the announcer says something about how windy it is in Chicago. That can’t be right, I think. The Mets are playing the Cubs, but the game is in New York.

Then slowly it hits me: I’ve been Cuped.

“What did I do wrong?” I whimper softly as the baseball game blurs through my tears.

These internet guys are all the same. They lead you on with their emoticons and exclamation points, and then just when you think things are getting serious, just when you’re really invested, just when you’re about to go on your very first date, they disappear and block you from their profile.

I check OKCupid and sure enough, Jax already has. :’(