In Florida, a baby’s first word is likely to be hurricane, with a capital H.  It’s that time of year again, and the season seems longer. So much so that I sometimes wonder if it will soon be conjoined with Christmas.

When I was growing up, hurricanes meant nothing more than mystery, parties, and excitement. But that changed in September 1999 when Hurricane Floyd began threatening my barrier island real estate in Florida.

It was a Monday night when Jacksonville’s mayor ordered the beaches evacuated the following day.  The bridges would be closed and no one allowed to return without a pass.  By this time, my husband had already been on the phone for hours trying to find a motel room and had secured one at the Manor Inn, 240 miles away in Perry, GA.

He’d long since given up asking if they accepted pets.  There wasn’t a motel this side of the Mississippi that accepted pets.  Why should we be the ones to burst their bubble!

Sleep eluded me as I tried to calculate the really important things I could pack in our two- door sedan.  My husband, our two cockatiels, Cappie, our cairn terrier, and Rhapsody, our sheltie, were givens.  The rest: paper, pictures and panic.

There weren’t enough roads out of the beach to contain all the traffic—reasonably anyway.  It took us two and a half hours to leave the city limits of Jacksonville and seven hours more to reach the motel.  The cairn, draped across my lap for all those hours clearly thought, “It doesn’t get any better than this.”

People who hadn’t called ahead for rooms stood in the lobby of the Manor Inn and cried.  One very pregnant woman threatened to have her baby on the floor by the registration desk.  The nearest vacancies were now in Alabama.

As we made our way to our room, I understood fully the phrase, “Everybody and his dog.” Dogs arrived that had never seen the inside of a car, much less a motel room. There were cats, birds, an iguana, and a very impressive python.  Some people even brought their children.

When we’d unpacked and dog-proofed the room (moving everything above the high water mark that the dogs might chew or pee on), I got the first hint of things to come.  There was a loud splash and colorful exclamations from my husband.  He’d dropped the new travel alarm in the toilet.  But any port in a storm.  We put it on the bedside table and tried to forget where it’d been a few minutes before.

Did I mention that Rhapsody was in heat?  That she’s a BIG sheltie?  Fastening her leash securely, I prepared to take her outside where she could spread the good word of her “condition.”

I opened the door just as a maid approached carrying a high stack of towels.  Rhapsody lunged at this apparition, and towels sailed like cresting waves as the maid ran in the other direction.  For goodness sake.  It wasn’t like she was a python.

We continued on our way, and when we reached the grass, I was relieved to see a fence between us and the male dog walking down the road.  Have you ever seen a Weimaraner climb a chain link fence?  That gave me some idea of just how desirable our Rhapsody had become.

A few hours later, when my husband turned off the weather channel, I realized the two large dogs I’d seen earlier were camping out on the balcony above our room.  I can attest to the acuity of their hearing, vision and sense of smell.  Nothing moved that they didn’t know about.  They barked, then our dogs barked.  Our dogs barked and the dogs next door barked.  At times the noise threatened to drown out the sound of the cricket who had set up housekeeping in our air vent.  The night passed fitfully until 5 a.m. when, to our horror, the soggy alarm went off. 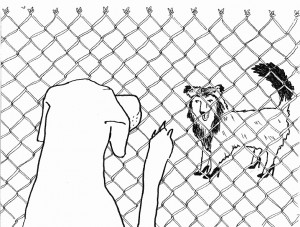 As the hours dragged by, we no longer felt safe in our room.  We felt trapped, unable to get news of conditions at Jacksonville’s beaches.  By Wednesday evening, we’d wrangled a number for the emergency line in Duval County.

“Stay put,” we were told. “There’s a shortage of gas, and the bridges to the beaches won’t open until late evening.”

Thursday morning the soggy alarm finally succumbed, but I was awake by 5 a.m. anyway.  I staggered to the lobby and waited drop by drop for a cup of coffee to brew.  I took one grateful sip and made my way back to our room.  Barely inside the door, I heard my husband yell to a dog “Give me that sock!”  Numbly I watched a brown sock, tossed in the air, glide and dip, not unlike Forrest Gump’s white feather.  It came to rest in my precious cup of coffee.

Floyd proved to be a mama’s boy.  He made a mess at our beaches but nothing a little sweat equity couldn’t handle.  Though he would be nothing compared to Hurricane Katrina in 2005, he still left an enduring legacy that changed our lives.  Today we drive a very large car with all the cargo space we can afford.   We even went so far as to build a second home in Georgia—not that we have anything against the Manor Inn in Perry.

A mama’s boy?  Never trust one.