I have a dog, and I am proud to say that my dog actually thinks he’s a dog.  I say this because I am tired of all the people who say they have dogs that think they are human.  I mean really?  You go to someone’s house and there is a little pipsqueak thing yapping from the moment you walk in until you leave, all the while your host just laughs, saying, “Oh she just wants to be part of the conversation, don’t you pretty girl?”  Or that dog is sitting on the last available place on the couch and so you get a pillow on the floor because little princess sat in her spot first.  Or how about when you get up during dinner to help open some wine and you come back and the dog is licking the hollandaise off your steak.  Nobody even stopped her. “Oh, sorry,” your host says unsympathetically, “That’s her place when you aren’t here you know.”

But the real issue here is that one characteristic of being human is to have a really big brain.  And dogs do not have even slightly big brains.  And this thing about brains is pretty much a fact.  And I know this because I had an uncle who was a microcephalic.  So he had a little brain, but he was still human, for the most part.  Now we loved Uncle Larry, but you know how kids are, they are really cruel, especially when they don’t know how cruel they are.  When we were kids we would play house and tell Uncle Larry to be the dog, which Uncle Larry loved to do.  Now of course when our parents found out we were doing this, they beat the shit out of us for being so mean. (Remember when parents were like that – “I will teach you not to be mean by beating the living shit out of you!”)

But Larry was a good guy and he even eventually married this woman he met in one of those facilities that teach people with learning disorders how to cook, keep house and stuff.  But the really weird thing was Larry married a woman who thought she was a dog!  Honest to God.  I could not make this up. Here was this guy who we taught to be our dog, married to a woman who thought she was a dog.  Honestly, there were a number people worried that there might be some exhibitions of doggy love at that wedding ceremony.  But they behaved.

Now I have always been interested in brains.  I mean I was obsessed for a while.  And what I am about to say will also shed some light on how air travel has changed over the last several decades.  Honestly, there was a time, believe it or not, when you could actually walk through airline security carrying a human brain.  That’s right.  I mean security back then was just a table where some bored guy breathed over your suitcase and let you pass. So I walked up to that table with an actual human brain in a jar of formaldehyde.  The security guy asked, “What is that?”  “A brain,” I said.  “What kind of brain?”  “A human brain.”  “A man or woman human brain?”  I wanted to say, “Can’t you tell?”  “Where did you get it?”  “From a human head.”  “Is it going to spill?”  “No.”  “Okay go ahead.”  And that was that.

Now, you might be asking why did I have a human brain in the first place and where did I get it?  Well, believe it or not, I was a young medical student at the time and someone gave this brain to me.  I mean, when I first saw it, I was like, “Awwww!  Look it’s a human brain!  How cute is that!  I have to have it!”  What one doesn’t realize when one takes home a human brain is that there is more to it than its cuteness.  You have taken on a whole new level of responsibility.  You are now the owner of a human brain.  I learned this the hard way.

That brain was great for the first six months.  It was the center of attention, everyone wanted to see it, everyone wanted to hold it.  I even took it with me when I went to visit other people.  But brains get old and when they get old they are not as cute or fun anymore.  As it got older, it began to lose its cute wrinkled brainy shape, and you could no longer play with it because bits and pieces would come flying off if you swirled it around too hard.  Finally, it began to smell.  People would come over to my place and you could tell they smelled something.  They would look at me as if they immediately knew I had an old brain in the house. 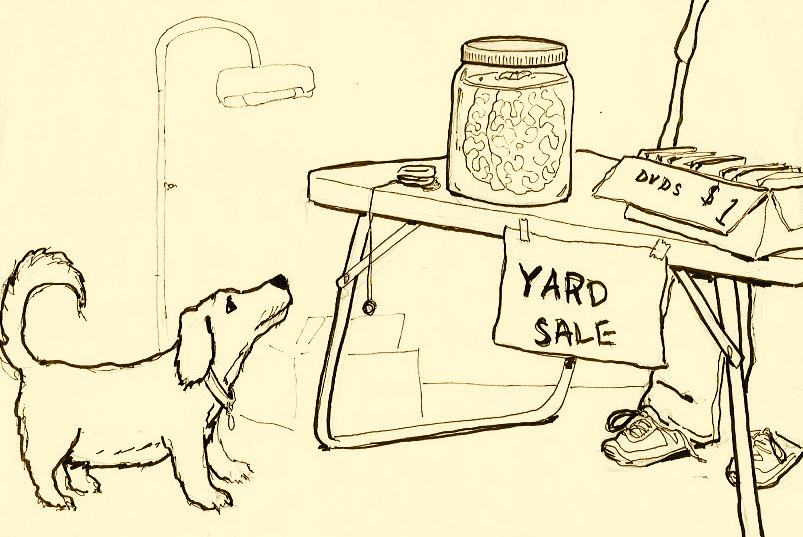 I struggled with this for a long time.  I never considered before that there was a body somewhere with an empty cranium, and here I held all that was most human of that poor guy, ready to chuck it in a dumpster or a public waterway.

And so it sits up there on my shelf, the moments we share growing fewer.  Dogs reach an age when we consider it just and acceptable to put them out of their misery.  Brains are not so easy, it is not hard to imagine that even in a brain that is soaking in formaldehyde there is still at least one thought held frozen in time amidst those grey and white cells, perhaps the memory of a kiss when love was young and fresh, a child laughing from a dumb joke, a dog rushing up in a whirlwind of excitement after a long trip away. Perhaps that memory is the look in someone’s eyes in that moment before he passed away .  How can anyone throw that away?