I stood alone at the bar at Doug & Marty’s, a small expat club in Moscow. Red lights were flashing and “Back That Ass Up” was playing five years too late, or two vodkas too early. My friend Jane was grinding on the dance floor with a cute Russian guy she’d just met.

At the bar I tried to make eye contact with a guy—any guy—but it wasn’t working. Jane motioned for me to come dance with her, but I didn’t feel like being a third wheel. I smiled and waved, stayed at the bar, and spent the next half hour fidgeting with my massive curly hair, trying to smooth it out, tuck in the fly-away frizz, and pull it back into an inconspicuous bun, over and over again. I wiped some condensation off my cocktail glass and used it to “gel” some curls behind my ears so they wouldn’t look like sideburns. I’d also been told that I looked like a Hasidic boy with payot, and Jane seemed to agree.

Three hours earlier, Jane and I had been at home in our warm, Soviet-block-style apartment, getting ready to go out. I was in my room, surveying my three pairs of jeans. I picked my favorite dark pair to wear over my wool tights (it was still zero degrees Fahrenheit in March) and then I put on my standby red tank top and black cardigan. Having been raised in Central Texas, I’d never worn wool tights under my jeans before.

I peered into Jane’s room next door. She wore a sparkly gold top that flaunted her breasts, between which a silver necklace had been swallowed up. Her jeans were vacuum-sealed onto her body and her dirty blonde hair was silky smooth. She leaned into her mirror, expertly applying foundation to her blemish-free face.

“Oh my God, is that what you’re wearing?” Jane asked with pleading eyes.

“Those pants are too big, you look like a stick.”

“Do I?” I asked, twisting around to check out my own butt.

Jane started on her eyeliner, and I knew that in her own sweet way she was just trying to help me. She wanted me on the dance floor too, with my own date. Jane was my only real friend in Moscow, and I was hers. We moved there together for an internship (a semester of administrative work for an orchestra), and neither of us were good at speaking Russian. We relied heavily on each other. I’d try to translate labels for her at the grocery store, and she’d share her DVDs, all thankfully un-dubbed in their original English. I’d locate a decent English-language bookstore, and she’d make me laugh when gusts of arctic wind literally knocked me over.

“Forget your pants, we need to finally do something about your hair,” Jane added.

“Like what?” I asked, my muscles tensing as I leaned against the door frame.

“Yes, it was horrible. It looked like a Halloween wig for a witch’s costume.”

“Well, it looks like a rat’s nest the way it is. Your choice.”

Yes, my hair was unruly sometimes. It was very curly, thick, dark brown, and it looked different every single day. Humidity turned it into a full-on afro, but not a cute symmetrical one that had been styled appropriately. Dry air turned it into a frizzy “rat’s nest.” Rain and snow weren’t good either.

“Jane, I’m doing the best I can. I’ve got ten pounds of hair product in there—if you lit a match, my head would burst into flames.”

“I can’t actually change my hair; I can only try to control it. You know my mother’s black, and black hair is totally different from hair like yours.”

“I’ve never even seen your mother.”

I went into my room and pulled out a photo of my parents. My mother sat with regal posture on a park bench next to my father, who’s white with a mustache and a gentle smile. Mom had what my father called a “cream in your coffee” complexion and very short black hair, a broad nose, a strong jaw line, and the cheek bones of a queen.

“She’s not even really black. Get over it and fix your hair,” Jane said, handing the photo back to me.

“Well, her whole family is black, even if they’re not black enough to impress you.”

Jane shrugged and went to her closet to find her high-heeled boots. I continued to stand in the doorway and thought back on other people’s reactions to my mother’s appearance. Some people didn’t realize she was black, because in truth, she had an exotic face—they thought maybe she was Cherokee or Mexican or whatever came to mind. People’s reactions to my appearance varied too. Many black people recognized my roots, but others guessed that I was Puerto Rican, Jamaican, or even Egyptian, depending on how good my tan was at the time. Spanish people guessed Spanish, Jewish people guessed Jewish, and so on. When someone asked my mother that blunt, recurring question “What are you?” she once said “I’m a real piece of Americana.” 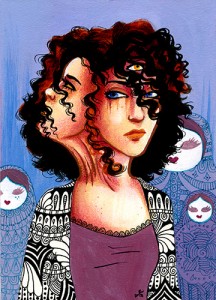 My mother didn’t talk much about her past, but slowly over the years I learned enough to figure out where I came from. In 1939 my mother was born in Lexington, Mississippi, which was a dangerous, segregated community. To escape, her family moved up to Detroit during the Great Migration, where my grandfather found work on a Chrysler assembly line. That couldn’t have been easy, and I was proud to have such determination in my lineage.

I wandered back into my bedroom and flopped onto my bed, to think about how my rat’s nest was chasing all the Russian men away. The fact that no one in Moscow shared my hair type certainly exacerbated my insecurities. In three months I’d only seen two people of color: a black woman attending a symphony orchestra concert, and a black man dressed as a piece of chocolate, passing out flyers for a nearby candy shop. On top of that, it was very popular for Russian women to dye their hair blonde or red. It appeared that Anglo Saxon hair was attractive, and black hair was not.

The following Friday night, Jane and I were getting ready to go out again. As I stood in front of the bathroom mirror I made a decision. Instead of trying to force my hair into submission with all of my “damaged” hair products, gallons of which I brought with me from the U.S., I would just wear it down and leave it alone. I wanted to make peace with my asymmetry, coarse frizz, and errant baby hairs. Jane didn’t say anything, maybe because she’d given up, maybe because it looked better than the previous weekend, or maybe because I’d finally taken a crucial step toward being myself.

Jane and I went to a local bar this time. There was a small dance floor in the middle and a handful of cream-colored tables under green lights along the edge of the room. Jane and I stripped off our bulky winter coats and ordered a plate of pickled vegetables with two shots of vodka.

Two Russian guys at another table saw us unaccompanied and came over. Slava introduced himself in broken English, along with his friend, who didn’t say a word. They sat down and ordered some more vodka. Slava was a 30-something journalist for a local paper, covering human interest stories, something about bicycles, and after some time, I realized that Slava was talking to me. He looked at Jane every now and then, but he was mostly checking me out. Despite my urges, I hadn’t been fidgeting with my hair, or trying to fix it, all night.

Slava was not what I’d call an Adonis. His greasy, stringy black hair was pulled back into a low ponytail, his teeth were in total disarray, and he was wearing blue tinted sunglasses indoors. But who cared? Another round of vodka shots was ordered, a Russian slow jam came on, and Slava asked me to dance. We went onto the floor with a handful of other couples, leaving Jane at the table with Slava’s silent friend, and it wasn’t long before Slava and I were making out, arms wrapped around each other. I’m sure it wasn’t pretty, but the positive attention was intoxicating. He was even gently stroking my hair.

It was already 3am, so I said goodnight to Slava and walked home with Jane. I’d had too much to drink, so in a somewhat orderly fashion I went into our bathroom and threw up. But I was happy, kneeling there on the bathroom floor. Someone thought I was pretty and it made me appreciate my hair the way it was.

Down the hall I could hear Jane on the phone with her sister back in the States.

“Oh my God, it was the most repulsive thing I’ve ever seen. She managed to find the ugliest guy on the planet and made out with him, in front of everyone!”

I was OK with that. And in that weird moment, in which I loved my hair, I felt closer to my mother, and felt great about being a real piece of Americana.