“So…you REALLY want to know about MY New York? Phones were in the kitchen, water came from faucets and ice coffee was when you left your cup on the fire escape. Bad neighborhoods were bad neighborhoods. Times Square was a place you stayed away from. The ‘D’ in Avenue D stood for Death… and Drugs. There was no Park Slope South or Williamsburg East or Harlem Light. My New York had junkies and bums and drunks, graffiti and garbage and punks. I mean real punks—like The Ramones. They were from Forest Hills. And if you knew how growing up in a neighborhood like Forest Hills or Bensonhurst or Canarsie or Parkchester or Tottenville or Washington Heights—or any other place you would call a small town but we call a ‘hood—if you only knew how it could be just as suffocating, just as limiting, just as provincial as where you came from, you’d know why we have to find a way out, too…”

Most people leave their hometowns and move to NYC because it’s the only place where they can pursue their dreams. But what if you’re already from New York City? Where do you go to pursue yours? How do you run away from home when you already are home?”

Ever see a photograph of one of those horrible old-time zoos with the tiny metal cages with the iron bars where the animals pace back and forth and back and forth and their vision is limited to the narrow spaces between the bars? Well, that’s what it was like for me whenever I looked past the bars of the fire escape outside my bedroom window in the top-floor tenement walkup in The Bronx where I grew up.

But to my family, that apartment was the best place we’d ever lived. Because my family, are what I like to call “Mayflower” Puerto Ricans. They came to New York in the 1920s and ’30s—way before the big migration after WWII—and moved into what’s now called “Spanish” Harlem, where the soon-to-be-displaced Irish, Italian and Eastern European immigrants who came before them said, “go back to your own country.” No one told them Puerto Rico actually belonged to the United States.

So years later when my parents, Luz Rafaela Ramirez Beltran (a.k.a. the “Jackie O of East 103rd Street,” because even though she was born in P.R., she “spoke like this”) married Rodolfo Valentino Carlo (“Nice-Guy Rudy from East 106th”) they swore their children would not go through the prejudice they did. Their children would have American names: Michele and Kevin. And we would grow up speaking only English—a decision that would come around to bite us all in the culo.

I was five years old and drawing, behind the plastic-covered couch in my grandmother’s, my abuela’s living room in Washington Heights. My little brother Kevin and I had been living there all year while my mother was in and out of hospitals. I didn’t know what was wrong with her, or when she was coming home—but there was a phone on a table at the end of the couch. That’s why I drew there. My Aunt, my Titi Ofelia was always talking to someone…and if she didn’t catch me, she’d keep speaking in English and maybe…I’d find out when my mother was coming home.

“The problem with Michele is, our sister brought her up to be white.”

I scooted up to the very end of the couch as Ofelia lit another cigarette. I squished my face against the back of the couch to hold my breath.

“Always pretending she’s something she’s not, that princesa of a sister of ours. When is she coming home?”

Spanish. The mystery language my family used for phone calls, lost tempers and secrets. Secrets like Uncle Junior, my father’s younger brother. He came to see us one day before my mother got sick.

“You swear? On what? When was the last time you saw our Mom...or your kids?”

“Soon, man. Get this monkey off my back…sell a few paintings...”

“Monkey? Did Uncle Junior bring me a present?”

Why was everything in this family always a secret?

When my mother came home from the hospital my father moved us away from abuela’s to the top of The Bronx, where we were the first and only Puerto Rican family to ever live in the building. I knew this because my father told all the De Lucas, O’Donnells and Kowalskis we came from “The Italian part of Puerto Rico.” It worked. My brother and I got free egg creams at the ice cream parlor and no one spilled garbage in front of our door, the way my father said people used to do to his family in Spanish Harlem when he was growing up. 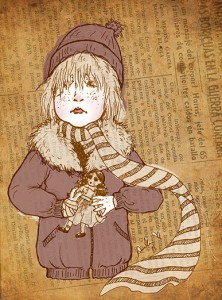 But outside our door was St. Peter’s Park, the playground down the block, where all the neighborhood kids went to play from right after breakfast till their moms yelled out the window, “Dawn! Ant’ny! Nicole! Pasquale—dinna!”

“In St. Peter’s Park we kids wore the proud scars of playground battles: lumpy heads, scabby knees, missing fingers—hey, there was no padding under the monkey bars back then. But there were broken Rheingold bottles! No, not the ironic hipster Rheingold—but the swill guzzled by old men with no teeth who would die soon. Yeah, there were broken bottles and if you fell on something and got cut, it was your fault: “Stooopid!” In my New York seven kids would share a soda, eight a piece of gum, we called it “ABC,” Already Been Chewed, and if you dropped it, you kissed it up to God and stuck that shit right back in your mouth. No one ever got sick. If you survived 4th grade in my New York…you could survive anything...”