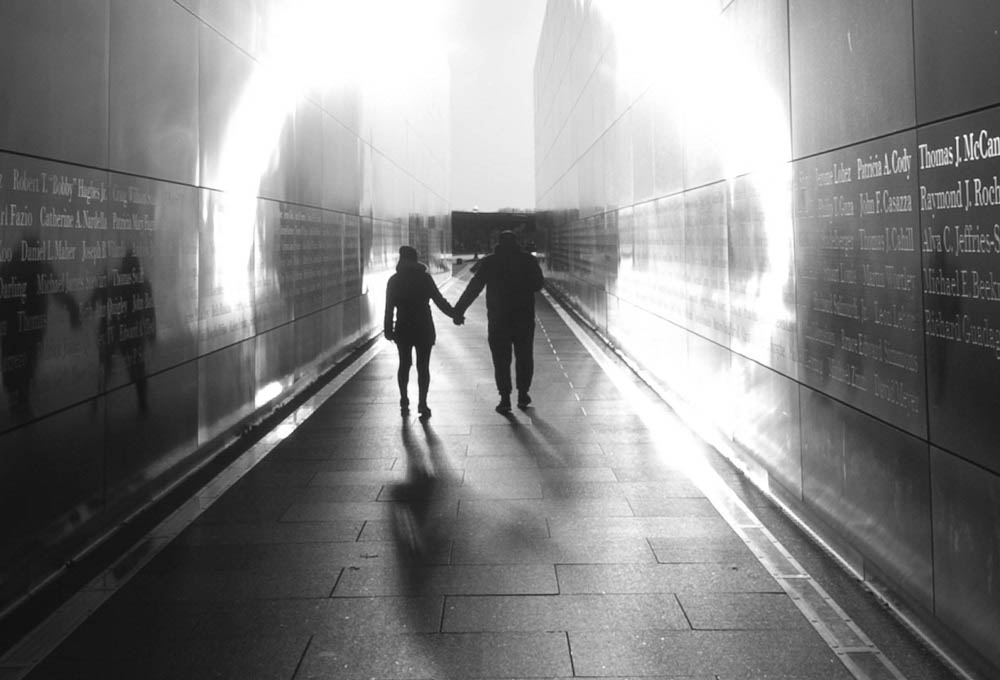 Angel came down from heaven yesterday.
And stayed with me just long enough to rescue me.

In the living room of my parents’ house—the house I grew up in on Long Island—workmen were fixing things. Ladders leaned against walls. Drop cloths covered the furniture like burial shrouds. Outside the front door, Frederic was waiting for me. Happy to see him, I wasn’t even mad he’d been missing so long.

“I wanted you to come back so badly,” I said.

In 1980, I took a two-year leave of absence from Parsons to become a rock star. I told the instructor, “I want to sing like Bette Midler and Janis Joplin.”

“Those are two of the hardest voices to imitate. You’ll have to scale your dreams down.”

Discouraged yet determined, I went to auditions where I’d sweat and forget words. I didn’t become a rock star, I became a waitress. Big-tipping customers became my groupies. I worked at Cafe Borgia in Greenwich Village—across from Figaro, and one block from my fourth-floor walk-up on MacDougal Street. Hotel Earle on Waverly had lost its charm; no more colorful speed freaks and poets like when I’d holed up there as a runaway.

My apartment, a block from Washington Square, had a plastic shower stall in the living room next to a rusted metal pipe that stuck up out of the floor. The bathroom was a closet with only a toilet. Anyone taller than my petite frame had to sit sideways. The kitchen had a deep porcelain sink large enough to wash a baby. My home reminded me of bohemian writers and hippie musicians in a neighborhood stuck in a time warp.

It had been five years since I’d run away and discovered the magical village where people still wore tie-dyed shirts and scarves for belts. Acid rock blared out of windows. Everything I’d fallen in love with was still there—cafes, comedy clubs, thrift shops, used records and books, rock clubs, and a head shop. Electric Lady Studios was two blocks north so on my days off, I hung around the entrance, desperate to peek inside and see the famed mural Jimi Hendrix commissioned. Two long-dead rocks stars were my only friends—I could feel Hendrix walking beside me and hear Janis cackle.

A new customer came to Café Borgia every afternoon and ordered a cappuccino with a spritz of almond extract. He was in his late twenties, average height with a slim, muscular build. His sharp angular cheekbones were framed by wispy, reddish-brown hair. His eyes looked as sad as mine. Every day, when he walked in, my mood lifted. Frederic stared at my face—not my breasts like other guys did. Like me he seemed in need of a tether to hold onto.

One day my boss was out and business was slow. It had been a month of watching this guy watch me as I trotted to tables serving café au laits and espressos. I walked over to the marble-top table with its swirly wrought iron legs. “Can I join you?” I said. Without waiting for a response, I plopped down in the empty chair. He looked startled but a shy smile crept onto his face.

I began talking at length about my favorite topic: me.

“I went to an audition last night. A band was looking for a singer but when I got to the mike my knees were knocking. The song was Twist and Shout but I lost my voice and all I did was tremble. Maybe I should give up and go back to art school.”

“I used to be a ballet dancer,” he said.

He took a sip of his cappuccino. There was a faint smell of the sweet almond flavor. He put his mug down, a touch of foamed milk stayed on his upper lip. I fought an urge to wipe it off. He seemed like someone to be gentle with, to protect.

He said, “I had to pray before I went onstage.”

“Why? Are you Catholic?”

“Nah. Raised Christian Scientist but I don’t follow it.”

Frederic’s eyes looked haunted. “My dad and I don’t talk much. Mom died a long time ago from breast cancer.”

“Doctors couldn’t help her?” I asked.

One day I asked if he would help me word an ad for the Village Voice. I needed a roommate who could pay enough rent so I could rid myself of the two roomies I was suffering with. One was a slob and coke dealer. The other slept in the living room next to the shower. I often came home to find empty beer bottles, overflowing ashtrays and cocaine packets in my bedroom. It’s not that I was against drugs—just didn’t like the parade of people. The dealer entertained his coke customers in my bedroom. He also ate my food. One time I opened a plastic container in the fridge to find bite marks in my leftover chicken.

Frederic’s response was, “Instead of writing the ad, can I move in?”

“But I have to overcharge the roommate.”

When I told him how much he said, “That’s cheaper than what I pay now.”

Frederic moved into the eight-foot-square bedroom on the opposite end of the long, narrow apartment. We made a pact to be platonic, like brother and sister. We picked out groceries together. He’d pay, I’d cook. Often, he surprised me. One day a brand new wooden dresser was in my room.

“Look at the marvelous grain in that oak,” Frederic said.

Another day, a kitchen table appeared.

“This was made without nails, only wood pegs. Isn’t that remarkable?” he said.

He frequently sauntered into the kitchen with a new book. He’d open it and say, “Smell that. Isn’t it magnificent?”

He dragged me to Yankee Stadium. By the third game I was cheering and doing the wave. We played board games, smoked cigarettes, and drank quarts of Stolichnaya into the wee hours. I’d win at Scrabble; Frederic always won Trivial Pursuit. I blasted Hendrix and Zeppelin. He played Vivaldi. We both loved Grace Jones. One day, Frederic’s five-year-old nephew visited and shook his little hips singing, “Pull up to the bumper, baby, in your long black limousine.” I laughed so hard Diet Pepsi sprayed out of my nose.

Frederic confided he was always skinny and shy and got picked on in school. It was easy to hover in his doorway when I felt depressed. He’d put a book down on his bed, walk over to me, stare intensely into my eyes and put his hands on my shoulders. After a gentle squeeze, he’d make a clicking sound you’d give a horse to giddy up. Then he’d grin and say, “All better?”

One day he announced, “I quit drinking. I’m an alcoholic.”

I was alarmed. He drank much less than I did. Out of pity, I clipped magazine articles and brought him books about alcoholism. I was the last to notice my drinking problem. People began to comment. Self-conscious, I began to conceal the amount I drank. Liters of Bacardi were stashed in my closet and I stuffed mini bottles into my purse. Frederic nagged me to quit. I got mad and defensive.

In the winter when I was twenty-six, Frederic squeezed my upper arms and shook me. A vein popped out on his forehead and his eyes welled up. “If you don’t stop drinking,” he shouted, “I’m leaving! I can’t watch you kill yourself anymore.”

I went to rehab and our bond deepened.

At twenty-nine, I no longer needed Frederic in the same way and feared I’d never marry if we kept playing house. Every guy I dated got jealous so I asked Frederic to move out. He was hurt, I felt awful, but we talked it out until he understood. We were happy when he found an apartment only two blocks away.

I fared well but Frederic did not. He became increasingly lonely. He wrote letters to a Japanese woman who’d placed an ad in New York Magazine. They graduated to phone calls, then met and fell in love. I was lucky she wasn’t threatened by me. We liked each other.

Six months into their relationship, she told Frederic her visa expired so she had to return to Japan. They married and brought me a hand-sewn silk album filled with smiling photos of their wedding in Japan.

Then Frederic began to get stomachaches.

“Nobody has diarrhea for more than a week,” I said. “Something’s wrong.” I begged him to go to the doctor.

“Quit nagging,” he said. “Remember you insisted I see a doctor for that bump on my leg? It turned out to be nothing! The doc said, ‘Put a hot washcloth on it.’ Then he charged me two hundred bucks.”

Panicked, I pleaded for help from his wife and sister. The three of us ganged up on Frederic until he relented.

The doc said, “It’s colon cancer.” When we all stopped breathing, he quickly added, “If we start treatment immediately, you’ll beat this.”

Frederic’s wife called me the next day, crying. “He won’t do the treatment.” She handed him the phone. “I’ve been to the Christian Science Reading Room,” he said cheerfully. “The illness only exists in my mind. God doesn’t want us to suffer, so we just have to pray.”

For three weeks, I yelled, pleaded, cried. Nothing worked. After a year of watching him deteriorate, he said he was moving to a hospice. I demanded that he come live with me instead. Although touched by my offer, his voice choked out, “No, it’s too embarrassing. You don’t know what you’re offering. I’d ruin your life.”

During these discussions neither of us ever mentioned his wife. I think our friendship was stronger than his marriage. Despite begging him to reconsider, he refused my help. The bus to the hospice took an hour. The halls were gray, the carpets brown and the walls sagged from low-budget neglect. The nurses smiled at me the way cult members do. Frederic never wanted me to leave so I’d stay for hours. As his illness progressed, I’d stepped in to save his computer business. It was increasingly difficult to lose five hours out of a work day but I stayed with him anyway, three times each week. The magical thinking in the misguided hospice had infected his brain. “Hey, look!” he said during one visit. “I’m doing much better! Want to see?”

He managed to pull himself to a seated position. His scrawny legs dangled over the side of the bed. He pulled the aluminum walker to him and leaned against it to stand.

Forcing a smile, I watched as he struggled to take a step. Then another. And one more. He looked exhausted. There was sweat on his brow. “Can you help me get back into bed now?”

I jumped up, relieved there was something I could do.

I wanted my love to wash over him, aching to free him from this crippling cancer. I held my composure until out of earshot. I sobbed for the long bus ride home.

By the end of his third year, Frederic looked like an Auschwitz prisoner. As I stared at his face, cupping his hand inside mine, I said, “You saved me.”

He was so weak, I could see it took a great effort, but he squeezed my hand. He looked into my eyes and said, “And you saved me.”

A few days later, my Frederic was gone.

Print
Dorri is an award-winning writer whose work appears in The New York Times, Marie Claire, Woman’s Day, Yahoo, Ravishly, The Fix, and Brain Child. Her short stories appear in many book anthologies and Olds is a member of the American Society of Journalists and Authors (ASJA).
More from Author
2 comments on “Frederic”

Sally Olds
So moving! And so beautifully written.

Sharifa
Very Well written and a beautiful story. Thank you for sharing.