When I was four years old I broke my mother’s heart when I announced that I wanted to become a Catholic.  A few weeks earlier I had marched into her bedroom and made a slightly less surprising proclamation.  “Mommy, I want a penis.” When she explained to me, very technically, why this was impossible I shrugged and told her, “I’ll ask Dad.  I bet he’ll say yes.” (He did not.)  I wanted a penis because, after several failed attempts, I learned that it was essential if one wanted to successfully pee standing up.  My reasons for wanting to become Catholic were far more complex.

Standing in the kitchen of our house on the North Side of Pittsburgh that morning I tried to explain my motivation for this leap into faith to my mother.  She was a late in life lapsed Catholic.  When she was in first grade the nuns would rap her left hand with a ruler when she tried to write with her dominant side.  When she lived at home during college she and my uncle would replace Sunday Mass with a beer at Goofy’s Pub and my grandmother was none the wiser.  The two of them got into endless fights as they planned her wedding to my father with my mother’s most clear victory being the short white mini dress she wore without a veil in the ceremony.

Over Cheerios, I made my case for Catholicism and consented to a series of promises.  Yes, to weekly Wednesday CCD classes instead of playing after school.  Yes, to sitting still in church every Sunday.  Yes, to accepting Jesus Christ as my savior.  I would do all of these things as long as they ensured that I could make my first communion when I turned five.  By the time she cleared my bowl away my mother had gotten to the bottom of things.  I was not newly pious or awakened to the power of the Lord Our Saviour, I was obsessed with the long white dress and veil my mother fought so very hard against less than a decade earlier.  I wanted to be Catholic because I want to wear a first communion dress, a beautiful wedding dress made for a girl just my size.  My mother and I came to a solution.  I would not lie to her about my love for Jesus, and she would make me a bride costume for Halloween. 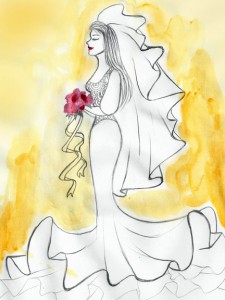 A few months later we were walking through Oakland past Heinz Cathedral, the stately gothic church in the center of the University of Pittsburgh campus.  As we passed the front steps a wedding let out.  My mother led my gaze to the bride.  Instead of feeling elated I was heartbroken.  “Nobody told me, nobody told me.”  I was so upset to be ruining this beautiful bride’s wedding even walking by in yellow Osh Kosh overalls and a turtleneck with butterflies on it.  I couldn’t ruin this very important day, I had to run away.

To me being a bride meant being beautifully in love, and every record that my parents ever played for me, from the soundtracks of The Music Man or Guys and Dolls, to the Beatles, told me that love was the answer.  According to these sources, people in love got to wear floor-length gowns, sing pretty songs on bridges or in Cuba and sometimes, if your name fit the rhyme scheme, have the person that loved you sing songs to you in French.  Love promised a happily ever after and a magical finality.  It was truly the greatest privilege about being an adult.  My mother’s wedding dress shenanigans aside, she still got to dress up and go to parties with my father.  She would kiss me goodbye, leaving a small cloud of Shalimar in the air around us.  My parents were the real Marian Paroo and Harold Hill or Sarah Brown and Sky Masterson.  I knew, beyond anything else, that I wanted to grow up to be Michelle, Paul McCartney’s belle, someday.

Some children, when introduced to the concept of mortality, process this knowledge into an irrational fear of death.  This happened to my sister and it meant that I could never play her “I Dreamed a Dream” from Les Miz because she mis-heard the line “We’re all already damned” to “already dead” and it would launch her into crying fits where she would walk through the house wringing her hands and repeatedly reminding us that we’re all going to die.  She was four.

I on the other hand turned my love of love into a fear of losing it.  Every morning my parents and I would pile into our dark brown Mitsubishi Colt and drive into downtown Pittsburgh.  Our first stop would be to drop my father by the firm where he worked downtown.  My mother would time our drop off to a red light where my father would kiss her then me goodbye.  One morning as we approached our timing was off.  The light was green and my mother pulled over quickly.  My father grabbed his briefcase and leapt out of the car, neglecting to kiss either of us.  I was distraught.  I could not be convinced that he was ever going to come back to us.  It wasn’t until I heard his three note whistle as he came through the front door that evening that I realized that we might be OK.  He knew he was never to make that mistake again.

Still I was never fully convinced.  While my parents showed no signs of distress in those years, I was so insanely devoted to them, and to the idea of growing up to be them, that I couldn’t shake my seeds of worry.  When I got my first pets, goldfish, I named them Paul and Lisa in their honor.  One night on Channel 13 there was a nature special on Japanese fish that included footage of fighting fish, pushing themselves up against a glass divider in an attempt to get at each other.  When the divider was lifted they attacked, simultaneously sucking the air out of their little lungs and dying.  I couldn’t get the image out of my head and for the nights to follow I would sneak downstairs to check up on my parent’s namesakes just to make sure they were still OK.  I couldn’t imagine a world where they weren’t.