A postcard taught me everything there was to know about Florida. It looked like Gilligan’s Island, but with mermaids, and I thought my grandparents were the luckiest people in the world to vacation there. Then they came home with my souvenir, and I knew Florida was ten times better than New Hampshire because our stores had nothing half as beautiful as my new pearly pink, plastic change purse. Iridescent as a gasoline rainbow on the water and decorated with a flock of shocking pink flamingoes, it was my most prized possession. I loved the way it shone in the sunlight, the way it caressed my cheek, the way it smelled so good that I couldn’t inhale deep enough, like the new car I’d sat in once.

Its benzene scent was still heady six months later when I opened my closet and donned a pair of shorts and a T-shirt, instead of my school uniform. It was a strange Friday all around. We were going on a field trip, my first, and I needed to retrieve the wallet from its secret hiding place behind my shoes.  It contained 26 cents, all the money I owned, which I wouldn’t ever have thought to bring, except Sister Theresita insisted. Three times she told us, “Be sure to bring some money, in case there’s anything at the beach you want to buy.” 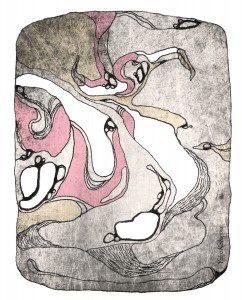 Of course we all knew there weren’t any stores at the beach, but no one would contradict her. She was the teacher, after all. And speaking for myself, at least, I would have died rather than disappoint her. Maybe she planned to take us to some other beach far away that we didn’t know about. Maybe a place that looked like Gilligan’s Island with mermaids.

Mama warned me it was a dumb idea. “There’s just an over-priced snack bar,” she scoffed. “And besides, you’re bringing your lunch.”

“But Sister said three times, ‘Be sure to bring some money,’ I said. “I don’t want to get in trouble.”

“Bah. She’s not even from around here. She’s in for a surprise,” Mama said, turning back to her pan of scrambled eggs.

I rode in a purple convertible that all the chaperones coveted, but I didn’t like it much. The wind whipped my hair in my eyes, and my sweater wasn’t warm enough for the overcast morning. There were four of us crammed in the back seat, all misfits. I was the youngest in the class, branded early as the baby. Then there was Wayne the wild kid, Celia of the scratchy voice and kinky hair, and Keith, the cute but poor boy who made my heart beat faster. When we passed a Coppertone billboard, the famous one showing a little girl walking topless on the beach with a dog pulling down the bottoms of her swimsuit to expose her white behind, I looked the other way. Blood rush to my cheeks as the boys pointed to it and snickered.

“Oh, isn’t she cute?” our chaperone said, patting the lavender headscarf that tamed her bouffant.

I pretended not to hear. One person’s cute is another’s immoral, even at age six.

When we got to the beach it turned out to be the same old one I visited year round with my family. The most impressive thing about it was the boulders, which Sister wouldn’t even let us climb. The snack bar was closed, and there weren’t any other stores in sight.

We searched the tide pools for starfish, and walked along the water’s edge like clutches of sandpipers, racing the waves as they advanced and receded. We dug with our toes for the elusive clams that blew taunting bubbles, and tested our balance against the tide that swept the sand from beneath our heels. It was an impossible contest to win. Sooner or later we had to step back with grace or fall back with an undignified splash.

At noon, one of the chaperones unpacked a Styrofoam cooler stuffed with twenty-seven brown paper bags, identical except for our names printed on the outside. I welcomed the chance to hunker down in the warm sand with my tuna fish sandwich and tonic. Then I ate my Ring Ding and took a quick stroke and sniff of my change purse before tucking it back in my lunch bag for safe keeping. I was still peeling my orange when Sister Theresita announced clean-up time.

Faster than a seagull diving for a potato chip Wayne swooped in, arms outstretched like an airplane, and grabbed my lunch bag. He stuffed it under his arm and grabbed a dozen more from all the other girls on nearby blankets, kicking sand in our faces as he sped away. He was gone before I could speak a word. My wallet, my favorite possession, was still in that bag.

I jumped up and tugged a chaperone’s sleeve. “Wayne took my lunch bag with my wallet in it!”

My lips were moving, but I might as well have been dumb. The breeze carried my voice with it down the beach in the opposite direction.

I ran to our teacher. “Sister, my lunch bag got thrown away, and I…”

“Go on,” she said, with her business face.

Wayne was everywhere all at once, uncountable. It was so unfair! He was a nuisance: a loud, intrusive, obnoxious thief. Why didn’t someone stop him?

I ran to the garbage can, taller than I was, and peered through its wire mesh to see if I could spot my bag among all the others. I knew only that it was out of reach somewhere at the bottom, under twenty-six identical, crumpled, brown paper bags.

Our driver herded me back to her cold purple car, babbling about what a lovely day it had been.

“Yes, indeed, a gorgeous summer day,” she continued. “You kids sure are lucky. We didn’t take field trips to the beach when I was your age.”

I wished I’d gone to school with her.

I slid into the back seat, silent as a sand dollar, and turned my head away from the others as if to watch the receding waves. The more I tried to forget, the more my eyes blurred. But crying wasn’t an option. I hadn’t been called a baby since turning six back in November.

Wayne dove in right behind, like Superman, landing against me with a mighty whump that punched all the air from the upholstery and my lungs. I sighed with the naugahide. It was a long drive back to school.