Throughout high school I worked at my father’s restaurant on Saturday mornings. It was a luncheonette in a dying, industrial section of Philadelphia called Kensington—a place that used to be filled with dye-houses and scrap metal yards, but was gutted in the 1970s as factories moved south and overseas. By the 1980s only a smattering of manufacturing remained along with one scrap metal yard, but as long as they were operating on Saturday mornings, the luncheonette, what we would forever call, “The Store” was open. It had been a grocery store when my grandparents ran it, and they, my father, and his sister had all lived above it. When my father decided he wanted to marry my mother, he turned it into a restaurant with the aim of making it more profitable while open fewer hours. When I was about 14, my father started taking me with him.

On Saturdays my father slept late, getting up at 4:15 a.m. instead of his usual 3:45 a.m. He’d make the coffee before waking me, and in the winter he’d warm up the car before I got in it.

It was the 1980s and we’d listen to Larry King on the radio as my father drove. Long before the days of CNN, King hosted the Mutual Broadcasting System’s nightly talk show that aired nationwide between midnight and 5:30am. King didn’t pander to anyone back then. He could mercilessly tease a middle of the night caller worried about going to jail, engage in debate with a critic of some author or politician King had interviewed earlier on the show, or dispense with alacrity the irrational and incoherent. My dad admired how King handled his callers, and I loved how he included me in his thoughts.

The drive from our suburb to The Store was about 30 minutes by car, but it was intergalactic by my sensibilities. My suburb was affluent, largely Republican, and everyone lived in a single home with a backyard. In Kensington, many residents were on welfare, didn’t vote, and lived in tiny brick row houses with concrete stoops. Many of my classmates believed, like our then-President Ronald Reagan, that people on welfare used their tax dollars to buy Cadillacs. But in Kensington I saw litter. Broken glass. Broken homes. The ritual of drinking away a paycheck on Friday.

We washed our hands as soon as we entered The Store and set up in dim light. I filled the six-gallon triple coffee urn, my dad prepared the food, and then the bread delivery would come. This was the best part of the morning. We’d sit—or more accurately I’d sit, at my father’s insistence, while he stood—and butter fresh Amoroso’s Italian rolls to eat with our coffee. If my dad had day-old rolls left he’d have one of those. I always argued that I should eat from that bag as well, but he never let me. This was something I wouldn’t understand until I had my own children, this desire for your offspring to enjoy the best you have to offer.

It was usually dark outside, and still. And a little scary, too. The neighborhood was not without its dangers. My father let in the first few customers of the day one-by-one, locking the door behind them as they entered. When daylight and a steadier stream of incoming patrons arrived, he would unlock the door for the day.

I learned how each customer took his or her coffee or tea, and took pride in beginning to pour when someone walked through the door but before they ordered. There was Alan, Joseph, and Jack, guys who worked their way into the office from the factory floors. Then came Big Danny and Little Danny from the scrap metal yard. Big Danny was about the size of The Incredible Hulk, but exuded an incongruous kindness and softness. I used to tell my dad, “He’s like a big black Michelin Man.” Standing over six feet tall, Little Danny was only little compared to Big Danny. He had a red grizzly beard and red frizz that sneaked from beneath his trucker’s hat. He hunted deer on fall weekends in the Poconos, and dressed for it Saturday mornings in a flannel shirt and khaki vest. I loved waiting on them all, but it was Joe the Greatest who made my knees weak. He looked like the Marlboro Man even though he smoked Winstons.

Joe took his coffee regular—which meant milk and sugar—and his Greek last name rhymed with “the Greatest.” So, everyone called him Joe the Greatest, or sometimes just, “The Great One.” He had an easy, accessible charm, humor, and coolness in every move. On Saturday mornings my father usually greeted him with a shot of whiskey in a small Styrofoam cup. “Hair of the dog that you bit you, my friend.” Joe would drink it and wink at me. I’d hand him his coffee.

There was constant ribbing, or kibitzing, as we called it. “Good thing you look like your mother, honey,” customers would say to me. If someone said, “I was thinking. . .” My father might retort, “How you do like it so far?” Or, “Don’t hurt yourself.”

There were lines, however, that could not be crossed. Jack always sat at a table in the corner. He was loud and obnoxious, and quick with a Jewish joke. My father had grown up the only Jew in his neighborhood, and we’d been one of the first Jewish families to move into our suburban township. Jewish jokes were acceptable among most, as were many ethnic jokes that I wouldn’t dare tell, let alone find amusing today.

But one day Jack was on a roll. “Hey—how many Jews can you fit in a Volkswagen? All of them if you use the ashtrays!”

My father, who took a lot of ribbing in stride, ever fearful of losing a customer, turned off the flame from the stove, spatula in hand, and marched over to Jack. He leaned over him, really getting in his face. Joseph, Alan, and Little Danny were statues at the counter. “You don’t make jokes like that. Not here. You can go if you think that’s funny. Take it somewhere else. Not here.” His voice was low and furious. He marched back behind the counter. “That I don’t have to take. Not ever.” Then he looked at me. “And neither do you.”

My Grandmother emigrated from Germany in the 1920s, while her immediate family remained behind. The Einsatzgruppen shot some of them at the Ninth Fort, and the Nazi’s herded others into ghettos that were later liquidated to the camps. She had 10 siblings, but only her youngest sister survived. A kind doctor had sent her to Switzerland just before the war. Two nieces managed to escape the ghetto, eventually making it to Israel. That made Jack’s joke deeply personal, but I think my father would’ve let it be known that any joke that went that far was not acceptable. Jack was chastened that day, and while still loud and obnoxious, he remained a loyal customer.

At some point on many Saturday mornings, Bicycle George would come barreling in through the door. He was in his forties or fifties, though it was hard to tell because of his childlike mannerisms. More than six feet tall with a disproportionately large, protruding jawbone, gangly arms and legs, he inspired discomfort. He nailed extra-soles to his big, black shoes to keep them from wearing out too soon. His nickname came from the handlebar-free bike he rode around the neighborhood. He took off the handlebars as a preventive measure against anyone stealing his bike. He was always looking for odd jobs, and he sometimes made deliveries for my dad’s restaurant. Outside of The Store he was known as Crazy George, but no one would dare refer to him that way within the walls of my father’s restaurant. 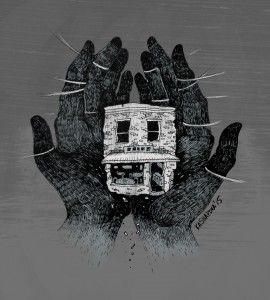 It was a surprise to learn that it was not my father who’d come up with the alternative moniker for George, but my father’s father, whom I’d never known. What I did know about him evoked neither warmth nor curiosity. My grandfather was a Russian-Jewish immigrant. A fearful man, he forbade my father from socializing with their Christian neighbors, worried my father would leave the tribe. He was an older father—around 50 when my dad was born. He eschewed relations with my grandmother’s extended family who had, since their immigration a generation earlier, become part of the wealthy, philanthropic, German-Jewish population of Philadelphia. Some had large estates on the Main Line, rare book collections, and donated art to local museums.

My grandfather spoke broken English, kept the social interactions of his family limited to his own siblings and cousins, and used a cat o’nine tails to discipline my father.

And yet, this was the man who first forbade people from calling Crazy George, Crazy. “He could be your brother. How would you feel if that were your brother?” My grandfather, and later my father, would ask people. I also learned that my grandfather had risked the wrath of his neighbors and customers during the depression for hiring a black woman who came looking for work. “Her belly gets empty, too,” he said in response to their angry questions.

“Someday this will all be yours,” my father would joke on a Saturday morning, his arms wide, offering me a sweeping view of the slicer, the long counter with its green swivel stools, and the sliding glass door refrigerator which always seemed to rattle ominously. Of course, it would never be mine. That was the driving point of his existence.

In 1991, shortly before I graduated college, my father would sell The Store after being held up at gunpoint—knee in his back, .44 to his temple. The neighborhood had become known as “the Badlands” of Philadelphia. Crack cocaine and its deliverers had taken over Kensington. Some of the dealers were the very children to whom my father had once sold penny-candy. Little Danny had long been concerned about my dad’s safety. He had insisted the last few years upon my father not entering The Store alone in the dark. My father would wait for Danny’s pick up truck to pull over and park behind him, and they would enter together, Danny at my father’s back.

My father’s great worry before closing was that his customers would not pay their tab. Any customer could run a tab as long as my dad had met them at least twice and knew where they worked. Some paid it off weekly, some once or twice a month. There was close to $2000 on the tab, which was not an insignificant amount to my parents whose earnings had sustained us with limited luxuries and little savings.

All but one person paid their tab in full before my father left—the deadbeat was a new hire and his tab was small.

My dad calls Little Danny every New Year’s Day, and if I’m visiting, I get to talk to him, too.