Pedro is known to make a puppet-horse of his stump. He nods it up and down, unbends his knee to stretch it out straight as though pulling against a harness. He turns it to face me, the eye an old smooth chafing scar (from early months with the prosthetic) looking at me. The eye stares unblinking above the knee bone that gives the long nose an aristocratic dignity. Gravity pulls what’s left of the calf muscle into a horse face, flat on either side of the rising and falling nose, and the stubbed end is like lips ready to quiver all over an apple. In all the times he has shaken it side to side like this, snuffled it into my crotch as he often does, we marvel at its ability to conjure the happiness of horsey characters – Merrylegs, Mr. Ed, My Friend Flicka. Though for me it’s also wrapped up with the horror of Godfather horseheads, because I can’t look without imagining gore, without remembering what he’s told me, the doctor with tears in her eyes, the gangrene from diabetes too far gone, the fact the surgeons used a chainsaw. He is the love I’ve taken on precisely because he reminds me of how brutal life is, how I’m not the only one who has suffered. And he swings his horsey nose back around, provides the sound effects of snort, nicker or whinny.

This time he pushes the hospital tray about roughly, like horsey wants better food, nosing the domed plastic so it slides off the half eaten cheeseburger and fries. I’m trying hard not to calculate fat content.

The stump horse has the problem of his Siamese brother, the other leg, the one whose foot is being rebuilt, keeping us all here in the room of controls and knobs on flat panels, of gray cotton gowns and machines beeping for attention. This is crunch time, the last possible surgery – so many bones removed already to cast out the osteomyelitis – because only so many surgeries can be done, particularly on a diabetic, before we’re looking at double amputation.

But Pedro’s hopeful aspect springs and springs. Not eternal, no. But he’s not the kind to acknowledge the finite.

It’s 2007 and I’m here because Pedro has the pass to vote. Obama is all about hope too. And audacity. Pedro is both of these incarnate, his Obama T-shirt with the Shepard Fairey portrait, all abstract swirls of inspiringly sophisticated postage stamp red, white and blue. Like, yes, America, but without the bullshit this time. Pedro is hope against reason: hope that he can keep eating junk food, that I’m his wife one day, that his leg will be fine after just one more surgery. He is audacity: reminding me to be careful of his leg hair when I tape him up for a bath, to please remember how much he hates onions when I cook dinner (every dinner), to wear some make-up when we go out, be his hot girlfriend, stop being so grumpy.

I should have, but hadn’t expected horsey nose when I turned into his room. I had expected dressed, in your wheelchair, ready to go. He knows I’m in a hurry, but his mood seems is more scold than contrition. This is a day of greatness, he seems to tell me without saying anything, with only the special reverence he pays the process of dressing. This is a day for big change, great optimism.

So, yes, be patient. Let the guy dress. Haven’t you already given the ultimatum? Only this time with all the weird and warm domesticity to go along with it? Get your surgery and stay with me those six months while you can’t walk on your remaining foot, won’t be using the prosthetic, where you bump your way down the stairs on your ass to get to work, and the home nurse comes with her fresh dressings, and the medical supplies arrive every day on the porch in their cardboard, and my children bounce around you reading them Mr. Tickle and you keep my TV on too long and I seethe at its blue line under my bedroom door. And you turn in late and anyway I’m grateful for your big, big chest and back. Your cool, cool skin. Yes, stay all that time, be with us, be our patriarch, yell at the girl when she won’t get out of bed, make the boy eat his vegetables.

And then, when you can walk again, it’s over. This is what I promise. Over. I can’t do it anymore. I can be your nurse, but after this I can’t be your girlfriend.

Those shitty terms and still, Mr. Hopeful. Mr. Makes Me Laugh, Mr. Smells Good, pushing out of the hospital room with the devil cat tattoo playing peekaboo under his t-shirt sleeve. Each swipe of the wheels a display of impressive arm strength, and the nurses noticing. And for all the toil of folding up the wheelchair and shoving it into the too-tiny trunk of my hybrid, resentment disintegrates when he plays me a mixed tape with music I haven’t heard before – Cousteau, Cold War Kids, some obscure Nick Cave — and it’s all so good. Pedro’s taste is always beyond question.

And how many more changes can you make to the man? Hasn’t he already quit drinking, gotten into AA? All for you, his friends love to tell you, all for you. He could lose his other leg, damn, they say. And he keeps writing new music, singing in his band, going to his day job, playing with your kids, wow.

It’s so true. But I want to hold up evidence that I’m not really that bad. I’m simply not as hopeful. Does hope have anything to say about the evidence? Exhibit one: Cheeseburger on the hospital tray. Exhibit two: My empty bed on those nights you’re not there, those nights when you’re in the hospital for each of the four surgeries you’ve gotten this last year. Exhibit three: My daughter, seven and too wise, her suspicious look that says mom is all too likely to take on distractions from where mom is really needed, mom all too suspected of pushing those burdens someday onto new beasts. 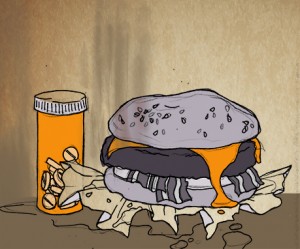 We’re at the church where the voting happens, the old black ladies dressed pretty even though it’s not Sunday, pastel pants suits, hats with flowers or a touch of net. I walk around to the trunk, wrestle out the chair, get pinched during the unfold like every one-out-of-four times. But I’d bet that’s on purpose. I don’t put my fingers in a pinch-clear zone because that might mean I’ve gotten to a place where this really is my life.

He swings over into his seat where I’ve placed it, shifts up the padded arm, and wheels in, his stump free under flopping demin, his remaining leg a mummy baby propped before him.

Inside, the ancient women man the tables and clipboards, the voting booths flank the room, and Pedro breathes life into the scene. “They sprung me from Montefiore for this. I wouldn’t miss it!” he crows and the room cheers.

Kindly smiles for me – volunteer, I’ll bet they’re guessing. Or maybe not. One time I had the humbling realization that they’re not looking at me at all. If you see a person getting pushed in a chair, you either look at the person in the chair or you don’t look. The pusher is all but invisible, a part of the chair itself.

And then he’s done. Voting doesn’t take long, does it? It’s anti-climactic in its efficiency. Pedro’s chattering away, and he’s a hero. And then we’re back in the car and he’s directing his crooked, toothy smile at me.

“I need a Starbucks,” he says. “You too. They’re giving a free coffee to people with voting stubs.”

“How could you forget?” he says.

I voted after dropping the kids at school, in a hurry to get on a conference call, and maybe somewhere there’d been the memory of the Starbucks deal. Maybe I tossed the stub on purpose. A small move of spite.

“I’ll take you anyway,” I say. Isn’t there always a Starbucks on the way?

Waiting in line, he’s all smiles. It’s a long line and I want to be irritated. But of course it feels good. Obama’s going to win, the world around us is full of people refusing to believe in every man for himself, wanting to believe that we’ll help each other, that we have a capacity for hard work and kindness, that they aren’t mutually exclusive. And in that context it feels very right that I’m helping him. I almost want to forget my ultimatum. His big spirit is infectious – he likes the attention, of being admired for that fun personality in the face of obvious adversity. My resentment again tries to sneak in: his illness has been a drain on society that he could have prevented by losing weight. He’d been 400 pounds at his heaviest, a couple of years and an extra leg before he started dating me. But, then, everyone screws up. He’s paid a huge price for his love affair with the cheesiest, stickiest, sweetest and most unhealthy products America has to offer. Probably it could have happened to any of us. In the golds and browns and deep reds of the store, the whirrs and whines of the barista’s machines, he pulls me close, that arm wrapping me up, that kiss buried into my sweater, its impact reaching my hip. I run my hand over his short salt and pepper curls. He could walk again. He could be more independent. There are all kinds of reasons to believe in him. These are the thoughts I’m having when he orders his coffee, shows his stub, then pulls his head back and scans the pastries.

“And… how about a slab of that marble pound cake?” he says, looking up at me, smiling, already tasting the butter and sugar.

“Do you have a couple bucks? I totally forgot and left money at the hospital.”

His brown eyes looking up at me are clear and warm and expectant as a child’s.

So much for my near-swerve into the hope lane. Now I’m back in the mean bitch HOV.

Through the windshield I watch him as friendly Starbucks patrons help him out, his over-enthusiastic nods making me think of his horsey head. His coffee and pathetic bag of pound cake jiggle in his free hand above his lap, threatening to spill.

He makes it to the car and yanks open the door. “What is the problem?” he wants to know. He reaches his long arm over to deposit the coffee and cake on the dash, gets in. He can’t close the door, though. The chair waits for its attendant.

“Well, but there are much worse things aren’t there?”

We’ve had this argument so many times. There’s nothing but audacity in hoping that this scenario will change.

“Fine, I’ll throw it out,” he says. And I want to reach over and smush it all over his face. But instead I pop the trunk, get out my side, go around to his, collapse the chair.

This is bead one-thousand in the strand of moments like it. I don’t realize I’ve made a decision until months later, when he’s walking again on a cane and we’ve gotten most of his stuff moved back in to his apartment, and he asks in a shy, sweet way if we can go out on a date, if he can call me in a week or so. And the vote is no.