One night the sky turned a blue so deep and alive, it was primary,from kindergarten, a kind of basic that could not be other than itself because it was not mixed with anything; it was true.

I was in St. Pete, on the Gulf Coast of Florida, and I was a stranger there. I had no inkling at that point that I wasn’t myself. Having nothing and no one to be true to, I had not stopped to create any definitions on purpose. I was a default setting, the person I fell into being, a kind of rough beast in a motorcycle jacket and black suede, platform, square-toed boots.

The Florida trees seemed odd, as if they sprang from the mind of Dr. Seuss, but also wholly permanent along with the bright, scented foliage so unlike the daffodils in Central Park that workers pull out when they wrinkle to replace with tulips or something else completely recognizable yet temporary. The eye sees everything upside down, but the brain changes it round to avoid vertigo. I was also making reversals, in order to remain upright; I turned St. Pete into an alien world. The wildlife (alligators like tire tread at the road-edges and marvelous birds) made sounds that echoed in the emptiness without skyscraper canyons to damn up their calls.

Before my trip, I had agreed with Woody Allen; I too was two with nature. I stared at it like a tourist. I was attending a workshop at the theatre department of a small college. The theatre was situated beside a swamp by a lake where, on breaks, I watched cormorants, big black seabirds, uglier than ducks but unbelievable swimmers. They would dive down deep, not surfacing until long after I had run out of breath waiting for them, breaking through the water much farther away than I ever expected them to be. Fascinated, I used them as a metaphor for the work I had come there to do; I would dive deep too and come up in a different (surprising) place, revising my work into something completely new. 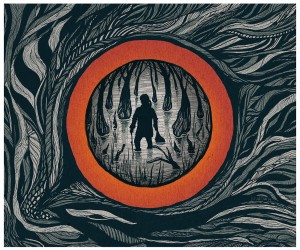 After dinner on that night of the blue sky, I was walking back to the theatre building with a colleague. I had a hard time making friends because I was terrified of getting into relationships. I worried they would take me away from my work. I wore a wedding band to ward off distractions.

From the far side of the road, I saw something large fly up into the air just over our heads. Ron and I stood there as witnesses when this creature (like a pterodactyl) hit the telephone wires and screamed. Then it dropped, twisting in the air, to the swamp. I exhaled.

“We have to do something,”I said.

I had never before had to do anything about any kind of animal.

“What can we do for a bird?”he asked.

In the office of the theatre building I found a number for a wildlife rescue agency.

I didn’t know what she was talking about, and I didn’t want to do anything that called for caution or care.

She said she wouldn’t be able to get to where I was for at least two hours, and the bird would have to be immobilized before then, or else it would work its way over to the lake where it would be destroyed in the most unpleasant way imaginable.

“Pecked to death. Eaten alive. By a thousand fish. Or, if it’s lucky, a gator might be quick about it.”

I resigned myself to help this bird. She gave me directions and a list of supplies.

Doing all of this at a theatre was, in more than one way, a kind of perfect situation. The props department had everything we needed including a flashlight with batteries, a laundry basket, a bedsheet and a case of canned dog food. The costume department might have had a pair of wellies I could have borrowed instead of destroying my favorite pair of boots, but starting out, I wasn’t thinking about my boots. And then there was Aristotle.

As a person who mostly wrote dialogue all day or stared at the surfaces of lakes in search of swimming birds, action was not something I typically lived, but I grew up with a father who would often say, “do as I say and not as I do,”and this irked me. So when I met Arisototle who (being dead yet remembered speaks in a continual present) says, “character is action,”I agreed. I don’t agree with everything Aristotle gave us, but on this point, maybe if only to fight against my father, I got this. We are what we do.

As I began moving out into the swamp to detain a large bird, I could feel Aristotle’s hand at my shoulder. His presence kept my mind off the possibilities of gators, snakes, and the neurotic fear of malarial mosquitoes (which are probably not endemic to Western Florida). He did all this by reminding me that character is action.

Ron held the flashlight and the case of dogfood. I grasped the laundry basket and the bedsheet with a chestful of fear.

“—then what does this make me?”

“You mean you don’t recognize yourself by this action?”Ron asked.

The falling darkness, the softness of the swamp beneath my boots, the symphony of frogs, crickets, the ghost-like hoots from owls, the gnat-clouds, the swoop of bats and random fireflies all conspired to make me want to turn around and rush back into the air-conditioned concrete comfort of the theatre building.

“You’re more concerned with who you are than whether or not you’ll find this bird.”

I had not thought much about who I was, but if character was action, and I was going to rescue this bird, then I was not the person I thought I was, because I would never have guessed myself a bird-saver. I thought I was a citified theatremaker, but as my new boots started to sink into the swamp, and the wet came in through my socks, I was mostly thinking of the fish food I didn’t want this bird to be. Or maybe I was more concerned with failing to help the bird because it would mean that I destroyed my boots for nothing.

Then I cared more about this bird than I wanted to admit.

“So you are who you think you are until you start to care about something or someone other than yourself, and this brings up the potential for change.”

I wanted my life to be about more than my boots. I was walking in a swamp toward a potentially dangerous injured bird. That doesn’t mean I was changing, or that anyone could change, only that I wasn’t who I thought I was. So who was I?

A heavy smoker. I had signed papers to let my mother die instead of putting her on life support. I had refused to marry a man who I felt was too needy. I lived alone and expected to live alone for the rest of my life. I wasn’t close with my only sister. I had no need for nature except that paper (and oxygen) comes from trees, and as a writer, I used a lot of paper (and oxygen), so I had a relationship with trees, but I would not have classified it as a loving one. I owned no pets or plants. I had probably littered somewhere. I was selfish.   A bad person. If I found the bird, I thought it should slash at my eyes.

Then I wondered if the woman on the phone had only said that to frighten me. Maybe she wanted me to tell her, “lady, there is no way I can go out into a swamp and capture an angry, traumatized bird,”because she didn’t want to come down here anyway. Maybe she didn’t care about another bird at that time of night.

I thought nature-loving people would sound kinder. I must have been wrong about nature or people or everything. I was apparently wrong about myself, because there I was in a swamp straining to see, now that night had fallen without even a moon to brighten it. The street lights were too far off to help. If I looked at them, I lost the slight ability I had to see in the dark. The flashlight seemed like a meaningless prop.

“I’m training it on the ground, moving it back and forth,”he said.

With blindness came sound. Every slithering thing, every night creature seemed to be rising to life in that swamp and alerting the world to its presence. I heard caws, hoots, clicks and calls, whispers and coughs, sighs and hums. I was relieved I could not see what creatures might be contributing to this cacophany. The earth seemed so dark, there was an arc to it, as if we might fall off if we walked out too far. And yet we kept on walking.

Suddenly Ron’s light caught the bird’s eye so that I could throw the sheet over it. I did not have to get close enough for it to slash at me with its razory beak. The sheet billowed and fell, and I rushed in to cover it with the laundry basket. Ron put the case of dog food over the basket to weigh it down, and we raced back toward the theatre filled with something like pride and happiness that made me feel giddy. My mud-soaked boots dripped and squished against the paved road where the occasional pools from the streetlamps felt brighter than sunshine.

At the end of the night, after the nature lady had come for the bird, we collected our supplies at the side of the road and returned them to the theatre. I was sleeping in a dorm room, and alone, later on, I kept thinking about what my actions might mean in terms of my own character. I rescued a bird in a swamp. I ruined my favorite pair of boots. I risked gators and snakes. Whatever I assumed about myself wasn’t true. I was a stranger.

In the morning I was a person who had rescued a bird. No longer bad. But what did it mean to be good? I decided that good people were allowed to belong. I wondered what I might belong to.

In the afternoon I called the rescue agency. “You did a good thing,”a woman with a

kinder voice said. “Her wing was badly broken, and we had to put her down. But she had a good death.”I thanked her.

Years later I took my son to the American Museum of Natural History in New York City where they have walls,floor to ceiling, filled with cases of birds. I asked my two year old, “which one is your friend?”He went straight to the yellow-crowned night heron and put his hands up to the glass. And this was a story I had not yet told.

Once I knew the bird had died, I walked out of the theatre building to the lake where the cormorants swam. I took off my wedding band. I sent the person who I’d thought I was to swim with those cormorants, and for as long as they stayed underwater, I did not watch or wait for her to resurface. She had a good death too.