The 30th of May, 1931. An unremarkable date. The British Raj is still lording over the Indian populace as revolts are cropping up all over the country. It is an unremarkable day in an unremarkable remote village of India. On the main road, cycles trill shrilly and overbalance into pedestrians. A cow on the footpath is chewing the lungi of the newspaperman established on the wayside. A radio teetering on the edge of his table blares out classical music between bursts of static. With every knock it receives, it emits a fresh outburst of indignant squawking. Adding to the cacophony, hawkers exalt the virtues of their wares with indiscernible yet hypnotic lyric, punctuating the sounds of the hot afternoon with their soprano cries. Every plant is parched and coated with a thick layer of dirt and grime. A similar layer of grime is building up inside the collar of a small boy standing at a shop, his whole being is concentrated on a man’s hands, as they pick up a stamp, apply glue to its back and press down firmly with a steady thump-thump staccato into an album. In a few minutes, the man smiles at the boy who grins happily and clutching the album, runs home to gloat over his treasure.

The 26th of January, 1951. It’s been a year since the country has been declared as a secular sovereign socialist democratic republic with its own written constitution. The little boy has grown into a young man with a son of his own. The baby is brought up in a free environment and encouraged to follow his dreams. The stamp album never leaves his side. It now contains not only postage stamps but also revenue stamps, local utility stamps, old currency notes, crumbling letters and first day covers. Protective to the extreme, the boy constantly fusses over it, adding, changing and lecturing his siblings on the ways of distant lands – lands that he has visited only in his imagination via his stamps.

The 15th of August, 1981. Television has made its foray into the land and perceptions of fakirs, elephants and snake charmers are being dispelled everywhere from the minds of the global citizens. New frontiers have opened up, new insights are available into the world and science has brought Man to the brink of the Information Age.

Into such an India I am born. As the firstborn daughter, I enjoy an enviable position in the family and am subject to huge amounts of pampering. I take to reading at an early age and churn out numerous stories with gusto. A literary career is predicted for me by the family astrologer. And the stamp album sees it all.

I am a pig-tailed nine-year-old in frocks when I first lay eyes on it. It is an ordinary book with no distinguishing feature save for its uneven bulk. I spy a corner sticking out from under a mound of paper and pull it out. With a soft whoosssh, several loose stamps cascade out from between its sheets and tumble onto the floor. I rescue them and squat down to investigate my discovery. The book has been divided into sections, many of which are only half filled. At a glance I can tell my grandfather’s old stamps from my dad’s newer ones. Excitement fills me. What a treasure! I am rich! Now I can buy all the dolls I want! To my dismay, only Indian stamps abound. Bah! What use are those? Everybody has them. I tuck the book away to explore at leisure. I turn the pages eagerly, hoping to come across some unusually shaped or colored ones, but am disappointed to see only square stamps. I shut the book and tuck it away in a suitcase, resolving to pore over it at leisure. Soon my family leaves the ancestral home for the promising new city of Bombay where prospects are better. The old album that contains stamps from all over the world, but has never traveled further than the local post office, sets forth and makes its first journey into the world outside. Settled in the metropolis several months later, I renew my acquaintance with the album. I decide to reorganize the album and keep a running tally of the number of stamps. I dunk the entire album into a tub of water and wait for the glue to dissolve so the stamps can float free. After fifteen minutes of chafing, I wrench out the remaining stamps and throw the album away. Many stamps get torn – a few slightly, others beyond recovery. But ignorant at the devastation I have caused, in my young world I am happy with what I have. I bind together some sheets of paper and make a new album. For a few days after this, I admire my handiwork regularly. Eventually life gets in the way of this pastime and the stamps fail to keep up my interest. 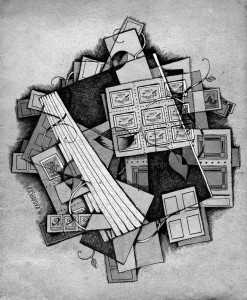 The 3rd of October, 1991. Computers are catching on in a big way and the Internet boom is round the corner. My grandfather, the creator of the old stamp album, passes away. I lose a great and trusted companion. By the time I next open the new album, I am studying hard for my examinations and trading stamps with my friends – their shiny new ones for my torn and smudged ones. I feel clever thinking I’ve got the better of the bargain, little realizing that I am actually handing away a part of precious history for the contemporary today. My album grows with additions of triangle-shaped stamps which become the pride of the collection I have now started calling my own. Gradually when they demand more storage space, the stamps are gathered into plastic bags and dumped together. As examinations take over, I attend to my stamps less and less often, until, in the novelty of making new friends at college, they – my oldest friends – are forgotten.

The 9th of December, 2001. Political boundaries are blurring and terrorism has become a true threat within the United States. The twin towers of the World Trade Center have been razed to the ground amidst a frenzy of fear. I get married and move to a different country and my stamps accompany me. I chance upon them accidentally and guilt motivates me to photograph and bag each stamp. After agonizing over days whether to sort them by location or content, I run out of patience and clear plastic bags. Back they all go into the bottom of the chest. Predictably, once out of sight, they are out of mind.

The 22nd of June, 2021. The future is here. Bright, hopeful and strong. My daughter has acquired the stamp album and has grand designs to re-structure it to showcase the stamps to best advantage. She sounds sensible and confident. I reflect upon the past, full of remorse about my actions. My irresponsible behavior has stamped me as a murderer. My inability to preserve my inheritance has resulted in the loss of a rich heritage. A considerable amount of love, care and sweat has been invested into these stamps. As my daughter prattles on, I glance at the stamps to beg forgiveness. They seem content at last.

Devyani writes on the humour and pathos of everyday life. Her fiction, nonfiction and art have appeared in numerous international magazines, including previous issues of Ducts. To enjoy more of Debora’s adventures, visit her website Verbolatry and sign up for her kickass free newsletter at devyaniborade.blogspot.com.

More from Author
Comments on “Confessions of a Stamp Murderer”
No comments yet. Be the first!