Editor’s note: The following prose poems were inspired by photos featured several historical placemats that were produced by the Weld Historical Society and discovered by author Ron Singer during his visits to Weld, Maine. This piece is particularly timely because this year, Weld (established in the year 1816) will proudly celebrate its bicentennial, holding several events to reflect on its 200 years of history. We would like to thank Sean Minear for providing high-quality copies of four photographs from the collection of the the Weld Historical Society; the fifth image is a photo of the original laminated placemat itself, as provided by Elizabeth Yamin. 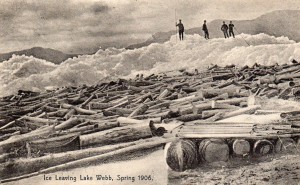 In this, the oldest photograph, we see a bateau, big raft, jumble of logs, and a fast-shrinking mass of cloudlike ice, on top of which stand four men, two with pike poles. The third man, hands in pockets, rests his weight on his right hip, and the fourth, in profile, looks back toward the mountains. These last two could just as well have been spectators as log drivers, since the Ice Out was—is—a big event. With foreground raft, bateau and logs, then ice, men, mountains, sky, this tableau welcomes us to Weld Township, in western Maine.

In contrast to “Ice Leaving Lake Webb,” the other placemat photographs are set within the confines of the hamlet of Weld, just off the southeastern corner of the lake. All four photos depict buildings along a road that passes through the crossroads, then winds steeply up out of town. 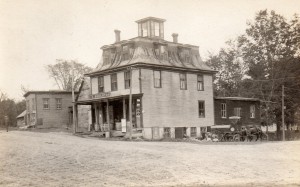 A formidable pile at the crossroads, just down the road from Mary’s Beauty Shoppe, Houghton’s has witnessed turnover galore: gift shops, groceries, computers, whatnots—including the United States Resettlement Administration Land Utilization Project (USRA), which mouthful bought out, during the Depression, almost all of the farmers of Weld Township. In 1938, the USRA granted a ninety-nine year lease to the State of Maine to convert the farmland into Mount Blue State Park. This lease expires in 2037, not so long from now!

Houghton’s is a freestanding, two-story frame building, foursquare, weathered, nautical (though far from the sea), and boasting a single cupola, mansard roof, five barrels, a bunch of signs on the porch, a barn to our left, a dark, attached shed in back, and, on the right, a small, obscure figure kneeling behind a horse-drawn kerosene-delivery truck. 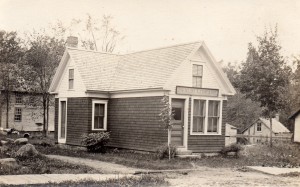 In 1905, when the Free Public Library was first organized, Weld was the smallest municipality in Maine to boast such an institution. At age ten, it sat for this portrait, and about two decades later, moved to its present brick home, just a stone’s throw (if you have a good arm) from the crossroads. Shockingly, perhaps, the collection today may be smaller than it was a century ago.

Notable features of this wood building include white trim around the dark doors (two) and windows (five), a steep, cross-gabled roof, a second story, also white, a porcelain doorknob, and an illegible sign. Two cement steps lead down onto the lawn—flowers, too, but no path out to the road.

To the rear of the library, on our left, stand two young trees that partly screen a home with twelve-paned windows, common in those days. The lawn beside the library is pocked with large stones, left there for decoration, too heavy to move, or just abandoned.

On the other side, down in a hollow and easily missed, is a gray building with a double line that looks, improbably, like a guard rail, as well as two trees, plus something else I can’t identify. To hazard a wild guess . . . a lacrosse stick? 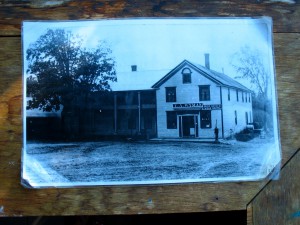 Wyman’s is a large, three-part, two-story building. The two parts on our left are in shadow. The long central part has a porch, latticed balcony, six or eight windows, gleaming metal roof, and three slender posts joining porch to roof. From behind the ridge of the roof peeps a chimney stump, framed against the sky. I’d say this third of the building was used to store goods in quantity, such as cans or jars—or just to stockpile junk. Yet the windows are curtained, suggesting human habitation.

The left part of the building veers off from the central one at an obtuse angle, truncated by the edge of the photograph. Although its roof, too, gleams in the sun, this part is obscured, at first glance barely visible. To guess again, was it the barn or shed?

The right-most third of the building, perpendicular to the others, and stretching a long way back, is a white frame structure comprising the general store, an upstairs apartment, and a small room hunched beneath the roof. Owing to the light and to its suggestion of active use, this part of the building is a focal point of the photograph. Features include a chimney and stovepipe, thirteen assorted windows, and, out front, a kerosene pump shaped like an upright vacuum cleaner or carpet sweeper. Against the freestanding wall leans a bike (kickstands were still decades away), and, further back, half a dozen barrels. The building dwarfs both bike and barrels.

The signage for the store is elaborate: over the entrance, “T.A. Wyman,” large, and next to it, small, “Post Office, Weld, Maine.” A notice (illegible) is posted on the door, another (also illegible), on a window between door and pump.

T.A. did not go in for landscaping. Aside from two trees, one lush, one spindly, all we see out front is dirt, and more dirt, marked by the narrow tracks made by the auto and truck tires of those days. Impossible to say where the “yard” gives way to the road.

By now, Wyman’s is the Weld General Store. In recent decades, the building’s mid-section sported a big, lovely, framed wooden chart of the surrounding mountains, but the chart has rotted away and been removed, along with most of the facade. Sometime between Wyman’s and the General Store, one entrepreneur, “Newt,” tripled the previous inventory. Catty-cornered from Houghton’s, this building is said to be the oldest two-story frame structure in Weld. 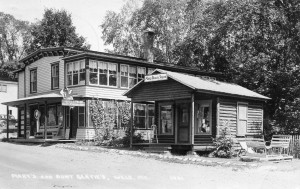 Two white crumbs, one in a tree canopy, the other just below a chimney cap, dot this, the most recent, photograph, in which we see a gas station with two Martian pumps; a car with fenders like fat thighs; a two-story clapboard house, “Bertie and Trask, Little Candy Store” (with a big penny scale on the porch); and a planed cabin, “Mary’s Beauty Shoppe,” dark, whereas “Bertie and Trask” is gray, the gas station, white.

These three establishments stand beside the road leading up out of town from the crossroads. If the photograph had extended further to the right, Houghton’s could have been included.

Today, the Mount Blue Garage is the only place in Weld where you can buy gas and have your  vehicle serviced. Someone named Perry Rhodenizer started the garage in 1935, on the site of the Stinson-Masterman Grist Mill and Meat Shop. Mike Vining, the present owner, is a friend of ours. No other Rhodenizers appear in the history of Weld, but Vinings go back to the Civil War, and, perhaps, beyond.

As for the “crumbs,” I tried to wipe them off, but they proved to be dust in the photo. No more than dancer from dance, art from life, can you tell the placemat from the supper.

Each summer, my wife and I spend four to five weeks just outside the hamlet of Weld. When we return home to Manhattan, the crowds and noise are stunning. If we happen to mention “Weld” to New Yorkers, some think we mean “Wells,” a better-known resort town on the coast.

The population of Weld—the township, that is—declined from its peak of 1,130 in 1870 to around 950 in 1915, to 419 in 2010 (dwarfed by the summer population of 3,000 plus). Since the 419 are spread over 54 square miles, it does not seem fanciful to imagine that the number of pedestrians waiting for the light to change on a street corner in Manhattan, at almost any time of day, could exceed the entire year-round population of the hamlet proper.

Not to mention traffic. In 1915, the total number of automobiles in the township was fifteen, which would take only a few seconds to whiz past our corner. The almost total absence of cars and people from these five photographs is striking, as if the place had been hit by a neutron bomb. Only one automobile has found its way onto a placemat, and other than the four men working the river, and the small figure behind the horse-drawn kerosene truck, the number of people is zero.

Perhaps, this absence can be explained by the culture of the hamlet during the first half of the 20th century. Were these earlier denizens of Weld anti-selfies? Contrast, however, the photos of everyday Weld in 1910, 1915, and the 1940s, with one from the centennial in 1916, which depicts more than a dozen autos, scores of dressed-up people milling around the crossroads, and a band, poised to play.

These photographers, it seems, kept their powder dry for the big public occasions—like centennials. The 1916 photo could almost have been an earlier version of our Manhattan street corner! And come next year, you can bet that the Weld bicentennial will be recorded by multiple state-of-the-art webcams, in living color and surround sound.

Automobile figures, building info, and other facts are taken from a booklet, Weld Sesquicentennial 1816-1966, History and Program (Weld Historical Society, 1966). The 2010 census figure comes from weld.org, and a few incidental facts (like the advent of kickstands), from Wikipedia.

Ron’s poetry has appeared in alba, Borderlands: The Texas Poetry Review, The Brooklyn Rail, Evergreen Review, Grey Sparrow, The Hampden-Sydney Poetry Review, and Word Riot. His nonfiction has appeared in Bulletin of the Atomic Scientists, Evergreen Review, The Georgia Review, opendemocracy, Pambazuka News, and The Wall Street Journal. Ron’s seventh book, a collection of Maine poems, Look to Mountains, Look to Sea (River Otter Press, 2013) was nominated for a Pushcart Prize and named Editor’s Chap/Book Choice for Spring/Summer 2014, by The Aurorean. His eighth book, Uhuru Revisited: Interviews with Pro-Democracy Leaders (Africa World Press/Red Sea Press, 2015) can be found in about 100 libraries across the U.S., and beyond. More at www.ronsinger.net.

More from Author
1 comment on “Prose Poems with Placemats”

Martin Grohman
Very interesting stuff, thanks for doing it. Was looking for history of Perry Rhodenizer.