The following excerpt is from the novel, That Man in Our Lives. This scene comes from Part II of the novel and recounts the first time lifelong friends Larry Woo and Gordon (Gordie) Ashberry meet. See end of excerpt for more info and links to the international and US publishers. 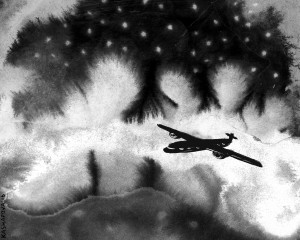 I met Gordie on board a Pan Am flight in the summer of ’66.  It was my first time on a plane and I was scared.  Not that I’d admit this to my parents, since it had taken the entire three years at Chinese U while finishing my BA to convince them to let me go study in the States.  Luckily, they respected Frank Carter, my American professor who helped me get a fellowship at NYU.

I was staring out the window, trying to wave to my family who had monopolized one corner of Kai Tak’s raised outdoor lookout, trying to fight the nausea and trepidation, when Gordie crashed into the seat next to mine.  He was complaining to the air hostess, an older woman with a beehive so stiffly sprayed you could balance an egg on its crest.

“But Dad flies for Pacific American.  I always ride up front.”

“Perhaps on Pacific,” she smiled.  “Not with us.”  Her tone was condescending and final.  It was one of the few times I ever witnessed Gordie failing to charm a woman.

“Goddammit,” he muttered as she walked away.

We stared at each other.  What with my unease, the newness of everything, I blurted out what, in retrospect, was a pretty odd question.  “Are you American?”

“Because I need to make some American friends.”

He looked at me like I was nuts, but something made me barrel right on.  “Do you live in New York?”

“And do you listen to jazz?”

That was how our friendship began.  He was eighteen, headed to Yale as a freshman and I was twenty-one, a virgin, and a jazz head.  You understand, of course, how weird this made me back home, the jazz part I mean.  My family didn’t understand that, anymore than they understood my desire to major in American Studies, having completed a BA in a mish mash of languages and modern Chinese history.  My oldest brother entered government after reading philosophy at Hong Kong U (he was the smart one), my second brother helped run the family fish business, and my sister became a primary school music teacher.  With three respectable siblings, one weird child my parents could almost tolerate.  Besides, being the baby, as my sister says even now, I get away with suicide, if not murder.

Of course, we did not talk of this during the flight, but of everything else under the stars.

About an hour before landing—we hadn’t slept at all, having talked continuously about all the jazz and life that mattered—Gordie showed me his newly coined Chinese name, and said he was going to major in Chinese.

“You sound like my mother.  She thinks I’m crazy to study Chinese.”

“Not that, I meant your name.  Ya Gao-daan is synthetically phonetic in Mandarin, but sounds terrible in Cantonese.”

“My dad’s buddy, Jimmy Kho, gave it to me.  He speaks better Cantonese than Mandarin, I think.  But I’m not sure.”

Gordie laughed.  “So can you give me another name?  I gotta have a Chinese name, right?”

I ruminated a moment.  Then, I wrote two characters.  灰果

“The first character is ‘ash’ although it can also mean the color gray.  So that’s appropriate because it’s the first syllable of your name, and your eyes are gray.”

“Hazel,” Gordie corrected, “according to Mother.  That’s almost like a gray, but they’re green, according to my license.”

“Okay, that works more or less.  So hui or fui in Cantonese.  Then, guo or gwo means fruit, but is also like the genus for berry, I think.  But the sound is like the first syllable of your Christian name.  It’s also almost a homonym for ‘nation’ which elevates its possibilities.”

Being young, I was impressed by my own brilliance and pleased that Gordie seemed taken by what I said, because he listened attentively.  This was long before anyone was forced to listen to me, before I taught and lectured sleepy undergrads.

I continued.  “That fulfills both criteria of a properly constructed name for a foreigner.  It resembles the sound of your origins, yet also has a relevant Chinese identity and meaning.  The art of naming in Chinese is a balance of beauty and meaning.”

He nodded slowly.  “But that’s only two characters.  I thought Chinese names were always three, like the one Uncle Jimmy gave me.”

“No, many use two, and some even have four.  We’re negotiable.”

Want to read more? The full novel is now available from C&R Press at http://www.crpress.org/. Or, for more information on the forthcoming US edition, visit http://mongrelintl.wix.com/xuxitmil.

Novel synopsis: This tale of lifelong friendships features Gordon (Gordie) Ashberry, a wealthy, dilettante Sinologist – a.k.a. Gord or Hui Guo (灰果) to his two closest friends Harold Haight and Larry Woo – a character in three of Xu’s earlier novels. The story opens in March 2003 when Gordie deliberately disappears during a flight delay in Tokyo. The pre and post fallout around that disappearance informs this drama about the friend who was always around in your and your family’s lives until he isn’t, and how much or little we know of those we think we know well. Originally inspired by John Adam’s opera “Nixon in China,” a large cast of characters traverses the globe in search of this missing protagonist, a Gatsby-ish figure with Chinese characteristics. That Man in Our Lives is Xu’s metafictional response to the Chinese classic novel Dreams of Red Chambers by Cao Xueqin.

More from Illustrator
About the Author
Xu Xi (許素細)
Share:

Xu is the author of ten books, most recently the novels That Man In Our Lives(C&R Press, May 2016 and forthcoming in the US in September 2016) and Habit of a Foreign Sky (Haven Books, 2010), a finalist for the Man Asian Literary Prize; the story collection Access Thirteen Tales (Signal 8 Press, 2011). Forthcoming books include Interruptions (Hong Kong University Museum & Art Gallery, September, 2016), a collaborative ekphrastic essay collection in conversation with photography by David Clarke; a memoir Elegy for HK (Penguin China/Australia, 2017) and Insignificance: Stories of Hong Kong (Signal 8 Press, 2018). She has also edited four anthologies of Hong Kong writing in English. From January to May 2016, she was Distinguished Visiting Writer-in-Residence at Arizona State University’s Virginia G. Piper Center of Creative Writing. She is also co-founder, with author Robin Hemley, of Authors At Large, www.aalauthors.com, offering international writing retreats and workshops. A Chinese-Indonesian native of Hong Kong and a US citizen, she currently lives between New York and Hong Kong. Follow her on Twitter, Facebook, and Instagram @xuxiwriter and visit her at www.xuxiwriter.com.

More from Author
Comments on “That Man in Our Lives: A Novel Excerpt”
No comments yet. Be the first!