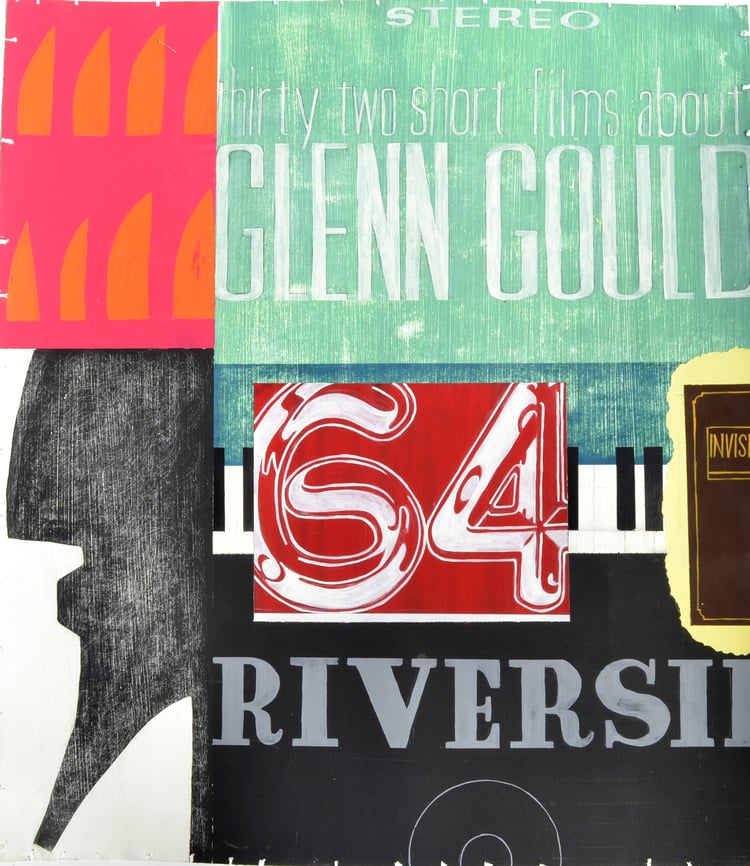 Listen to Sitcom Song by Leron Thomas on YouTube.

You can also read more about Tierney’s art and Leron Thomas.

The family puts on a Thanksgiving play in the backyard and Greg films it with his GoPro, but Cindy refuses to participate because Native Americans were not treated fairly by the colonists. Bobby dresses up in a Native American costume and Carol and Mike ground him for cultural appropriation. When a gas pipeline is planned for their neighborhood, Bobby sneaks out at night in the costume and the pipeline workers become convinced he is a ghost angry they are disturbing a burial ground and the pipeline is cancelled. The family pats Bobby on the back for his swift thinking.

A huge cell phone bill prompts Mike to seize everyone’s cell phones and install a payphone in the family room. No one knows how to use a rotary dial or has any change, so nobody can make calls. Also no one will answer it when it rings because they don’t know who it is. Peter takes matters into his own hands and hacks into the next-door neighbor’s VOIP account. When he dials into the Brady voice mailbox he gets a message from a talent agent who wanted to book the family on a TV show two days ago. Everyone is upset that they missed it and instead set up their own YouTube channel, earning enough to pay off the cell phone bill and get their phones back.

Greg and Marcia run against each other for class president and Marcia accuses Greg of spreading fake news about her. Greg retaliates by hacking Marcia’s texts and emailing them to the whole school. Marcia really set those texts up as decoys and they actually make Greg look bad because they include the Anthony Weiner-like photos he has been texting to Cindy’s friends. The pair make up and hold a press conference at school where Greg concedes as Marcia stands next to him looking uncomfortable.

Mike and Carol leave Marcia and Greg in charge while they go out to dinner with the black couple next door. They sneak back to check on the kids but set off the alarm system and the police arrive. The neighboring husband is shot while lying on the ground with his hands up, but makes a swift recovery and the family raises money for the Black and White Ball to improve race relations. The Bradys receive a bill from the police department for the 15th false alarm on their system that month.

The family goes camping in the Grand Canyon. When they are stranded in a ghost town, they start a signal fire, which sets off a wildfire. While scrambling for higher ground away from the fire, Bobby leans against a famous balanced boulder, which comes loose and tumbles down the hill, crushing the family’s car and knocking down a dam, which creates a flood that puts the fire out. Mike is interviewed by a reporter later and explains that this all proves global warming is not real.

The Bradys go on a family trip to Hawaii in a special two-part episode. While there, the boys decide to go on the hunt for Obama’s long-form birth certificate. The girls argue that it’s already been released but the boys believe that is fake news. The boys think they’ve found it but the document is lost by a bicycle messenger person. The girls are bitten by mosquitoes and contract Zika. This is a problem since Marcia is having a pregnancy scare but fortunately it is a false alarm. Meanwhile Peter steals a tiki glass from the resort bar because he believes anything that is poured in it becomes a magic potion.  After too many glasses of iced cappuccino with Kahlua, Peter is hospitalized with alcohol poisoning. Everyone recovers and the family flies home after a giant luau.

To get them to vote her in as Most Popular Girl in school, Jan makes outrageous promises to all of her friends, including promising to build a wall on the school property to segregate the whites from the Hispanics. When she wins the vote, she tweets that she never promised those things and that she’s accomplished more than anyone else in the role. Jan becomes addicted to tweeting day and night, calling people #sad and #failing. Mike and Carol turn off her Twitter account and she returns to her senses, but secretly gets hooked on SnapChat.

Alice goes away on a vacation and her cousin Sandy comes to stay. The family becomes convinced Alice is actually away transitioning to a man and plans a party to welcome her home as “Alvin.” Bobby posts a sign on the kids’ bathroom door banning Alvin from entering. Carol says she will boycott putting toilet paper in that bathroom until Bobby comes to his senses. Alice returns from her vacation still as Alice and Sandy reveals she herself transitioned from male to female years ago, while the Bradys create a gender-neutral bathroom for all to use.

More from Illustrator
About the Author
Brette Sember
Share:

Brette Sember is the author of more than 40 books and is a freelancer, indexer, and content provider. She grew up in the 70s with only three TV channels and can recite the plots of most shows from the time period with ease. Her web site is www.BrettteSember.com.

More from Author
Comments on “Classic Brady Bunch Episodes If Made Today”
No comments yet. Be the first!