I figured by the time I turned 40, I’d know about love. Instead, I washed up on the shores of my still-married parents’ basement, scrambling around in a post-divorce haze, searching for their wedding photos. 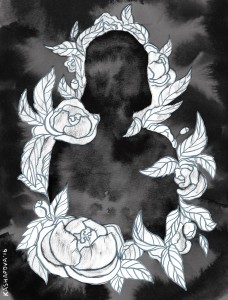 Growing up I thumbed through the pictures often, trying to understand where their love went wrong. Now I wanted to know what they’d done right.

I asked Mom where to find the photographs. “Oh, I don’t know,” she replied, on to the next, more interesting thought. I’d just jettisoned the detritus of my married life, but I knew right where my wedding pictures were.

“Mary!” my dad yelled in frustration as he stormed into the room, interrupting to ask Mom to help him find something before he left for work. Him, she jumped up and helped. Just like high school, when I’d vowed to escape.

Along with Dad’s impatience, I inherited his blonde hair and blue eyes. Mom, with her shock of black hair, dark eyes, and sharp cheekbones, was a world unto herself. She wore big hats, leopard prints, and left bright red kisses on her cigarette ends. She wasn’t like other moms. “I wish I never had children,” she occasionally let slip.

That hurt, but also made me wonder what her life could’ve been like without us—Margaret Bourke White’s? Nancy Drew’s? Marlo Thomas’? Or better yet, what my life would be like.

I did not, nor was I encouraged to dream about becoming a wife or mother. My vision was to earn enough to keep two apartments, one for Mom, and another where my sister and I could live. Dad could fend for himself.

Despite that he was a metallurgical engineer, Dad had moved our family on a near-annual basis, going from one rust-belt suburb to the next. Mom never liked suburbia, or, as she called it, “Hell without the amenity of sidewalks.”

The moves stopped outside Pittsburgh, when Dad left steel to buy a health club. In hindsight he might seem a man ahead of his time, but we thought he was nuts.

I can still see Mom, now in an ill-fitting work t-shirt and jeans. “Your father knew I didn’t like to exercise when he met me,” she said, before taking a deep drag on her Kent king.

Their fights were private but not unknown to us. “Heat this for dinner,” became a common Mom refrain. “I have to go to The Club because your father can’t figure out payroll. Again.”

“Why don’t you just leave him?” I started asking, my escape fantasies having overtaken my savior role.

I couldn’t imagine being trapped like that, I certainly never imagined I’d relate.

I racked up a career, a house, and enough good friends to feel dependence-proof when I met the man who would become my husband—a journalist with a love of travel. Our taste in books and music and all things arty was in synch. When my other half expressed a vague interest in reporting from the Muslim world, I saw the possibility as a much-needed stepping-stone in his career. This was nothing like my mother traipsing after my father, I took the job that got us there.

Nonetheless I did get stuck, albeit in a different way. It took me a year to get out of Qatar after my beloved blindsided me by ending our marriage over the phone. From another country.

Finally I found those wedding pictures, and noticed something I’d not seen before. Scratched into the corner of each was the word “proof.” Apparently they’d never bothered to get prints.

I wanted to reach a conclusion about the ephemeral nature of love, but could only deduce that there was in fact no erasing it. Love was the magic of fingertips whispering, yes, but also the alchemy of forgiving a partner who fails to put together the wedding album, or learn their payroll system, or who may be happy as an alt-newsweekly journalist. My expectations were the trap.

Then life, like love, showed us its way of marching on without regard for collateral damage. Shortly after I returned from the Persian Gulf but long since she’d quit smoking, Mom was diagnosed with end-stage cancer. Dad, who previously couldn’t find a spoon in his own kitchen, took to waiting on Mom like a baby bird. Once I tried to hand her a cup of tea he’d prepared, only to watch him march a wide circle around me to hand it over himself. I resolved to call her every day until the end.

Perhaps not surprisingly, Mom seemed to like the attention that came with the diagnosis. Am in ER again. Love, Mom. Went her first text, a long-form affair with numbers for letters on a flip phone. At 66, she got on social media.

She lived another seven years.

In that time, we did speak most days, and I had the chance to practice releasing expectations. When she got to hospice, I thought we should be planning her service, but my parents refused. Dad told the nurse he was going to put her on a vegan diet when she got home. Mom’s last Facebook post was a cheerful announcement that she had only two more rounds of chemo to go. Eighteen days later, she would be gone.

When I sought out those wedding photos again, this time I found the actual album, in pristine condition. Of all the things lost along the way, Mom knew what was worth safekeeping, and how to make sure it was found when we needed it most.

More from Illustrator
About the Author
Lisa L. Kirchner
Share:

Lisa, is a former Ducts memoirs editor and the producer and host of New York’s only reading and improv series, The Next Chapter. Her work has appeared in The Washington Post, Salon.com, BUST Magazine, The New York Post, Budget Travel, Kirkus Reviews and Huffington Post, among numerous others. Before moving to the Persian Gulf, she was the religion editor for Pittsburgh’s gay and lesbian newspaper, the bridal editor for its society rag, and an alt newsweekly dating columnist. Her flash essay, “My Husband: My Moto,” appeared in the compilation Learning to Love You More (Prestel Publishing, 2007). Her solo show, CRANKY WHITE GIRL IN QATAR, is the basis for her memoir, Hello American Lady Creature. She currently lives in New York City. More at www.LisaLKirchner.com.

More from Author
Comments on “A Thousand Words”
No comments yet. Be the first!