How To Find Your Son and Save Him From Bears and Machete-Wielding Zombies
Alice Graves | Best of Ducts, Memoirs | Issue 38: Winter 2017
Share:

This is how you find your son who was hitchhiking home for spring break to surprise you and now he calls you because he and two friends are stranded in a deserted place called Pine Island and it’s getting dark. They were going to spend the night camping on the beach but they found the gate locked and the area totally deserted. Now they are eager for the shelter of your house.

Cram your feet into your sandals and grab your car keys and your husband.

Do not take the time to look up Pine Island on Google maps. You’re a mother; you’ll find it.

Note that it is nearly eight p.m. on a Sunday.

Call your son’s cell phone to tell him you are on your way. Ask him what landmarks are nearby. Any stores or other buildings? Street signs?

Hear him tell you there are no streets, no buildings, only trees.

Drive past towns you know, and finally, after about an hour, see the sign that says you are entering Hernando County.

All you know is that Pine Island is in Hernando Beach. This must be a popular spot, like Disney, with lots of signage. Don’t despair that it is dark now.

When you see the sign for Hernando Beach, turn left, toward the gulf.

Note that although the highway that brought you this far was well-lit and lined with strip malls and neon, this road is narrow and hugged by lush trees standing tall and black against a clear starry sky. Except for the moon, there is no lighting. Thank goodness for the moon.

Be on the lookout for zombies running out of the trees swinging machetes. This would be a perfect place for them.

Think about writing a screenplay for a slasher movie that takes place on this very road.

Hope that no bears or alligators come running out of the trees and attack you.

Recall a scene in “The Wizard of Oz” where the trees come to life and are really, really scary.

Call your son’s cell phone again to reassure him that you are closing in. Listen as he tells you that his battery is running low. He reminds you, in almost a desperate voice, that there are no streets or landmarks, only trees.

Muse that when he was little he thought more than one tree was “treeses.” When you corrected him, he asked, “then why do we say houses?”

Keep driving on the road that reeks of eeriness and seems to go nowhere. It doesn’t curve; it is flat and straight. This is Florida. Breathe the damp, cool air. Frankly, you are scared, but you must find your son. Even though he is 21 and will graduate in two months, he is still your child and you feel a profound, primal impulse to protect him.

Find a roadside bar and pull up. Inside is a bartender and two patrons. All three are women, all are engulfed in smoke and bathing in that smell of rancid beer that you remember from college bars. This tableau reminds you of a country song. No particular country song, just a generic country song about sad people in a bar on a Sunday night. 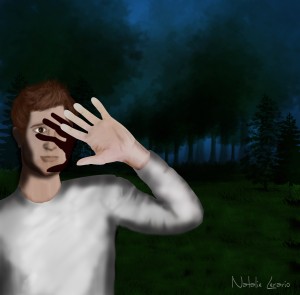 Make a mental note to write a country song about a woman in a bar on a Sunday night in a dark, damp place with no buildings, only trees. Maybe she has a white line on her finger where a wedding band used to be. Maybe add bears or zombies bearing machetes.

Ask for directions to Pine Island. “There are two Pine Islands,” says the bartender. “Which one are you looking for?”

“It’s closed now,” says another one of the women, the red-haired one nursing a bottle of Bud Light. “Closes at sunset.” The two others nod. You explain the situation. Maybe they are mothers and will understand.

Tell them you want the one with the closed gate. It turns out you’re going in the right direction. Just keep going, they all agree. But none of them can say how far it is.

Get back in your car and call your son. This time he is irritated. His battery is dying, please stop calling his cell phone! You are too frazzled and lost to argue, so you tell him that you will honk your horn as you approach.

Here is another bar. This one is larger, there’s music and more than two cars parked outside. You go up the stairs (the place is on stilts) and ask the young cute waitress about Pine Island, assuring her that you know there are two. She knows exactly the place you want, and you are close. Very close.

Get back in the car.

Recount to your husband the time you and your friend hitched a ride home after a concert and two cute guys picked you up. They drove to a nearby park that had a lake as well as a lot of trees, and the four of you sat by the lake and then explored the treed area and you were sure this is where the guys were going to dump your bodies. It turns out everyone got bored, the guys drove you and your friend home, and never even tried to kiss you.

You laugh now, but realize that night could have ended differently.

Make the turn the young, cute waitress told you to make. Start honking your horn in intervals, shattering the stillness of the night.

Hope that you do not wake up the bears.

Watch the road for sleeping alligators.

Sigh and wish you were home in your nightgown watching TV with your cat.

Hope that your son and his friends have not been eaten by rabid deer.

Hope that your son and his friends have not been attacked by flesh-eating trees.

The darkness and remoteness of this place are what you will remember of this night for many years.

You will also remember that first bar, how lonely it was.

Finally, you barely make out three silhouettes on the side of the road. It’s your son and his friends and their huge backpacks! They are glad to see you, but they comment that you didn’t have to keep honking so much.

Ignore the second part of what they just said.

Hug your son and his friends.

Wait as they squeeze their backpacks and then themselves into the back seat for the drive home.

Notice that the roads are less scary going home, and the way seems shorter.

Listen as the kids tell you how they wanted to sleep on the beach under the stars. They were going to scale to locked gate, but one of your son’s friends cautioned against it.

Finally, when you are back on the main highway and you pass a sign for Clearwater and know you’ll be home in under an hour, one of your son’s friends says, “Clearwater. That’s where my parents live.”

Refrain from asking why the fuck he didn’t call them instead since they live way closer. Be secretly glad the kids chose you over them.

Arrive home at midnight, tell the kids to have something to eat and go up to bed. You have to work in the morning.