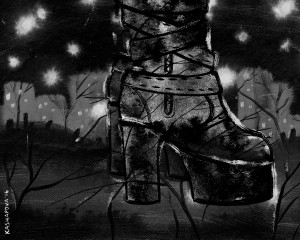 When I moved to St. Pete from New York City about seven years ago, my first friend was my bartender.

I frequented a bar on Central Avenue, Beak’s. It drew a mostly gay male crowd. Strands of Christmas lights hung year-round, and colorful kitschy posters plastered the walls. The bar has changed names twice since then, but it will always be Beak’s to me. That’s where I met Ryan, the bartender, who turned out to be straight.

Ryan lived on his boat in the marina, and when he got off work we’d move on to the Emerald, hit on women, and then crash on his boat. Sometimes two of his buddies would join us.

Mike was an ex-Navy cook, about 15 years older than the rest of us, with two teen boys. The youngest was obsessed with wrestling while the oldest smoked a lot of weed and was frequently arrested. We’d close down the bars every night, but Mike often went home before midnight. “I’m an old man,” he’d tell us.

Enrique had a twenty-sided die tattoo on his calf and he would show it off to women at the bars, thinking he could pick them up by talking about Dungeons & Dragons. Whenever he wasn’t there – and often when he was – we’d warn each other, “Don’t be an Enrique tonight. You never want to be an Enrique.”

None of us was very good at dating. Women came and went in our lives, including, briefly, Mara.

On Christmas night, Mike and Enrique had families to spend time with. Ryan and I found ourselves at the Emerald. The wood paneling reeked of cigarette smoke from decades before. They only accepted cash, and used an antique register. Our elbows fit easily into the bar’s well-worn grooves left behind by previous drunks. It was home.

Every half hour or so I’d wander up to the bar, order a shot, telling the bartenders, “Surprise me. Give me anything you want. Just make it vegan.”

While waiting for my shot on one of these occasions, I swiveled around on my barstool and found myself facing the girl seated to my right.

As my seat came to a stop, I gave her a goofy grin followed by a big hello. It’s still a surprisingly effective pick-up line.

“You have beautiful eyes,” she told me.

She out pick-up lined me. Unheard of.

Mara told me she was half Dominican and half Puerto Rican and that she didn’t know which part made her crazier. I barely heard a word she said; all I could think was, “Gosh, you’re pretty.”

She kissed me goodnight and gave me her phone number.

In the months to follow, I learned Mara had a son, Leo, just over a year old. She had split with his father just after he was born.

She’d invite me over on the weekends her son spent with his dad. She lived in a rundown studio apartment at the center of town near Mirror Lake. Leo slept in the living room while Mara slept on a stained mattress on the floor in what was essentially a closet. I pretended not to notice as roaches crawled across her walls.

She dressed all in black, always wearing shitkicker boots with high, thick heels. Once she met my friends and me at the Emerald and told us about how she’d beaten up a girl who looked at her the wrong way in a parking lot earlier that day. Nonchalantly. No big deal.

But she was pretty.

Mara studied mortuary science at St. Petersburg College. One Saturday night I picked her up after she went to a Rocky Horror performance at the old Beach Theatre. She stayed at my place and we watched “30 Rock” all night. “You remind me so much of a drunk Liz Lemon,” she told me. I took it as a compliment.

I drove her home the next day. On the way there she asked if we could stop at the cemetery on 58th Street. We walked around it and she told me she liked to search cemeteries for her mother’s grave. She never met her mother, she explained, and was raised by family friends. She always hoped she might stumble upon some sign that her mother had been long dead.

She was close with the two sons of the family that raised her. She called them brothers. We visited Jay, one of the brothers, after the cemetery and it was clear he was in love with her. I wouldn’t have been surprised if the other brother was as well.

That night I texted her to say that I’d had a nice time over the weekend. She texted back to say that I’d accidentally walked on a covered grave earlier in the day and that the spirits weren’t happy. She promised she’d try to smooth things over with them for me. “That would mean a lot,” I said. “I’d really appreciate it.”

A few weeks later she texted to say was getting back together with her ex. They were going to rent a house away from downtown St. Pete. They’d have a yard and a dog. “Leo would love a dog,” she said.

Eventually I stopped going out as much. I started dating someone. We got engaged. I moved to the suburbs. My journalism career was thriving. I forgot about Mara and life downtown.

About a year later I saw her sitting on a bench, alone, outside the Emerald. She was catatonic and obviously high. I called out her name. Nothing. I walked up to her, waved my hand in front of her face. Nothing. I offered her a ride home. Nothing.

One spring Saturday I had an interview downtown on Central Avenue. I stayed to finish my beer after my subject left. As I cashed out, Jay sidled up next to me, the Jay, who had once loved Mara in a less than brotherly way. “Well look who it is,” he said. “You’re slumming it to hang out with us downtown folks, aren’t you?”

I asked how he’d been. He was about to take an out-of-town job on an oil rig, he said, though he wasn’t sure if he wanted to leave just yet.

He apologized for how things ended with Mara. “Sometimes things just don’t work out between people,” he said.

I shrugged and asked how she was.

I guess there’s a time in everyone’s life when someone they once saw naked dies.

“Dead? What the fuck happened?”

He shrugged. “Last I heard she was living in Pennsylvania and jumped off a building. I don’t know though. I hadn’t heard from her in a few years. Shit happens.”

I asked how her son was doing and he gave me a quizzical look.

“Leo? Leo died a few months before she met you.”

“But…she talked about him as though he were alive. Her apartment was full of baby toys and furniture and clothes.”

More from Illustrator
About the Author
Tiffany Razzano
Share:

Tiffany is a journalist living in the Tampa Bay area. She’s an editor at Tampa Bay Newspapers and also writes for Publishers Weekly, Creative Loafing and La Gaceta. Originally from New York, she’s the founder of Wordier Than Thou, a literary arts organization in Florida that produces events for writers and readers. She’s opening a bookstore and literary arts gallery this summer. For more information, visit www.wordierthanthou.com.