That morning we were supposed to hear the heartbeat. Instead, the day clattered on without any regard for grief. I heard the phone ring, heard the dog whimper at the doorbell, heard the elderly neighbor grouse at the mailman. I heard the car mechanic say our car needed $2500 of repairs. My husband Art and I remained quiet.

Then the boys walked in, and I heard the sounds of salvation: a trip to Dave & Buster’s, a sleepover. These boys, 9-year-old Charlie Joe and 8-year-old Desmond, the children of two good friends, would be my rescue. Some women who struggle with infertility are put off by other people’s children, but I’m not.

Barely three weeks had passed since my miscarriage, and the ultrasound appointment originally scheduled for that day was now moot. These kids had no idea they’d walked into a home hushed by disappointment, no idea that my husband and I were mute with sorrow, no idea how much they could help.

Throwing down their overnight bags, the boys began shuffling UNO cards, a quick warm-up before the high stakes betting at Dave & Buster’s. I thought this would be Charlie Joe’s first visit to the arcade mecca, but he corrected me: “Technically, it’s my second time. The first time I was in my mother’s stomach. I didn’t even have eyes.”

Soon after the boys arrived, Art was due at his quarterly poker game. Despite the earlier prognosis, the car remained drivable. Until he decided to go to poker. He heard the sound of the engine trying to catch, and then silence.

I offered him my car. I’d borrow one from my mom. She wasn’t home.

Looking at my sweet husband with his cigars and six pack in hand, I offered my car again. He had to go to poker. I would borrow a car from Desmond’s mom. Jen dropped off her wheels and all was well. Until I realized that my wallet was in my car, which Art was now driving down Highway 279.

How would I fund our pinball and cheese sticks?

I remembered the extra credit card I keep separate from my wallet.

I searched through cat food coupons, punch cards, and receipts until I found a MasterCard. We were on the road as soon as I had helped both boys fasten their seatbelts. (If neither could buckle himself in, what were the chances they’d be able to accurately shoot zombies?) I leaned over Charlie Joe and jammed his belt in the latch. He looked up and said that this was a little awkward.

If only he knew. With one lone credit card and a borrowed Honda, we drove to the Waterfront plaza. Thousands of teenagers with iPhones and neon high tops poured into Dave & Buster’s, as a loudspeaker warned us that NO ONE under 21 would be permitted after 10 pm.

Desmond looked at me somberly. We only have three hours.

I assured them this would be enough time to play Whack A Mole, wager on horse races, and pummel each other in air hockey. With one exception. My credit card was expired.

I could have checked this number on the face of the card before leaving. I could have borrowed money from Jen before hauling across town. Instead, wanting so badly to come through on my promise to the boys, I’d clamped on to something I thought would work, and put my foot to the metal. 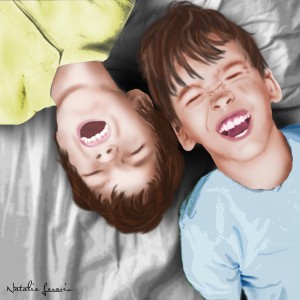 I stood in the rush of the crowd, penniless, feeling alone. I thought of Art at his poker game, a much-needed night to forget about anything but a well-played card and a good IPA. We’d both believed when I got pregnant that it would work, that in nine months we would be parents. The bewilderment on his face these past few weeks had been heartbreaking.

But I didn’t start trying to have a child until I was 40. I didn’t marry until I was 39, didn’t meet Art until I was 35, didn’t have one ounce of worry for the 34 years before that that I would ever have trouble getting pregnant when I wanted to.

We could not undo any of our choices and timing any more than we could undo our longing to create a family. And so we tried and failed and tried and failed, the months stacking, the years adding: and then one morning, when I was 42, the test was positive, I was pregnant, our families rejoiced, and Art and I latched on to the most joy we’d ever felt.

At seven weeks, our hope expired. Knowing something was wrong, we left my mother alone on Christmas Eve and drove to the hospital. Carols played on the radio. The birth of a savior, the holiest night. Two gestational sacs appeared on the ultrasound that evening, but neither was as developed as it should have been. We’ll never know what happened was the response of the doctor. But it was hard not to blame my own age, my own foolishness for waiting so long. I should have looked at the numbers more closely.

I swiped my credit card rabidly, willing the machine to cut me some karmic slack, but of course, nothing. The boys weren’t panicking yet, because they had nine dollars of Charlie Joe’s allowance to hold them over. But they blew through that in about twelve seconds, and then approached me with outstretched hands.

I said it was time to eat dinner. While my charges feasted on chicken fingers, I would track down someone with a car and some cash, and then pray the cash arrived so we could actually pay our bill.

I called my mother, always reliable in a crisis. No answer.

Art was on the other side of town, knee-deep in his own game.

This sensation was not new, this feeling of frantic puzzling, trying to determine what pieces I could rearrange to make the whole and command fate. After tests had reassured that nothing was wrong with Art or me, we tried the turkey baster method: no baby. The fertility doctor upped ante with Clomid, a drug that would encourage egg production and leave me with an incredible thirst. And no baby.

The days ticked by as I tried to buy time and wrangle solutions I would have previously mocked. I was the amped up kid gripping the controller of The Claw, sure that this time I could steer it to victory. I brewed Chinese herbs that tasted like dirt, submitted to the pinpricks of acupuncture, lost twenty pounds, slept with a wooden fertility statue under the bed, meditated, tracked my basal body temperature, peed on an ovulation predictor, gave up diet soda, applied castor oil packs, secretly looked at adoption sites, contorted myself into hip opening yoga poses, switched to whole milk from skim, installed a water filter, bought organic vegetables, and always, always, because everyone told me it was best: tried to relax. Finally, Art and I returned to the clinic to talk about IVF, mother of all assisted reproduction techniques. An aged doctor sat twenty feet from us at a grand wooden desk while we slouched uncomfortably in tiny chairs and listened to him suggest donor eggs. Our chances were so much better that way.

We walked out of the appointment in a daze. None of this was what we’d planned. We did not want to use donor eggs. Our options were dwindling with every month. And then, all on our own, the windfall: I had gotten pregnant.

Now I was sitting at Dave & Buster’s with two boys who’d just ordered enough food to feed a family of five, and I had to figure out a way to pay.

My dear friend Erika was my next best bet, since her house was near the arcade. I texted what I imagine so many 42-year-olds text to their friends, just your standard Saturday night At Dave & Buster’s with no money. Can you help?

Is this one of those Nigerian scams? she wrote back. Then she drove to the Waterfront in the rain, met me under the portico, and handed me a wad of cash through her car window. Our night was saved.

The boys and I finished dinner and commenced the horse race/coin drop/target practice circuit, throwing tokens into arcade games like deranged crapshooters, waiting for the prize tickets to spit out. The boys held their breath to see if their numbers came up, pinned their hopes to rickety horses, and became glassy-eyed as they stumbled their way among the roulette wheels and repeated warnings about the under 21 curfew. Twin highrollers in heaven.

After the games, we cashed in our tickets and the boys began deliberations about prizes. Chinese finger torture or Laffy Taffy? Pool their money for a stuffed shark? Charlie Joe and Desmond deftly filled their arms with essentials: a talking mustache keychain, a few plush creatures, a lifetime supply of FunDip.

The voice on the loudspeaker reminded us that ten o’clock was nigh.

We were ready to call it a night.

At 2:20 that morning, I finally drifted to sleep, still hearing the sounds of the boys downstairs on their air mattress, giggling over Mad Libs. Their voices were a tonic.

The last words I heard were Desmond saying, quite seriously, “Butt crack is a noun.”

Our first ultrasound was to have been that weekend. A picture of a child, the sound of a heartbeat. Instead, the first ultrasound had been three weeks earlier, on Christmas Eve, a picture of nothing that would ever open its eyes, the sound of something gone wrong. I don’t know if our grief in the days that followed was keener because the pregnancy was two years in the making. So many days of waiting, taking the gamble, wishing for that magic jackpot. Waiting for the open eyes, the cries, the prize of arms full with a child.

I thought of Charlie Joe’s first trip to Dave & Buster’s. All sound and motion, from the comfort of the womb. The muted bells and muffled whistles he would have heard with his barely formed ears. The thrum of the music sloshing through amniotic fluid, the damper pedaled sound of the jackpot. A world seen without eyes.

For a few weeks I had placed my hands on my belly, feeling love and a sightless connection. Groping, as if under murky water, for the promise of a longed-for child. Now, I was empty. Now, life required me to keep going. To open my ears and eyes to the sure sounds of what I still had, to the people who could help rescue. The house full of Charlie Joe and Desmond was not quiet—for that, my gratitude was enormous. The boys brought with them the thwack of rubber bands and the pounding of feet on the steps. The sound of burps and gum chewing, the exultations over a well-tossed Skee Ball.

I heard belly laughter that carried me into sleep.

After an insanely early wake up, donuts, and cartoons, the boys packed around noon the next day. They crammed their dirty socks and tiny briefs into their bags, gathered their prizes, and walked out the door with sugar hangovers and unbrushed teeth. Remnants of their quarter-tossing triathlon littered our kitchen floor.

I left for a work meeting.

That afternoon I met with a client who told me he’d just found out he would be a father in August. The same month I would have become a mother. I heard myself congratulate him, and I heard the stillness again, that cavernous quiet so familiar in the weeks after miscarrying. I heard myself cry in the car on the way home. Then I walked in my front door and heard the sound of my life going forward.