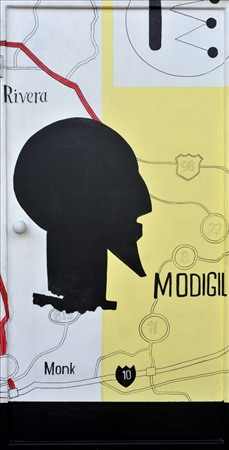 Sweltering heat. nearly empty car. red laces on blue Nikes lean against a pole. pooled on the red and black flooring is rainwater (I hope). A young woman is peering at the subway map. Her long golden brown locks trail down her neck onto her neon green shirt. I almost touch them.

Next stop. Hoyt-Schermerhorn. It is ten-fifteen a.m. An AM New York is lying on the cold gray seat.

Listen to Child of the 808 by Reggie Quinerly.

You can also read more about Tierney’s art and Reggie Quinerly.

Not an Elegy for Bell, Martin, or Brown

This is just anotha motherfuckin’ poet

It was just the night before a wedding,

It was just a regular day,

going to get a pack of Skittles.

I am tired of writing this shit.

Nobody gives a fuck about us.

just buying another T-shirt with

the newest name or face on it,

This is just anotha motherfuckin’

Godzilla in the Ghetto

are flying over East New York

but no one ever noticed.

Bullets make their way into the house

one burrows itself into

I fly to you

wanting to unregister you from

I was having cereal

when I realized we were

I reached past you

to load my nine

told you we were going on a trip.

in the chicken wings

and fast against it

in the face of

More from Illustrator
About the Artist
Reggie Quinerly
Share:

Reggie grew up in a rich musical environment – one that nourished artists as stylistically diverse as pianists Jason Moran and Robert Glasper and guitarist Mike Moreno (featured on Freedmantown along with pianist Gerald Clayton and saxophonist Tim Warfield). They all attended Houston’s High School of the Performing and Visual Arts, where the teachers, said Reggie, were “incredibly devoted. They gave us a real head start.”

After graduating high school he ventured to the East Coast, more specifically, the Mannes School of Music at New School University where he got to study with three great drummers: Jimmy Cobb, Lewis Nash, and Kenny Washington.  After some time honing his chops on the scene he returned to school earning his Master’s in Jazz Studies at the prestigious Juilliard School.

Noted as a “conscientious jazz drummer with a nimble and approachable style” (Nate Chinen, New York Times) he has played with such leading artists as Wynton and Branford Marsalis, Joe Lovano, Greg Osby and Christian McBride. With saxophonist Marcus Strickland, he played and lectured as part of Lincoln Center’s Jazz in the Schools program and frequently collaborates with the talented vocalist and pianist Enoch Smith Jr. who also appeared on Quinerly’s first project. He has toured various countries in Europe and Asia.

As an educator he has presented masterclasses at Tulane University(New Orleans), The Cultural Arts Center of Galicia, Spain and since 2012 he has created and implemented music curriculum for several school districts throughout northern New Jersey.  These music programs  teach children teamwork through the fundamentals of rhythm, melody, harmony and songwriting.  As of 2014 the program has been in partnership with the Little Kids Rock program and offers instruction in percussion, guitar, bass, piano and voice.  He is a member of Percussive Arts Society and the New Jersey Education Association.

More from Artist
About the Author
Sarah François
Share:

Sarah is a poet, essayist, and fiction writer who holds an MFA in creative writing from Long Island University in Brooklyn and has been published in Downtown Brooklyn, visceral brooklyn, Brooklyn Paramount, PoeticDiversity, Vagabond City Lit, The Frisky, and Ducts. She has attended the Aspen Writers’ Conferences and studied with Jessica Hagedorn, Erin Belieu, and Barbara Henning.

More from Author
Comments on “C Train and other poems”
No comments yet. Be the first!