It’s important to get it down before there is no one left to repeat the anecdotes or tales that may enrich life, or simply somewhat preserve a specific person’s life in memory by virtue of survival through the incidents remembered from that life. I’m speaking of my mother now, my mother who is no longer alive, and a simple action, a hidden transgression of rebellious gentility which probably means nothing in itself, but I still thought it was pretty cool.

My mother was married and living in Manhattan in1949 and working in a nondescript time clock job for General Motors. It was pretty oppressive and my mother hated it, crying frequently over the phone to her father, a great educator in Canada, about how much she hated it and how demeaning she felt the job was.

My grandfather, Gramp, a Superintendent of Education for the Province of Ontario, being a forthright, strong principled man, who believed in an individual’s character and spirit, advised my mother to quit and find another job, which she soon did, going to work for American Book Publishers where she helped edit Dick and Jane books for children. 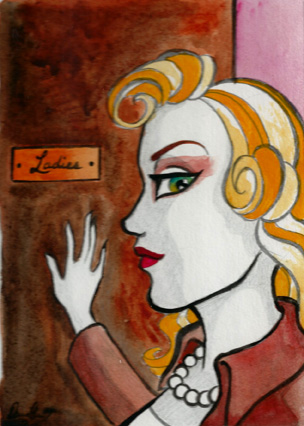 Before her escape from General Motors, my mother was there long enough to take an action which clearly delineated much about how she saw the world, and herself within it. At General Motors, the female employees were not allowed to go to the bathroom without raising their hand and asking the male supervisor for permission. Once permission was given, the supervisor would then give the female employee a key to the ladies room which had to be returned when the respective employee was finished with what she needed to do.

My mother kept quiet, observing, taking in the lay of the land, and then on about her third day at work, she made her move. She raised her hand and asked for permission to go to the ladies room. Then, with key in hand, instead of going to the ladies room, she slipped out of the General Motors building and across the street to Woolworth’s and had a duplicate key made. From that day on, during her short remaining tenure at General Motors, my mother simply went to the bathroom without first asking permission.

Okay, so maybe it’s not a great story of rebellion and resistance, but it does show a strength of character within my mother, and it also shows that she was more concerned with results than acclaim or commotion or credit about accomplishing something she thought was proper. In her own way, she quietly bucked the system, beat the petty tyrant without the tyrant knowing otherwise, and maintained a sense of dignity and success which she felt no need to share, and would most likely never be shared except for the fact that I have scribbled it down now.