I wish I could handle insomnia better, meaning, ultimately, I wish I had the ability to simply fall asleep without lying about with my mind preoccupied with all sorts of nonsense. But I never could. Since childhood, easily falling asleep was not in my nature. And then, when I couldn’t fall asleep within an hour, feelings of panic would ensue, inevitably making it even more difficult for sleep to come.

I wish I had my mother’s calm approach. If she couldn’t sleep, she’d simply turn on the light and read for an hour. “Don’t worry, sleep will come,” she’d say to me whenever I complained about my nocturnal struggles. “Just rest, rest is important if you can’t sleep.” Sound advice, but something beyond my comprehension or ability.

For good or bad, I’m conditioned not to do anything else while trying to fall asleep. I can’t read, and forget about writing, after a certain point I’m focused almost to the point of obsession on sleeping time being sleeping time. The commitment has been made, it’s time to sleep, not do other things, though I usually have the television on with the volume low on either the History Channel or the Military Channel, which nowadays seems to be more like the History Channel used to be.

This prelude about insomnia is leading to my reluctant observation about late night commercials. The same commercials tend to run more frequently in the wee hours of the morning, and the commercials are ones you don’t usually see during average waking hours. Most times I don’t even remember commercials, but lying in a pre-sleep state, with an overly active mind, I’m more receptive to such commercials, not in wanting to purchase any particular product, which usually involves calling a special phone number, but in actually memorizing the spoken lines, reluctantly, with no intention of doing so. 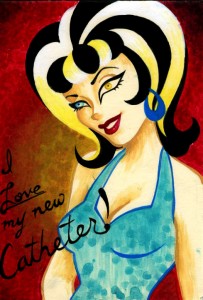 There seems to be a shift in late night commercials, though my observations, like most observations, are certainly not without exceptions. As part of the baby boon generation, it was given when I was younger that the underlying subliminal message of most commercials was “use this product and you’ll get laid.” Sex was the main selling point. I even remember an ad in a magazine for a brand of scotch, I believe, and in the glass next to the bottle if one looked closely at the ice cubes, the word “sex” was spelled out, with each letter shaped in the frost of a separate cube.

Now, moving toward three in the morning, I’m beginning to see more and more commercials that scare the hell out of me in terms of health. The emphasis is on feeling better, learning to live with physical maladies, which, in all honesty, I have never heard of some of these conditions before. It makes sense, I suppose, the baby boomer generation is aging so it represents a vast market of folks who are starting to confront health problems.

Unfortunately, my active imagination has made me prone to manageable hypochondria since I was a kid, not debilitating, but unpleasant and anxiety provoking just the same. Of course, not being knowledgeable in physiology, my repertoire of potential ailments and diseases has been limited to a more generic dread rather than the specific diseases I’m now exposed to on late night television commercials.

One in particular jumps out at me as being particularly removed from reality, an almost trivial, joyful commercial about catheters. A woman with what I can only describe as a grotesquely ingenuine smile stands before the viewer, an insincere young grandmother type, who smiles almost orgasmically as she raves about the wonders of self-catherization with the product she’s promoting. Then the scene shifts to an attractive young woman in a blue shirt, like a semi-nurse, though she’s not, and is obviously a support sales operator, or more likely an actress playing a support sales operator. The blue shirt woman gushes about the wonders and the no hazel breakthrough of home delivery of catheters as if it was a long coveted toy which a child has been anxiously hoping and dreaming of someday receiving.

Of course, my heart goes out to anyone who needs to use a catheter. Once upon a time I worked in a hospital where part of my job was delivering all sorts of catheters, different types and different sizes, to various nurses’ stations. I don’t feel I have to describe it in detail but I remember once seeing a man seated dejectedly in a chair by his hospital bed, his legs spread open beneath his white gown and the gruesome sight of a catheter in plain view, as the man lowered his head in abject and helpless discomfort. But then, flash forward to the commercial and there’s a doctor, or again, most likely an actor playing a doctor, and he’s expounding about how the catheter being offered is lubricated, flexible, can be self-used with less discomfort or irruption, and prevents those suffering from frequent urinary infection. It’s never explained, however, what less discomfort means, whether it means a shift from excruciating pain to mere throbbing stabs as one supposedly, routinely inserts what seems incomprehensible from the vantage point of health.

Another commercial, which looks like it has the same grotesque grandmother, though it’s a different actress, goes on about the revolutionary breakthrough of C-PAP masks and machines, which I must confess I had never heard of before. The commercial goes on playing to insiders, proceeding on the assumption that everyone knows why a C-PAP mask would be used by anyone.
I was forced to look it up, PAP, positive airway pressure, a mode of respiratory ventilation for treating sleep apnea or for criticality ill patients in hospitals suffering from respiratory failure. In the commercial, though, the scene shifts to a happily married couple, a young middle-aged couple, who are beaming about how the C-PAP mask, used by the husband, has allowed them to once again live a happy and fulfilling life.

I’m always intrigued with how the spokesperson on such commercials, usually female, announces with a straight face how respective get well products have been proven scientifically to work after years of study, and then, without fail, the positive results have been confirmed after an extensive double blind college study. I suppose such phrases sound impressive when one is struggling to fall asleep, but in truth, I have no idea what a single blind study, much less a double blind study is, and am always somewhat curious why no specific university or company, or any known entity, is ever specifically identified. Then again, it was said on television, so why wouldn’t it be true?

I’ve also noticed a shift over the past year in commercials about how to have a more satisfying sex life. Previously, the emphasis seemed to be on erectile dysfunction, a number of different products were running ad nauseum offering overnight prowess to men who would simply call a provided phone number at the bottom of the screen and immediately transform once again into virile, young studs. The guys on the commercials, extolling the virtues of being straight and sound again, always seem to be subtly giggling as if telling a joke in a locker room in which the punch line is always fuck. How many times can one laugh at the same punch line? Whoever scribbled the dialogue of such commercials, I suspect, thinks the lines are brilliant with presumed clever euphemisms such as by using a particular erectile dysfunction product, “You can be all that you can be” or “If you have a brain in your head, you will call the number, and you can put the best part of life back into life.”So much for intimacy and conversation, life reduced to a matter of humping, but humping hard and true.

And then there’s the frequently run commercial about identity background checks, further emphasizing we either live in a much more dangerous world, or we are encouraged to be more paranoid about life. Whether it’s dating online or hiring a repairman, this commercial stresses the absolute need to check everyone out, with the idea of trust being an archaic belief reserved in contemporary society for the foolish or naive. A young pregnant mother, who for some reason looks somewhat jaundiced and pale, points her finger toward the viewer and admonishes everyone with the warning, “Nobody comes around my growing family without a background check.” Of course, my initial response is to ask why she thinks I would want to come around her family in the first place.

The background check commercial further confuses me when it mentions as a selling point that you can even do a background check on yourself. I’m not sure why I would want to do that. If I had a criminal record, I think I would know it. But, then again, perhaps the advertisement is also geared to those on the lam who might be encouraged to see if any outstanding warrants have dropped off the radar with the passage of time.

Another commercial which particularly annoys me, perhaps because I write, promotes what is touted as “speech recognition software.” The concept, in short, is a revolutionary product enabling everyone to become better writers by speaking instead of writing, which, in the commercial, is equated to mere typing. Even struggling to sleep, I question the idea of anyone proclaiming he or she has become a better writer by not writing. But I guess the times are definitely changing.

A supposed student appears in the commercial, admitting he’s not a great writer, but now, due to this new great “speech recognition software,” a must in our ever increasing electronic era, he’s found his voice and as a result, he writes much better. The pitch is students can now become better writers because they will be able to speak their papers instead of writing them. I guess I’m missing something. I’m not sure how you become better at something by not doing it, but maybe that’s just me.

There’s another guy on the commercial, a business guy, a management guy in casual dress, who says he writes a ton of reports at work, But now he doesn’t have to anymore, even though he doesn’t put it that way. He can speak reports now with the use of “speech recognition software,” so he is more productive and efficient, and gets home earlier and can spend more time with his kids. Given the obsession, at least in my experience, of the corporate world’s propensity for having meetings, I’m not sure speaking reports instead of writing them is going to get anyone home sooner.

I also know the difference between an oral voice and the written world, so being thrilled about “speaking and the computer typing” probably ignores grammar and syntax, and other such annoying concepts I don’t mean to completely pick apart this revolutionary concept of speaking being the same as writing, it might be fun and useful for some people in some situations, but I still believe writing takes more thought than mere dictation. Still, one young woman on the commercial, blithely exclaims that speaking instead of writing allows her thoughts to keep up with her brain. Another alien concept to me. Yet, the commercial stresses the importance of this facet and claims it’s a lifesaver for busy mothers in “the digital age.”

Supply and demand, it all gets back to supply and demand, and most of these commercials seem to be playing on people’s insecurities and inadequacies to create the demand, with the supply is ready and waiting to be shipped across the country. I hope in reading this, folks don’t recognize that I’m functioning on a less than optimal amount of sleep. I also want to state for the record that this essay was written and not dictated to another person, a machine of any sort, or any other contraption, and now it’s time to see if I can catch an afternoon nap.