I knew I was a true boy mom when I had a moms’ night out with a group that included a concert pianist, a businesswoman and a dentist, and we found ourselves talking over the portobello mushroom appetizer about our six year old sons’ arm-farts.   I don’t know a lot of girl moms who’ve had that conversation.  I also don’t know too many moms of girls who’ve had to issue such pronouncements as, No farting at the dinner table, or who suddenly yell out, Hey, who’s been peeing on the toilet seat in the powder room?”  It wasn’t a role that came naturally to me at first; I was slowly seduced by the world of boys.

My friend Leah goes further, dividing the world of mothers into “boy moms” and “girl moms,” with moms of children of both sexes serving as bystanders in this other, lesser known, mommy war.  Leah says the girl moms sneer at her three rambunctious boys, as well as her failure to rein them in more.  I’ve seen those sneers put into words on urbanbaby.com, a website with a discussion board for parents. “When I see rowdy boys acting up daily, ugh, it makes me think about single-sex schools,” said one girl mom.  Another one actually preferred a co-ed school for her daughter, so the girl could “learn to deal with nonsense.”  Their comments reminded me of the way my younger son Isaac boiled down the difference between the sexes when he was three years old: Boys have a penis, girls have a giant. 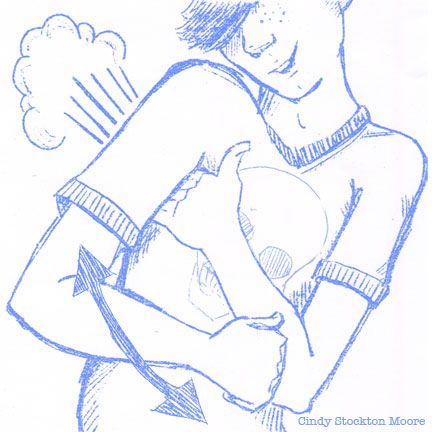 The differences would hit me again later, every time I walked into Max’s second grade classroom.  The girls sitting quietly at the table reading books with lots of words on the page, the boys vroom-vrooming on the floor with multicolored matchbox cars.  The girls chatting, the boys yelling.   It was easier to relate to the girls, being one of them myself.  It reminded me of the days when I was the one reading dutifully at the table.  I had thought of myself as an intellectual early on, and school was my ticket out of lower middle class life in Brooklyn.   I took myself seriously in a world that didn’t always take girls seriously.   And I was proud of the achievements that followed, of my Ph.D. in clinical psychology, of making it into Manhattan, which had been the Emerald City of my youth.  What would have happened if I’d spent my time vroom-vrooming like the boys?

Besides that, my boys so often mortify me, especially in front of the girl moms.  When an eight year old Max stood at the exit of the Einstein exhibit at the Museum of Natural History one day and announced to anyone in earshot, “Wow, nothing can escape a black hole!  Not even a fart,” I turned red and wished I could fall into a black hole myself.

But I had to admit, the mortification grew on me over time.   And I found my fellow boy moms telling similar stories, as we gradually came to admire behaviors we were supposed to be stamping out.  One friend, Michelle, once disciplined her young son Keith with a time-out, only to hear him passing the time by burping the alphabet from A to Z.  She had to turn her face away, so he couldn’t see her turn red from laughing.  Leah envied her sons’ ability to wake up in the sweats they’d worn to bed, which were the sweats they’d worn all day, then run out to play with their friends without ever thinking to change their clothes or stressing about what to wear.   And, really, that was a pretty funny line about the black hole and the fart.

Maybe at first it was a war of attrition for me, but one day, it became more than that.  Last June, I was diagnosed with breast cancer, and it was hard not to fixate on the toxic treatments that lay ahead.  Then, after a double mastectomy, painful weekly reconstruction and biweekly chemotherapy infusions, I suddenly grew tired of the seriousness of life.  I was ready for some fun.  I was ready for boys.

Oh, how I’ve grown to love the noise of boys.  The way they run around, look like a mess, never caring that their pants are Ed Grimley-short, or that their shirts are ripped at the sleeve.  I love the way they can just show up at the park and start up a soccer game with strangers; or how they live for the day they can whip out their gameboys and start helping kids they’d never met get to higher levels in Super Mario Brothers.  Or the indescribable look on Max’s face when he heard the real name of a famous fashion designer.  “Lip-SHIIIITS??!!!!  Lip-SHIIIITS???!!!” as if his whole life was worth living for that moment alone, and the moment he’d bestow his newfound knowledge on the other boys.  Not only the name itself, but the potential for jokes about having one’s mouth and ass referred to in the same name would surely render him King of Disgusting Stuff for the day.

I’ve even learned to love the way my boys belched complete words like “ape” and “ox,”  the same words I’d heard belched out by their dad after many a carbonated drink.  The same dad who has a Ph.D. in Mathematics from Yale.

I can’t help thinking their noise and mess will be so much more one day – a sense of freedom, a sense that the world is a place to enjoy the fun of simply being alive, rather than just a springboard for oh-so-important achievements.  Besides, sometimes, it’s that very sense of fun and vitality that paves the way for those achievements.  Isaac, for instance, started taking piano lessons when he was five, so he could play Hey Jude like Paul McCartney.  At age six, he was playing Thelonious Monk with the same gusto he lavished on his arm-farts.  As a four year old, Max aspired to be a professor of nose picking when he grew up, then he decided to be a Taoist monk, lecturing the grownups on the way of the Tao and the yin/yang. And they would listen.  Now, at age eleven, he’s honing his talents in mathematics and cartooning.  He draws comic strips with lots of blood and inappropriate dialogue, while calling out the first fifteen Fibonacci numbers.   I don’t know what either boy will end up doing with his adult life, but I know it’ll be interesting.  I hope it’ll stay fun.

I hope my boys will know the difference between those kinds of achievements and the kinds we parents brag about on urbanbaby, like how early they learned to read, or whether their admissions test scores were in the 99.9th percentile as opposed to only the 99th (believe me, it happens).  And I hope they steer clear of the kinds of achievements that are just a more socially acceptable form of aggression, like being able to brag about which top schools they get into, or the fancy neighborhood where they live, or amassing the most money.  Why aim so low, when they can aim for fun?  For feeling alive and free?  I hope the girls learn the same lessons as they grow up.   And I hope it doesn’t take them as long as it took me.

When I came home after one of those chemotherapy infusions, five year old Isaac met me at the door, with ten year old Max standing behind him giggling; both were sharing the same evil grin.  They were always there to greet me on my chemo Tuesdays, grin in tow.  On this particular day, Isaac looked me in the eye very seriously and said, “Mom?”

“Did you know I like big butts and I cannot lie?”

I wondered what other inappropriate songs Max was teaching him, but didn’t ask any questions.  I also didn’t think about the waves of nausea that were going to hit me in the next couple of days, or how much hair I’d find on my pillow the next morning, or whether I was going to die in my forties.  I just laughed.  My treatments are finished now, I’m still alive, and the boys are still making me laugh.

I hope my boys never succumb to my attempts to civilize them.   For one thing, Isaac’s been working on an arm-fart/burp combination that’s going to be a killer, and I wouldn’t want to miss it.