Leave it to the French.

The noun flâneur, which first came into use in France around the 16th century, basically meant “time-waster, idler, loafer, aimless dunce”; I think the current American idiom for this is ‘hipster’. Anyway, fast forward three hundred years to Paris in the 19th century, and suddenly French luminaries are re-imagining the word with greater importance: poet Charles Baudelaire viewed ‘Flâneurs’ as literary, artsy types who strolled the alleyways and side streets of Paris in order to imbibe every ounce of life that their hearts could endure. And the novelist Balzac described flânerie as “the gastronomy of the eye” and that the best place for such activities were the beautiful alleyways of Paris. In fact, even the word “alley” comes from the French, meaning “the way to go”.

The world over loves its alleys, is enamored and hopelessly beguiled by them. Stacks of dreamy and romantic idealizations regarding these narrow lanes brim our libraries, bookstores, and pharmacy gift card sections. It is the image of the rustic stone wall tangled in a Kama Sutra of overflowing bougainvillea; the authentic side-alley tavern dotted with wooden stools and rough-hewn tables with barely enough room for the guitarist softly crooning about the stars; it is the rain-swept passageway as lovers run laughing beneath an upheld jacket, their warm and dry hotel bed just minutes away.

Admit it, you just swooned a bit yourself.

In Italy, an alley is called a vicolo; in Japan, it’s roji, which translates loosely to “little street”. In Indonesia, they have the dubious distinction of being called gangs. Want to have fun with first-time Westerners in Bali? Tell them that in order to get to their hotel they first must enter a gang. So much for that ‘Eat, Pray Love’ spiritual exodus. 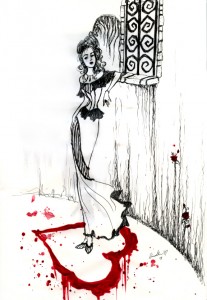 Mexico has its own name too. Specifically, here in Guanajuato, an alley is called a Callejon, (kah-yay-HON). Narrow, serpentine, and befuddling, the most famous of all the callejons that ramble up and down this hillside colonial city is named Callejon del Beso, or, “Alley of the Kiss”. At its widest point, it is merely five and a half feet across. Yet, as you gaze up the sides of the walls, the balconies jutting from either building grow conspicuously closer until they almost touch. Legend contends that years ago a young heiress and a local miner fell in love, but that the girl’s father threatened to send her to a convent if she ever saw the boy again. The girl’s family lived along this alley and owned one of the highest balconies. The boy arranged passage to the opposite balcony and for several nights stole up to greet his love. They were able to sit inches away from each other and merely hold hands under the hushed canopy of a night sky.

Well, the story ends as most do when star-crossed lovers are involved: horrific death. One night, the father discovered the lovers holding hands, and enraged, grabbed a knife and stabbed his daughter right where she sat. As her lifeless hand grew cold, the boy kissed her fingers one final time.

Now Callejon del Beso has become a typical tourist attraction-cum-Blarney Stone: if lovers kiss on the third step of the alley, seven years of happiness are promised. But not all alleys are so romantically inclined in Guanajuato. In fact, my favorite is called Sal Si Puedes, (“Exit if you can”). Now that’s a name.

I live on an alley myself in Guanajuato; Callejon de Tamazuca. But please, before you ask about the sexy flowers and cool little restaurants, let me tell you that Tamazuca is not destined anytime soon for Travel Channel status, unless the topic is “Favorite Places To Stumble Down While Vomiting”, or “Top Ten Destinations to Smash Bottles Whilst Maniacally Laughing.” At least there’s a friendly cantina three doors down, and the patrons are not shy about full-throttled sing-a-longs. At 4 a.m. On a Tuesday. And don’t even get me started about ‘The DQ Specials’; those serendipitous piles of dog poop my wife has to warn our daughters not to go traipsing through on the way to school in the morning.

Yeah, I guess you could say what Tamazuca lacks in romantic allure it makes up for in life-lessons.

But in spite of it all, I love our home, and our callejon. I love Roberto and his closet-sized store where we can pick up tortilla chips, mango juice, and loaves of the ubiquitous Bimbo-brand white bread. He’ll even sell you a couple of aspirin if you’ve a headache. I love the bridge halfway along the callejon where we sometimes stop to admire the rest of the city, its brightly colored buildings a stupefying palette of ochre, fuchsia, and ultramarine. Some buildings are handsomely flecked at their corners like Italian frescoes, creating dynamic images any photographer would kill for. I love the quiet street dogs, always wary of buses and who use our pedestrian-only callejon to nose around and look for food. Feces aside, the creatures are gentle and my daughters always bring one or two Milk-Bones in their pockets to toss to them. The dogs are grateful and the act never fails to make my daughters smile. I even love this tiny red bird which, every night at dusk, settles atop a TV antenna hanging precariously over our alley. I look for him when sitting atop my terraced roof at the end of each day. His feathers seem to brighten as the sun stretches and falls behind the buildings, then the eventual hills. All the while, the bird does nothing but rest, maybe flap a wing or two. Grow brighter. It’s a strange kind of magic.

Alleys aren’t heaven on earth as much as they are their own unique worlds. They hide from you. But what they refuse to divulge is remedied by all that will eventually unfold if you remain patient and confident there are secrets waiting to be shared.