Based on the poem “Double Helix” by Sean Thomas Dougherty

“Sexual relations can take up the whole of adult life. But if that life were a lot longer, might not staleness stifle the capacity for arousal well before one’s physical powers declined?”
–Milan Kundera

In Spring we keep the windows open at night to let sparse sounds fill us and soft whispers of wind lull us to sleep. But last night, after I had fallen, an urgent noise drilled into my dreams, what the dreams were I can’t say. The sound became everything and woke me. Above me, long shadows of streetlight stretched across the ceiling. The noise, like a scream, rose and fell on the air. 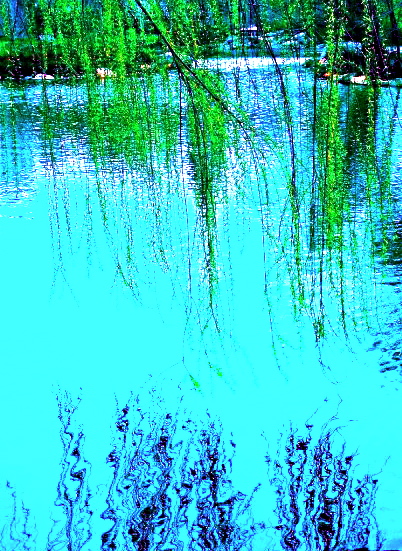 “What the hell is that?” I was grumpy, spitting the words without coherence or direction. But I wanted to know. I hoped it wouldn’t stop right away. A cat, I thought, must have been howling for a good lay––a poor creature wanting nothing more than to reproduce. I listened harder and knew I was wrong. It was a crying child, a hungry baby. I looked at Rachel. Her eyes were wide open.

Not knowing the power of sound, the baby cried out from four or five houses down, allowing itself to be filled to the brim, bursting with instinct––like a siren, unaware. And we, Rachel and I, the childless intellectuals that we are, woke instinctually. We knew something was in need.

Rachel had fallen asleep while reading. The book––Kundera––lay open on her chest. She closed it and carefully set it on the floor.

The cry lingered on as we stared wide-eyed at the ceiling shadows dancing. The leaves of a sycamore were a bushel of darkness, flickering around the edges. Our blind slats stretched out in silhouettes, elongated by the swimming street lamps––the illusion of light against matter.

Rachel’s icy toes barely touched mine. I felt her hand on my thigh. As the wind rose, the child’s cry cresendoed with it like a symphony of screams. The wind, old and transparent, hummed; the child, young and stimulated, hit the high notes of longing, or maybe fear. The hair on my arms stood as if the wind had straightened it. I felt Rachel shiver. Small tremors, creaks and clatters, moved through the room. I thought I heard footsteps––pitter patter, pitter patter. But then the wind was dying, and the child’s cry lost volume slightly.

Rachel turned to me, tossing her legs over mine, interlocking them. The child grew quieter. We lay on our sides, entangled like a double helix. Rachel looked concerned or confused––I couldn’t tell which. She said, “Is that why we don’t have kids?”

The cry was almost gone, suffocating under the wind. The child’s mother had surely come, cradling its head just as Rachel began to cradle my own. In the dark, I pictured the mother stroking the child’s legs as I traced lines with my fingernails down Rachel’s thigh. We leaned in and kissed gently. I cupped her breast and kissed the bust, picturing the eager child as its mouth took control of the nipple, wanting never to release. We rolled into one another, me on top of her, her legs knotted with mine, twisted. And together, the child’s mother and I sang the softest lullaby, filled our loved-ones with all we had––the milky giving of light.