My first elk was given to me by a gray jay. It is a terrible thing to have the mountain against you; nevertheless, I continued over the course of six days to exhaust myself climbing the steep pitch of his forests. I was young, and heedless of my fatigue, I began to stumble over his stones and trip on the severed branches slowly working their way back into the forest floor. I was bleeding beneath my left eye and came close to losing half my vision when I slipped on a wet slope and tumbled headlong over a short, granite precipice to launch face first into the barbed and mossy arms of a diseased lodgepole pine. One of his branches opened the flesh on my face then was snapped by my cheek bone. We fell together, that broken branch and I, and lay over the roots of the dying tree.

When I woke, I was hungry. I had eaten all my food and knew that it was foolish to remain in his forests while the mountain was against me. In my jacket pocket were the crumbs of corn tortillas. I was licking them from my palm when I met the gray jay. Recognizing his hunger, I offered him some corn on the condition that he answer my question: Gray Jay, the mountain is against me. Where are the elk?

He pointed with his beak up the slope. I thanked him by brushing the food I had left from the skin of my palm. I did not take a step before he alighted on the pine needles to eat it.

I smelled her. Her smell ignited in me a fire that drove the enervation from my veins. I climbed after her. There were three of them, and in my intoxicated state I came on too strong and drove them deeper into the forest. 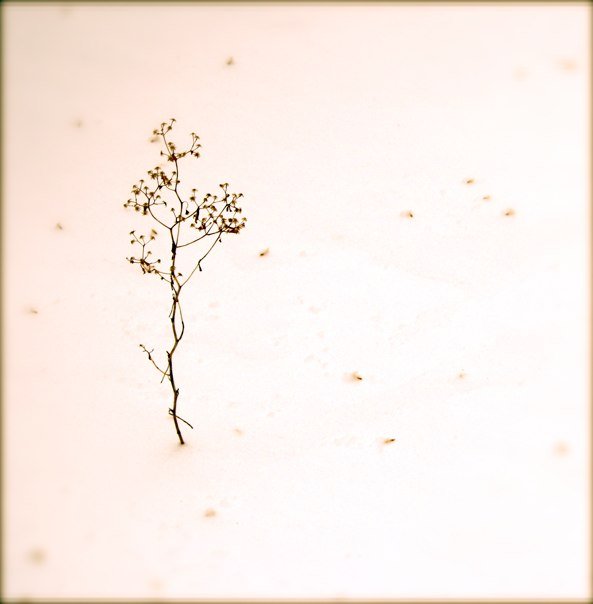 It started to snow as I pursued them over the talus-covered summit. After my first mistake, I made no others. She did not know I was still coming. Yet they descended along the western slope of the Gore Range and continued North throughout the afternoon at a pace I could not keep. Because of my youth, I was overcome by the mania her scent induced. It never occurred to me to stop. I was jogging and still more than a mile behind them. The sky cleared. Just before sunset they ascended a low pass short of timberline. I ran for three miles with my face to the sun. As the bottom half of the sun was slipping beneath the horizon, I felt her presence and slowed to a walk where her track dropped into a little bowl crowded with orange and red flaming aspens.

I raised my rifle and, sighting into the concavity, stalked toward the edge of the bowl where I found her eating the fallen aspen leaves. We looked each other in the eyes. She accelerated at a velocity that stunned me, tripped over a log and shattered two vertebrae in her neck against the trunk of a stout aspen tree. She collapsed and continued to breathe.

Her companions and the sun were gone when I descended into the bowl and spoke her name: you are as clumsy and tired as I am. I stepped into her field of vision. The muscles in her hindquarter twitched. She managed to get her forelegs under her. Then she collapsed. She watched me and continued to breathe. I could see her tongue. There were unchewed aspen leaves in her teeth. Although I was yet to feel it, I knew it was cold. Twilight was ending. I told her I could shoot her if she liked and asked for her preference.

I shot her in the lungs, smoked my pipe for her and eviscerated her in the dark.

I had to return for my backpack to carry her out, which was in my tent on the other side of the mountain range. I had no light and ate a portion of her loin as I walked.

When I returned with my backpack to the bowl crowded with orange and red flaming aspens, the sun was cresting the Gore Range. A gray jay alighted on the eviscerated gut of the cow elk. I watched the gray jay pull its breakfast from the gut pile then spent the morning cutting her musculature, most of which was still warm, from her bone.

It was dark when I started the second trip to the Accord. My legs were unsteady, and the Great Bear, having descended from the night sky, was talking in the ponderosas beside me.