Corporate types: if you can’t laugh with ‘em, laugh at ‘em.

They may not be your first choice of partner for charades or a tequila bender, but corporate folk have their own special way of acting outside the box. They’ll spew buzz words at you until you’re drunk on jargon. I’m not blamestorming them. When creativity is corked by a too-tight tie or suffocated by pantyhose, it leeches out in the form of a secret 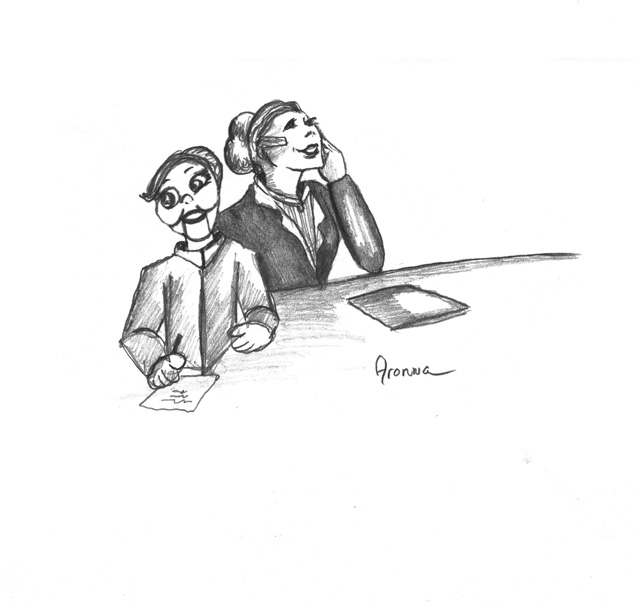 The lingo collects in non-corporate brains like so much spaghetti on the wall, as in, “We’ve got a lot of spaghetti on the wall,” an observation made by a voice coming out of a speaker phone in a meeting I attended recently. The voice was intent on pulling a thread of said spaghetti — maybe two. But no more, because “We don’t need to boil the ocean.” One day, global warming may actually make good on this cliché.

I’m a hired gun. When HR reaches out to me, I’m incentivized to get up to speed ASAP, lest my job be backsourced. Rightsizing (a.k.a mass dehiring) is an opportunity for my kind to add the illusion of “bench.” As in, “Let’s make sure we bake something into the brochure about the strength of our bench.” It’s a fine line between rightsizing and capsizing, but if you’re building the ship while you’re sailing it anyway, WTF? FYI, WTF is not a sanctioned response. When in doubt the bullet proof comeback is, “Roger that.”

Corporate wonks eat military jargon like candy, getting their sticky fingerprints all over it. “Boots on the ground,” was the buzz phrase du jour about the same time teenage girls began sporting camo with their Uggs. It’s still deployed when talk turns to bandwidth, as in “We need more boots in East Jesus.”

Speaking of Jesus, coming to Jesus is no fun. It’s usually a pissy middle manager who initiates the dreaded Come to Jesus meeting, the purpose of which is to make sure you know just exactly who the son of God is. Roger that.

And speaking of God, nothing says, “I’m important,” like a Bluetooth accessory on the ear, even if it makes you look like something that just escaped from the Borg. Given that the wearer may be participating in multiple meetings or even meetings in a parallel universe, it’s hard to know whose place it is to correct him when he says something stupid like, “Let’s flush out that point.”

Is the point in the toilet? Or hiding in the brush? Flushing is something a dog might do to a pheasant, but only if that dog hunts. In meetings like these, many dogs are found not to hunt. What the Borg actually means is flesh. He wants to deep dive, drill down and double click the hell out of whatever bullet he’s taking ownership of. Who cares, as long as it’s robust and scalable? Nothing incentivizes the B2B buyer more than scalability. It’s a build-out thing. Always good for grabbing the low hanging fruit.

Grab enough fruit, and you may need to back up the truck. Although this vehicular allusion, evocative of the loading dock, was spawned in financial circles, it’s not just for investors any more. Suits know a good phrase when they hear one and they like the sound of it on their own lips. It’s usually prefaced with a stern warning. Because we all know what happens when you back up the truck too recklessly: the wheels come off.

You can always tell when the wheels are coming off a meeting: hands pump furiously under the table because no one can resist their Blackberries another second. The poor AE trying to recap is virtually talking to himself. Everyone has been Rogered to distraction — wham, bam, time to scram. So what is the net takeaway; the net-net, the bottom line? The consensus agreeance is that key learnings must be socialized. Alas, there is no ROI for the time spent watching the clock hands inch their way toward the hour of liberation.

It’s astounding how much verbiage can be strung together to communicate so little. At the end of the day, no matter how many five-dollar words are dropped, buzz is cheap.

* No real words were harmed in writing this article. All the words you know and love can be found, intact, in the OED.