I never had my Holy Communion. Indeed, I never dragged my feet to so much as one Catechism class. So, when I was sent to girls’ Catholic boarding school in 11th grade, I realized that participating in weekly mass and receiving the sacrament of the Eucharist might prove tricky.

My parents weren’t religious—just strict—and they hoped the nuns at the Sacred Heart could whip me into shape. There I would receive individual attention, positive reinforcement, and hopefully a healthy boost to my anemic 1.79 GPA—things my family presumed more substantial than God’s green light to eat a cracker.

At Sacred Heart, we were required to attend mass every week. Sunday mornings, I would line up among the throngs of worshippers and partake in the Eucharist.

Eucharist- n. A Christian sacrament in which bread and wine are consecrated and received in commemoration of the passion and death of Jesus.

Every mass, I worried that once I joined the line, someone would point and rat me out: “You can’t be in line, you faker! Father! Lola The Heathen is trying to eat the body of Christ!”

However, after the first month of mass, it became clear that this stone would go unturned. Each communion, I would rise and enter the aisle along with my pew, following our line up to the altar. When I reached the front, I’d put out my hand to receive the Eucharist instead of having the priest place the host directly on my tongue. (Somehow I thought this might soften the criminal act.) Host in hand, I would walk back to my pew, coveting the thin wafer that I could feel adhering to my sweaty palm. As I sat down, I would eye my pew companions to see if anyone had read my guilty face. Then I would pop the wafer on my tongue.

How I loved the taste and texture of the host! So crisp. Just a little salty. I would push the wafer toward the roof of my mouth and make it stick for a second before probing with my tongue, cracking it in half. Then I’d let it melt into mush before finally swallowing. Sometimes, I would even think about Jesus.

After mass, I would shuffle over to Father Conrad’s office, which was off the side of the chapel entrance. He had an Uncle Nestor quality about him that was further enhanced by his male pattern baldness and flowing robes. I’d knock politely and he’d answer the door. For a few minutes, he would solemnly drone on about that day’s sermon before I was able to get to my request. Did he have any left-over host sheets? He did indeed and he would shuffle back to his desk, pick up a crumpled brown paper bag and hand it over to me. 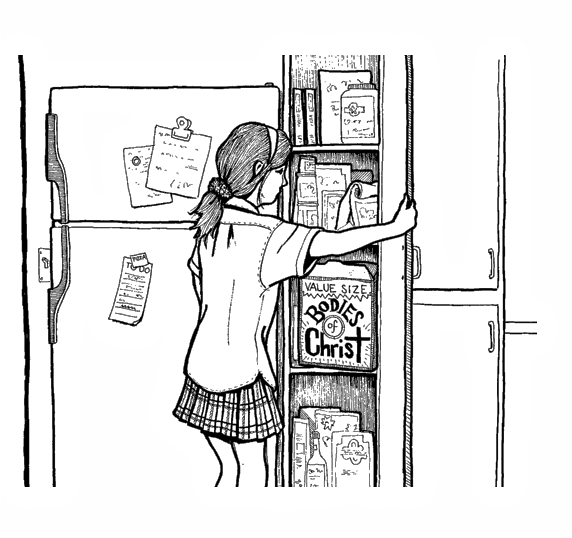 Host sheets were the rinds of the wafer from which the round Eucharist hosts had been punched. Following communion, Father Conrad placed these sheets in a paper bag and took them back to his lair. Once, in my junior year, I had seen a Mexican exchange student with that brown paper bag and upon learning from her how the goods were procured, I made sure I was first to hit up Father Conrad after mass.

Having grabbed the bag from the Padre, I would make a pit stop at the vending machine for a soda and a candy bar, then head to the dorm lounge that housed three comfy couches and an old Zenith. Situating myself on the middle couch, I’d commandeer the TV for the afternoon, hoping to find a John Hughes movie and munch on host sheets to my heart’s content. I savored one sheet at a time—breaking it up in sections and sucking off the paste. A white ring of flour would develop around my lips. My eyes glazed over.

Other students shuffled by me in slippers and ponytails on their way to the kitchen or the laundry room. Some would stop, and, recognizing the familiar brown bag on my lap, ask for a host sheet. I’d look over and eye them up and down.

“Well, now. Have you been a good Christian this week?” I’d ask.  “Have you accepted Jesus Christ your personal savoir?”

“Fuck you Lola… Give me some hosts.”

“That’s not very Christian-like,” I’d say crunching into a fresh sheet. “I don’t think Jesus would care for that kind of language.”

“Ok. Jesus is a forgiving man. You’re lucky there. Come here, child, and let me bless you.”

They would walk over to the couch where I’d moan some Latin-sounding gibberish and make the sign of the cross in front of them. Then I’d offer up whatever was left of the body of Jesus.

I’d chuckle as they walked away, digging back into my stash. On the television Molly Ringwald was getting ready to show me some real teen angst. As I finished off the final host sheets, I’d always make the same solemn vow: I would fill myself with the Body of Christ. So much so that one day I might, myself, become Christ-like.