Colin Grubel serves as guest arts editor for our Summer 2018 issue (Issue #41). For each of our 5 feature pieces, Colin has curated selections from his digital photography portfolio at dabblingduck.smugmug.com. Keep reading for a brief discussion of his selection process. 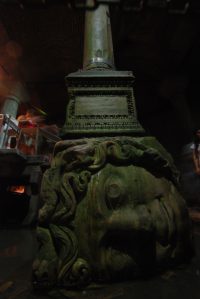 About the photo: This was taken below the city of Istanbul, in the ancient cisterns. They have statues of four Medusa heads there, and to my recollection, no two match. In this one, you can see one of the snakes on top of her head, although they don’t feature as prominently. But she does have a slight smile, which is interesting, considering her head is holding up a pillar.

About the selection: This image made me think of the main character in the story (Yonah). It reminded me of how she might be feeling—she’s getting a lot of pressure from home, from people in the outside world. And the photo shows a head that’s sort of locked in a vise, but at the same time, has a bit of a smile on its face.

On Ojibway Island and other poems by CJ Giroux 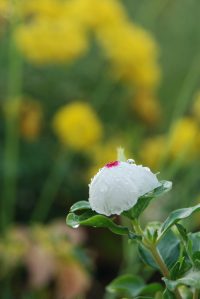 About the photo: I never was able to identify the species of this flower—it was in my cousin’s garden and she didn’t know what it was either. I’ve since shown it to many people who are gardeners and they also couldn’t tell me. So it’s a mystery cultivar. I like this photo because I was searching at the time for different ways of taking photographs of flowers that would make for a more interesting framing and composition, and this one pleased me.

About the selection: This was probably the most natural connection, since I’m a nature photographer. There were several photographs from my collection that I could have picked, but to me, this picture of the flower has a sort of churchy feeling. The white blossom with the dandelions in the background—for me, it calls to mind the idea of a penitent worshiper receiving grace. And I found a religious theme running through the poems, although obviously set in a background of nature. 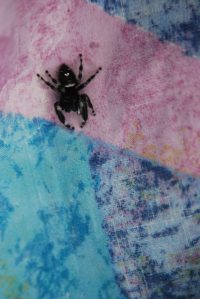 About the photo: I found this jumping spider crawling across a sheet on Swinburne Island in New York Harbor, between Brooklyn and Staten Island. Swinburne is part of Gateway National Park and is not open to the public but I was there on a research permit. We were in the middle of banding birds, which is probably why we had the sheets down, and the spider just happened to crawl across.

About the selection: I think this one speaks for itself, and perhaps it’s rather literally inspired by the title. Although it’s funny, I just noticed that the spider actually has one leg missing, which might also reflect the author’s emotions in the essay, being disconnected or far away from her mother.

How to Be a Good Mother (memoir) by Iris Anixter 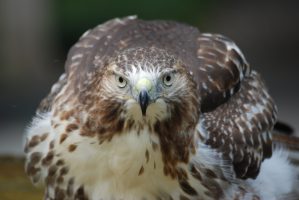 About the photo: This photo was taken in the Brooklyn Botanic Garden, and features a red-tailed hawk bathing in a fountain. It had just finished off a squirrel, and was cleaning itself. I’m not as close as I look like I might be with this photo—other visitors got closer without problem, but I stayed a little farther off. It didn’t seem to mind all the attention.

About the selection: This one was probably the most difficult to select for because it addresses a kind of deep topic, and it’s hard to find something that’s appropriate and matches the mood. The hawk kind of has this natural, fierce look to it, which matches some of the mood and temperament put forward by the author—the anger, frustration, and helplessness. 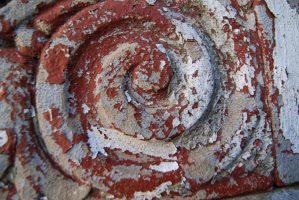 About the photo: I think this is part of, for lack of a better word, the railing of a brownstone building in the Crown Heights neighborhood of Brooklyn. I just thought it was an interesting architectural detail. I don’t take a lot of more artistic photography, but sometimes there’s something I just find that’s attractive. I like the swirl, but also the contrasting patterns of the paint and how it’s chipped away.

About the selection: I didn’t have anything particularly gruesome or funny—certainly nothing with rabbits. But I did once have a parasitology textbook in college that had a black-and-white picture of a prolapsed anus (which figures in the story), and it kind of reminded me of a cinnammon bun, which this photograph does as well.

Colin is a freelance science and nature educator and a wildlife photographer. More photographs can be seen at dabblingduck.smugmug.com.

More from Author
Comments on “Medusa Heads to Red-Tailed Hawks”
No comments yet. Be the first!