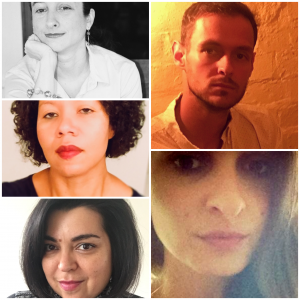 Eastern Europe is not Western Europe, but its impoverished, uncool cousin. Eastern Europe lost the Cold War and everybody else won it, without even trying. Statistics show that Eastern Europeans are among the most pessimistic people on earth.

Join us for a multi-genre evening featuring writers with deep personal, family, and linguistic ties to the region. You’ll be entertained by Angela Ajayi, Marek Kulig, Maia McPherson, Ileana Nachescu, and Claudia Serea. Here is more about your readers:

ANGELA AJAYI’s first story, “Galina,” published in Fifth Wednesday Journal, won the 2017 PEN/Robert J. Dau Short Story Prize for Emerging Writers. Her essays, book reviews, and author interviews have appeared in The Common Online, Wild River Review, and more recently, in the Minneapolis Star Tribune. She holds a BA in English literature from Calvin College and an MA in comparative literature from Columbia University. Ukrainian and Nigerian by birth, and American by citizenship, she is working on her first collection of stories in which she seeks to explore the intersection of race, gender and class in cross-cultural spaces.

MAREK KULIG was born in Mielec, Poland, grew up a bit on the Jersey Shore, and came to in Dartmouth, MA, where he once taught high school English, and now tends bar. He contributes to a local food magazine called Edible South Shore & South Coast. Marek has an MA in English Literature, and he recently attended the Cuttyhunk Island Writers’ Residency and participated in the Bread Loaf Writers’ Conference. This summer he’ll be traveling to the Disquiet International Literary Program. He’s writing poetry, fiction.

MAIA McPHERSON is a life-long resident of Boston, MA. She is a graduate of the University of Colorado where she studied cultural anthropology and the Bread Loaf School of English, where she earned a Master’s of Art in English. Maia writes, paints, and draws as a daily practice and is beginning to explore ways in which to combine her creative work into larger pieces of art. With her partner, Stevie, Maia co-founded a writing group called the Workshop which published a poetry chapbook in 2017. Maia writes within the themes of dislocation, sensory immersion, the limits and continuation of culture through generations and geographic change, the power of human relationships, and the spaces we make for ourselves. Her poem, “The Woods Eat War and Forget It,” was recently published in the New Mexico Mercury. Currently, Maia teaches kindergarten at an independent school and is deeply committed to fostering the human expression of children (and the adults who care for them).

ILEANA NACHESCU grew up in socialist Romania and came of age during the uprising that overturned a dictatorship in her country. She came to the United States as an international graduate student and is now a faculty member in the Women’s and Gender Studies Department at Rutgers University. Her essays have appeared in The Rumpus, Entropy, The Atticus Review, and elsewhere. She is the essays editor of ducts.org and has hosted and performed at Trumpet Fiction, a New York-based reading series that is now reaching its 20th year. A Bread Load Writers’ Conference attendee, she is at work on a book-length project, Memoirs of a Socialist Childhood.