Your most fundamental drives are stitched into the fabric of your neural circuitry, and they are inaccessible to you. You find certain things more attractive than others, and you don’t know why.

– David Eagleman, Incognito: The Secret Lives of the Brain 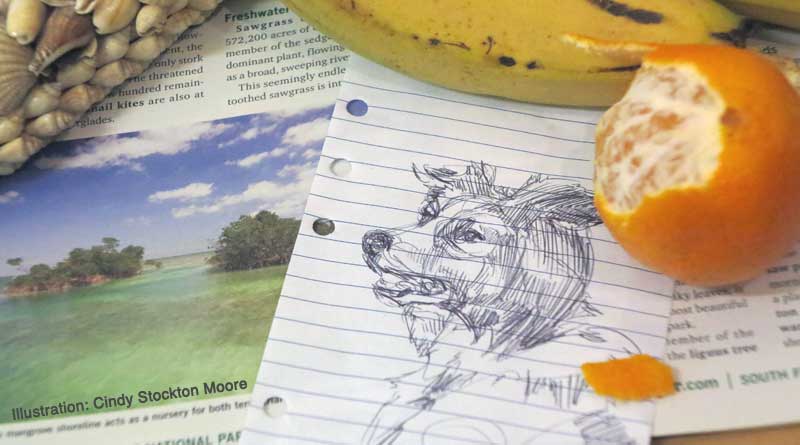 At least the African was an excuse to get out of the house, like a trip to Staples for a bargain box of correction tape. According to my online profile, I was an “overeducated intellectual elitist looking for like minds. My career has been dominated by professional writing and college-level teaching, so I’m wowed by wit. I’m an NPR-listening, New-Yorker-reading, tree-hugging, artsy, peace-loving, left-leaning tall drink of water.” According to his profile, he was a South African, as tall, fair, and chiseled as a Norse god. Based on his profile picture and the paucity of text, I’d typecast him as a “body surfer.” Body surfers posted pictures of themselves naked from the waist up. They pursued sports like volleyball, which were just excuses to take off their shirts in front of women upon whose bodies they hoped to beach themselves. Already he bored me.

In the few exchanges leading to our first date, the African wrote me little, phoned me infrequently, and when he did, wouldn’t make his Afrikaans accent intelligible. Worst of all, he called himself, “Alby.” His screen name was “AlbyBack.” I couldn’t imagine spending the rest of my life saying “Alby.”

The African invited me to meet him in the dog-friendly coastal town of Dunedin. I’d order a smoothie for dinner, dazzle myself with my own chatter, and ditch him. Then my old Border Collie Casey and I would stroll alone to the pier. Tourists would stoop to pet her, children would throw sticks for her on the playground, and I’d hitch my gaze to the ospreys over the Gulf of Mexico. Maybe, as crowds gathered to watch the sunset over the water, I’d even see a night heron slouch in the shadows, shining menace out of its ruby eyes.

I buckled Casey into her seatbelt, and off we went. Ordinarily, when I ran late I’d fling myself into the car and hurtle into a white-knuckle slalom on Interstate 19, perversely aware that Dateline NBC named this road one of the deadliest in the country, probably because New Jersey drivers like me were on it. I usually hated myself for running late, and I did it all the time. This time, though, I refused to castigate myself. The African wasn’t worth it. I found a parking spot in the shade beside a white picket fence and a blooming oleander hedge, cracked the windows to the sixty-degree air and the fragrance of crepe jasmine, unbuckled Casey’s seatbelt to make her comfortable, then walked the three blocks to the coffee shop. In the shade of live oaks, the sidewalks ran level along small and briskly edged lawns and a row of closely spaced bungalow-style houses, all painted from a tropical palette and converted to tourist shops and bistros. When I arrived at the coffee shop, I was ten minutes late. Give or take.

As I approached, I remembered the seating was out in the back yard under live oaks and a wisteria arbor. Casey could join us, and for a moment I regretted not bringing her. No, this was better, I told myself. She’ll give me an excuse to leave early. I walked up the front porch and into the shop, which sold coffee drinks, smoothies, cookies, scones, and brownies, as well as crystals, Tarot cards, angel figurines, and bumper stickers that said, “In Goddess We Trust” and “My Other Car is a Broom.” My gaze bounced from one face to the other, but none resembled the grainy JPEG of the angular half-naked South African wake-boarder with the six-pack abs and the light brown hair.

An attractive, middle-aged brunette in a flowing purple skirt jingled around the counter. “Can I help you find someone?”

“I’m supposed to meet a tall, handsome man with an accent.”

“Oh, he just left!” She skipped past me and dashed out the door. A moment later, the bell on the door tinkled, and she blew back in, her glossy black curls rolling around her head. “I can’t believe it! He vanished!”

“Listen,” I said, waving it off. “We were supposed to meet at five-thirty. If he can’t wait ten minutes, I don’t want him.”

She leaned in conspiratorially and concealed her mouth with the back of her hand. “Everybody here’s meeting someone they met on the Internet. The fumes of desperation get pretty rank.” She gestured toward the couples dining outside, her bell sleeve fluttering. “It’s a constant sewage stream of blind dates.”

“I’m starting to think all first dates are blind. But who are we kidding? So are first marriages.”

We fell on each other, hugging with laughter.

“I’ve hardly dated anyone since I got divorced,” she gasped, patting my back. We pulled apart, recovering from our sudden intimacy. “I run this business the way I want. I decide what to sell, what to serve. At home I decide what to eat, when to sleep—”

“Whether or not to close the bathroom door.”

“When my daughter went off to college,” I said, “I thought the loneliness would kill me. But I gotta say, I’m enjoying the freedom.”

“I’m with people all day here.” She squeezed my upper arm, and her blue eyes sparkled with affection. “I see my girlfriends the rest of the time.”

I didn’t need a man—I needed more girlfriends like her. But it sounded like she didn’t need me, and it didn’t matter anyway. “This is my last first date for a while. The fact that he didn’t even stick around to meet me is perfect.” I shrugged. “The holidays are coming, I’ve got plans with friends, and my daughter’ll be home for winter break. We’re moving to California next summer anyway. I shouldn’t be dating at all.”

She flapped her hand as if clearing cobwebs. “Women come in here so obviously needy. I never understand why they think they have to have a man.”

How I’d love her for a best friend! But how weak of me! How unseemly! I’d make ties in California. Better to cut this conversation short. “What I really want out of this evening,” I said coolly, “more than anything in the world, is to get one of your strawberry-banana shakes and take my dog for a walk.”

“It’s gorgeous out, isn’t it?” She swirled toward the counter and left me smothered in patchouli. As she put the icy cup in my hand, the bell on the door behind me tinkled. She lit up. “Alby!”

A very tall, very lean man returned my surprised look. Then he burst into laughter. “Lisa?”

My new pal beamed at us. “You know each other?”

“This is the tall, handsome man I’m supposed to meet!”

He chuckled again, a little too joyfully. “Eyore roux heim sausage meat.” His shoulders were wide, and his soft navy blue tee shirt fell straight down from his broad chest to cover what must surely have been a very hard, very flat stomach.

I looked away. “It’s a good thing our proprietress is so much fun to talk to or I wouldn’t still be here,” I said.

“He’s not the guy.” The shopkeeper flew past us, opened the door, and looked left and right. “I swear, he was here right before you came in.” She fluttered back, her gauzy purple clothes floating, her silver jewelry tinkling, her cheeks pink, the whites of her eyes flashing, her teeth gleaming, and her full lips parting—I hadn’t noticed before, but she was gorgeous, in the full bloom of sexual health, a gleaming little pigeon of a woman. She stood close enough to Alby to brush his arm with her dainty shoulder and bestow on me a concerned look. “You must’ve passed your date on the sidewalk.”

Alby stopped laughing. “Eau met a date year before me?”

I said, “There can’t be two tall handsome guys with accents in Dunedin.”

Flanked by us women, Alby laughed like the happiest hunk on the planet.

Editorial note: We hope you enjoyed this excerpt from Lisa Lanser Rose’s memoir in progress. Please check back again for future installments!

Lisa is the author of the memoir, For the Love of a Dog (Harmony Books), and the novel, Body Sharers (Rutgers University Press), which was a finalist for the PEN/Hemingway Foundation Award for Best First Novel. Recent essays and stories have appeared in The Florida Review, Superstition Review, The Tampa Review Online, Sugar Mule Literary Magazine, Ascent Literary Magazine, Saw Palm, and Word Riot. The essay, “Turnpike Psycho,” won the 2013 Florida Review Editor’s Award.

More from Author
Comments on “Casey and the African, Part 1”
No comments yet. Be the first!